Translate this text to: English Español

A Discussion with Alvaro Ramazzini, Bishop of Huehuetenango, Guatemala (Part 1)

Background: During Msgr. Ramazzini’s long service as a bishop in Guatemala he has engaged with the full agenda of social, economic, and political challenges facing his country. He is renowned as a courageous advocate for poor people, focusing intensively on many issues, including migration, extractive industries, and land tenure. Bishop Ramazzini has contributed over many years to the work of the Berkley Center (interview in January 2009) and WFDD. This discussion with Katherine Marshall took place on September 29, 2015 in Washington D.C., where Msgr. Ramazzini took part in a Berkley Center/WFDD consultation on research on development and religion in Guatemala. In this discussion he traces the path of his work as a bishop in rural Guatemala, discusses interreligious relationships today, and focuses on what he sees as the path ahead. This is a translation of a discussion in Spanish.
“Some Catholics don’t understand that there is a relationship between social commitments and faith.This is an issue above all with middle and upper class Catholics who don’t understand that to be Christian means to follow the path of Jesus Christ. In the rural areas, the people understand this because they live lives of poverty, they want to survive, they want a better way of life.”
Can you remind us about your journey to where you are today? Did you always know that you would become a priest? Of special interest is your current work and your perspectives about how the Church in Guatemala views the nation’s development challenges.
I have been a priest for 43 years, and I’ve been a bishop for 26 years. As a bishop I first served in the diocese of San Marcos, and three years ago I moved to the diocese of Huehuetenango. 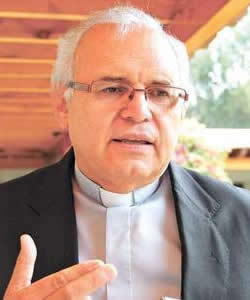