Another American: Identification While Abroad 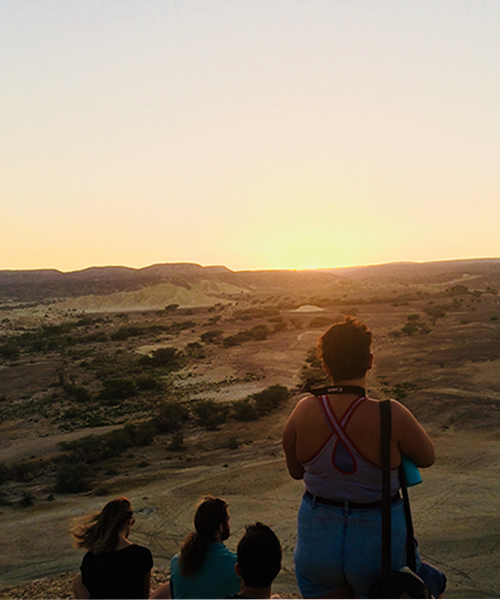 “Now surely that can’t be right?” A voice with a heavy accent drawls. I turn around to match the face to the cadence of an American South accent.

A tall woman dressed in red squints at the posted bus schedule, mouth twisted in confusion. Like me, she has dark skin, and curly, Afro-textured hair tied beneath a hair scarf (although her scarf is considerably more decorative and elaborate in its construction). Like me, she is also annoyed with the rowdy group of teenagers cutting in line for the 21:15 bus back to Be’er Sheva. These are where the similarities end, however. Before I can ask her a question, she switches from English to Hebrew, and I only understand parts of her speech—there is no bus now… next bus to Be’er Shefva (my home city for these short few months) does not leave until 22:15.

I grab her attention and we spend the next few minutes gossiping about how rude the teenagers are and which bus routes may be best for reaching home. I learn she is from Dimona, and that she is also from the Black Hebrew Israelite community that arrived in Israel beginning in 1969, mainly from Chicago. The Black Israelites are a group of African-Americans who believe they descend from the Twelve Tribes of Israel. They draw on the philosophies of Marcus Garvey, black separatism, and various traditions of the Jewish faith. They eat a vegan diet, serve in the Israeli Defense Forces, and are another multifaceted piece of Israel’s minority community mosaic.

However, the woman does not fascinate me because of her background. Rather, my fascination comes from realizing this unnamed woman could easily pass as one of my family members back home. In Israel, however, she is just another kind stranger willing to offer me travel advice and correct my American-accented Hebrew. Our similarities stop there. This experience made me realize just how differently two dark-skinned women can be perceived outside of the United States.

In America, a person’s multiple identities and backgrounds can be consolidated, or rather, forced into, a summary based on one’s skin-color, and typically through the binary of black or white. And although no country understands its communities perfectly, multiple identities are generally more commonplace and expected in Israel. Generally, a person’s religion and politics cannot be summarized or assumed by skin color, and unless someone wears traditional clothing, a person’s religious, ethnic, and cultural background is assumed to be more complicated than their outfit of choice that day.

Due to this expectation of diversity, most Israelis are not shy about asking where I am from, especially in a less-visited city like Be’er Sheva. Whereas in Tel Aviv or Jerusalem it is not unusual to meet many Americans, Be’er Sheva is a much less visited place. I am occasionally an “anomaly” in a city that is not known for tourism. And even though I do not identify with any recognizable community here, I find it surprising to see how easily I blend in. In most of my social interactions, if I am singled out, it is only because I am American, not because of what I look like.

Thus, my nationality plays a far more defining role in my identity than it does back home. I initially expected to be remembered by my race or ethnicity, but have only been referred to as American. Consequently, my mannerisms are judged based on what Israelis see in film or learn from cousins abroad about Americans. I even had one German exchange student tell me of how she grew up watching A Different World and was thrilled to braid her hair like the American girls on TV, and go to a historically black college/university when she grew up. These characters were never “black” to her; they were just Americans.

As the woman and I part ways at my bus stop, I come to the realization that the identity of “American” is one I am not accustomed to, or even necessarily comfortable with at times. Usually there is some racially or ethnically-related caveat to the term that is simply not necessary abroad. However, I am curious to navigate Israel with this new perspective and see what kinds of conversations this “American” will have.