A Discussion with Dr. Jacques Sebisaho

Background: This conversation took place on September 26, 2012 between Michael Bodakowski and Dr. Jacques Sebisaho as background for a workshop on the roles of faith-inspired actors in energy access initiatives. Dr. Sebisaho spoke of his work at the intersections of health care, faith, and energy through the founding of Amani Global Works, which provides accessible and affordable health care on Idjwi Island, Democratic Republic of the Congo (DRC). He shared a powerful anecdote about how light provided by a solar suitcase acquired through a partnership with WE CARE Solar made it possible to save the lives of all the patients who came to his clinic one night during a major cholera outbreak. Dr. Sebisaho also emphasized his work with the Community of Sant’Egidio and the role of the Catholic faith, Church dioceses, and parish networks in helping to provide health care and energy needs in the eastern DRC. The Church is crucial there for all life issues, and energy is a critical part of those life issues.

How did you come to work on the issues you are focused on today? Why energy?

I am originally from the Democratic Republic of the Congo but finished my medical school in Rwanda, and then went on to an internship and residency in Brussels. I came to the United States in 2002, where I am based now. In 2009, I founded an organization called Amani Global Works with the objective of bringing health care to poor areas. In early 2010, we established our first clinic on Idjwi, an island between Rwanda and DRC. There wasn't really a health care system there, with only one hospital on the southern tip of the island, and maybe 50,000 people who did not have access to healthcare. In 2011, there was a cholera outbreak, and this clinic didn't have proper electricity to deal with the crisis. It was working on a small generator running on oil, so we relied mostly on kerosene lamps. Most of the people with symptoms showed up during the night after coming back from the fields or the market. It was really too dark to treat everyone, and we had to move patients from place to place to where we had light. We lost so many people to cholera because we didn't have enough medicine or tools, but also because we couldn't properly take care of them in the dark.

In November and December of 2012 there was another cholera outbreak, but this time we had a solar briefcase from WE CARE Solar, an organization founded to improve health care through solar energy resources. We could move the solar suitcase from place to place instead of the patients. Since cholera patients need to be isolated and should not be moved, this was very helpful. Nobody died. This was huge for the island. I credit part of this success to the morale that was brought to the people because this light existed. The community was so happy. We left one light outside of the clinic where people would gather. It became the place for the villagers to come after work when it was dark, to have their own meetings. Just having the light meant that people could function after 5:00 p.m., and this was a huge step forward for the communities where we were working in DRC.

What was your partnership with WE CARE Solar? How has it evolved?

I was connected to WE CARE Solar through our mutual partner—the Segal Family Foundation in New Jersey—who supported our work and funded us to pay for our solar suitcase. From there we partnered with WE CARE Solar, and we are still working with them to some extent. We haven’t quite gotten solar power to other parts of the island or eastern DRC yet because right now we are focusing on opening more clinics. We have one clinic and a big hospital (with more than 10,000 square feet of space) that will open next January, and we are starting to build two more clinics for next year. We are still working on better energy sources as well, since the solar suitcases are more suited for a household or clinic than for something bigger like powering hospitals, operating rooms, or pharmacies.

Looking at the issues broadly, how does energy access intersect with the most pressing development issues in the Great Lakes region of Africa where you work?

In DRC there is so much that must be done from health to education to infrastructure. We need everything. We have close to 6 million people living in poor areas in DRC who are moving from rural to urban areas. We have two main cities—Goma in the north and Bukavu in the south—with two huge populations. Rural areas have become abandoned, and people who live in those areas really have nothing. They suffer from diminished food security and don’t have the funds to pay for school or healthcare. We have a catastrophic situation in these areas.

On top of all that, we see communities that have not had any sort of energy before this period. This causes many problems. For instance, some women are raped when it is too dark in the evening. People think that it is too dangerous to go outside at night, and so they won’t go to the market because they are afraid of walking home in the evening. Having light in these areas can solve many problems. It would decrease the rate of rape, and it can bring more hope to these communities. People can feel as though they can function. People can go to market, add more hours to their work in the field, and gather and meet as a community to talk about their needs.

How does faith play into the equation? Who are the actors in the Great Lakes region, and why does faith matter there?

Eastern DRC is very Catholic and Christian, so faith really inspires many initiatives. Based on my experience and work, I can tell you that almost everything we are doing on the ground is inspired by faith. Personally, as a Catholic, I am inspired by the social teachings of the Catholic Church. But additionally in the wider DRC, something that is very important that not many people know about is the role of the Catholic Church. It goes far beyond spiritual and pastoral matters into every aspect of life. For example in the Diocese of Bukavu, Archbishop François-Xavier Maroy said that bringing energy to most rural areas can change the way communities function. For that reason he has encouraged partnerships and initiatives for energy access.

If you don’t include faith in an effort to reach out to poor communities to provide light or healthcare, it’s very hard to reach out to people. Especially for us (working in medicine in a poor and isolated area), you need to consider and go through the Catholic Church if you really want to reach the communities. That includes solving the challenge of providing energy. They are the effective administration centers in many rural areas that provide the networks that help anyone interested in providing services to the poor. In our own efforts, we could not have access to any place unless we went through the Church. My personal experience naturally led me to work with the archbishop, organizations like Caritas Internationalis, the government office for the archdiocese, and various religious leaders and communities.

Could you tell us about your work with the Sant’Egidio movement?

I was introduced to members of the Community of Sant’Egidio while I was working in Rwanda in 1999 and immediately went to start a chapter in eastern DRC. Since my wife and I started the community in DRC it has spread widely to the rest of the country. In 2001, I was invited to go to Rome for their meetings and met more members there. When I came back to New York in 2006, I became part of the community here as well.

We are still both part of Sant’Egidio. Our community in DRC right now is working with educating youth, visiting prisoners, and caring for sick children. The community has not specifically looked at the energy issues, but their work with HIV/AIDS, nutrition, and other initiatives have all indirectly supported and necessitated an increase in energy access.

What do you see as the main issues at the intersection of energy access and humanitarian relief? Does faith have a role?

Faith is very important to my humanitarian work. It teaches us to provide for the basic needs of others whose needs are not being met. And energy—like food and water—is a basic need that is required in life before we can do anything else. That also includes what I can do to provide health services. So my faith and humanitarian work have come naturally to focus on energy.

When you hear about villages or communities, the big challenge is the darkness. For clinics, you lose so many people if you don’t have enough light at night. Even during the day—to operate a microscope or charge a cell phone—is a huge obstacle. But we can bring them light. So energy plays a major role in my faith-inspired humanitarian work. 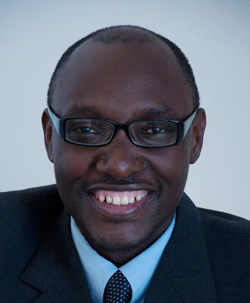