Background:This discussion between Venerable Yos Hut, Katherine Marshall, Augustina Delaney, and Ethan Carroll took place in Phnom Penh. Ven. Yos Hut makes a case for the centrality of Buddhist practice, particularly wisdom and compassion, for both promoting development and healing the wounds of Cambodia's past. He suggests that the Cambodian sangha should continue to improve its organizational capacity to promote development in a strategic way. He reflects on the trial and verdict of former S-21 warden Kaing Guek Eav (Duch) and on his understanding of punishment and forgiveness.

What are the main ways in which you have been involved in Cambodia’s development choices and challenges?

Following the Pol Pot regime and the conflict with the Vietnamese, I did not return to Cambodia until 1990. I came then for a short visit, and then returned more permanently in 1992, after the start of the UNTAC mission. Between 1988 and1992, I was in Thailand helping at the refugee camps with the United Nations Border Relief Operation, advising on education and human rights. We helped in the temples there, and I conducted training seminars for community leaders and Buddhist teachers. The UN asked me to serve as a Khmer and Buddhist cultural advisor as they developed their human rights program’s curriculum in Cambodia.

Since I returned to Cambodia, I have provided advice and consulting for several different organizations. They have included a human rights organization, ADHOC, and the Youth Resource Development Program (which is an important youth organization that does good work). In fact, I recently proposed a young monk to take over my work with that organization since I can no longer serve (I have exceeded the maximum of two terms of four years each already!).

When I first returned to Cambodia, I stayed at Wat Sra Van, but am now at Wat Lanka. I am not involved in the running of the Wat or in the Sangha. I meet people, meditate, write, and teach.

How do you see the Buddhist beliefs shaping the roles that Cambodian monks today play in development-related work?

An essential problem is the low level of knowledge about Buddhism in Cambodia, across the board. Monks need more opportunities to learn about Buddhism. There is much room for misinformation and superstition. They need knowledge and maturity, which will come from more training in Buddhist doctrine and practice. They need to learn Buddhism before they can help anyone; one must be able to help oneself before one can help others.

More broadly, the education level with respect to both general cultural education and spiritual education in the country is improving step by step, and that includes among the young monks. Cambodia has very few quality teachers, and teachers are underpaid throughout the country. The place where people need to learn their culture is in schools. That is true for both religious people and lay. Very little is taught about Buddhism in the curriculum in schools today. They learn the rituals, and how to perform at festivals. Most of this training takes place at the individual wat.

I find that people are re-learning Buddhism little by little. You see signs of it every day. Some people are qualifying to be Buddhist teachers. Individuals have more discipline. And there are radio programs on Buddhist topics broadcast every day. Kol Pheng supports one such radio program; he was formally the president of Pannasastra University. The radio station has many programs with Buddhist teaching, including seminars organized by NGOs for monks and community leaders. People can call in with questions.

But the problem is that these broadcasts do not reach all young people, although many young people certainly listen to them. Only some parts of the population listen to the radio. And what we need to do is to reach the young people. Unfortunately, they seem to prefer music to learning about Buddhism!

Do you see any charismatic younger Buddhist leaders emerging in Cambodia? Someone along the lines of the recently “chosen” Young Imam in Malaysia (who was selected in a popular television program and is 26 years old). Are there such popular Cambodian Buddhist monks?

Yes, there are both monks and lay Buddhists who are emerging within the young generation of popular Buddhist teachers. As I said before, some of them are on the radio or on TV. There is some programming sponsored by the Minister of Cult and Religion, intended to educate people about Buddhism, morality, and environmental issues. I do not think that television programming is a substitute for teaching Buddhist principles at school in the curriculum. That is the only way to reach young people.

Do you see this new kind of leadership coming from the younger monks?

That is not clear yet. Some monks are very spiritual, others are influenced by the outside world. Some go to University and learn about subjects that have nothing to do with spirituality, but they should continue to learn Buddhist theory and practice, too. If monks keep learning, they will gain the maturity they need to become leaders.

And you think they will leave the monkhood?

Yes, but it is normal for monks to leave when they want. They are free. This is why Buddhist schools need to emphasize practice and meditation. Many currently focus too much on theory. They need to focus on knowledge of Buddhism. In Cambodia, 95 percent of the people say they are Buddhists. Everyone needs to learn more about Buddhist theory and practice and what it has to teach them.

So you are saying that training in theory alone makes it harder to engage communities in development?

Yes. For everyone, including those in political life, learning Buddhist moral practice will ensure that they act correctly. In Buddhism, we must train to understand our self and to live and work in the right way. Many Buddhist teachers, including the Buddha himself, talked about this. Sulak Sivaraksa talked about this at a seminar in Thailand organized by a group led by the Archbishop of Canterbury and the president of the World Bank [WFDD] about 10 years ago.

If we ask “How do we learn wisdom and compassion, or political competence and honesty?” the answer is the same: right thinking, mindfulness, and meditation.

More importantly, I do not think that Cambodia needs to look only outside for answers. We should take what is good, but we try to copy everything from the West—the education, development, its television—but we know they have problems, too! In life, economy, production, consumption. They know they have made errors and face limits, yet they force developing countries to follow their same societal mechanisms, to do the same. The worst aspects of development are the easiest to copy! But maybe a more holistic approach to development is appropriate.

You have spoken often about the issues of memory and justice for the Khmer Rouge. What was your reaction to the verdict in the Duch [Kaing Guek Eav, former Khmer Rouge prison chief] trial last week?

I have already said everything I have to say about that in the past, so I have not made much comment about it now!

Some people say that 19 years more is not enough time in jail and some are not very happy with the politicians. People continue to suffer because of Khmer Rouge. But if those suffering had invited qualified monks to talk about it, people would be better able to understand what happened and why. If they understood the Buddha’s teachings about impermanence and suffering, they would be able to understand the atrocities of the past and start a new life. Buddhist teachings can help to explain what happened and why and help to move on from the past, to start anew, to live in the present, the here and now.

With that said, I think that the tribunal is an important part of coming to terms with the past. I disagree with people who say there should be no trial, that everyone should be pardoned. We need to clarify things and write out history. If we do not, then other people will, and there will be competing versions of history. I believe that assigning responsibility is important; we cannot reject responsibility. This is a human story and we need to understand it. It is not about revenge. But understanding our history is about survival for the next generation.

Instead of discussing whether 19 years or life in prison is an appropriate amount of time for Duch, I have a better idea. This solution would work for anyone in the international community who has been responsible for a tragedy on a similar scale. We should not put these people in jail, but instead put them in a museum so we can study them! We would provide high quality education and documents to them, fine teachers. Maybe they will recognize the reality of what they did. They might accept their responsibility and overcome their pride. Duch learned the communist ideology and thought it was a good thing to do. He says all he did was to obey, that he was afraid of his chiefs. Now he has realized his errors, at least in part. We can help them to change and recognize the truth. We have to believe that the truth can change people. And we could learn from seeing them as they come to terms with what they did.

Along those lines, there are reports that some Khmer Rouge leaders have embraced Catholicism because of its doctrine of forgiveness. Do you see that as a major difference with the Buddhist approach?

Even in Buddhist communities there are breaches of rules, and the sangha has a judgment process to correct the problem. The idea is not to punish, but to correct, to ask someone to change, to offer help through compassion. Physical punishment is less important than education. That is why I think we should put Duch in a museum, a special museum for genocide, rather than punish him physically.

Thank you for speaking with us this morning and sharing your wisdom. Do you have any advice for us as we pursue our explorations of faith and development?

No, but one last thought: Education is going to be very important in Cambodia’s continued development, but what people really need to learn is wisdom and compassion, the middle path to improve society. 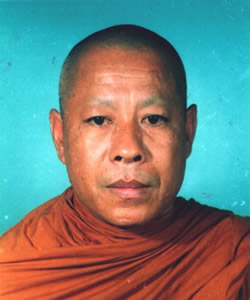