A Higher Education: Transcendental Meditation at the Chea Sim University of Kampucheamar

Aug 9 2012
August 9, 2012
Water buffalo lowed and lumbered outside of the several multimillion-dollar buildings under construction at Chea Sim University of Kampucheamar (CSUK) in rural Prey Veng. Accustomed to viewing such odd sights in Cambodia, Laura and I were unfazed by this dichotomy. However, the view was unique in its reflection of a university and nation in transition.

CSUK has experienced major administrative and curriculum reforms since 2008, when it transitioned from the previously named, foreign-funded Maharishi Vedic University (MVU) into a local public and privately funded institution. Laura and I aimed to explore the impact of this transition on the university’s religious and philosophical teachings, especially in regards to the contentious removal of the Transcendental Meditation (TM) programming from the university’s core curriculum. This transition also interested us as it reflects the development of Buddhism and meditation in a Cambodia that is still redefining its religious hierarchy since the eradication of traditional Buddhism under the Khmer Rouge regime.

Our tour that day began with a general history of the university’s founding as Maharishi Vedic University and the teachings of its original namesake, the famous Maharishi Mahesh Yogi. The Maharishi created the “school” of Transcendental Meditation in the 1960s and left his native India to globally promote his meditation technique and train TM practitioners. These practitioners then spread his teachings further in hopes of creating the Maharishi Effect—a belief which claims that peace and improved quality of life will come to countries with a square root of one percent of the population practicing TM each day. In an attempt to bring the Maharishi Effect to every country in the world, TM has gathered thousands of followers and is currently one of the most widely practiced and researched meditation techniques. High profile proponents of TM have included the Beatles, Oprah, and David Lynch (who founded the David Lynch Foundation for Consciousness-Based Education to promote TM).

During this global expansion of the Maharishi’s teachings, TM practitioners went to Australia, where they attracted followers and eventually created NGOs like Australian Aid for Cambodia (AAFC) to spread the Maharishi Effect. Cambodia was targeted in the 1990s as a priority site because AAFC volunteers believed that insight meditation would help in the recovery from civil war and genocide under the Khmer Rouge regime. They hoped that TM could provide solace and insight to people as they overcame obstacles ranging from addiction to death. With these aims, they founded the Maharishi Vedic University in 1992 as one of the first universities in Cambodia to open after Khmer Rouge while refugees poured in from camps in Thailand. The AAFC volunteers in Prey Veng aimed to “train a new generation of leaders free from the stress, fears, and corruption that have been the legacy of Cambodia’s recent history.” Their mission in founding MVU was not only to increase the capacity of Cambodia’s human resources, but also to help develop the consciousness of its people. In order to achieve this, AAFC brought over 250 volunteers to Cambodia from 1992 to 2008, comprised predominantly of foreigners teaching though translators. This allowed them to offer affordable tuition, set at approximately $200 USD per year, to students in rural Cambodia.

After receiving this brief history of the TM movement and MVU’s founding, Laura and I learned about the integration of TM into the curriculum in a two-hour private audience with two of the university’s former TM teachers. They told us that the naming of MVU—with maharishi meaning “great knower” and vedic meaning “pure” or “complete”—reflected the university’s mission to offer a “complete knowledge” which can only be attained through the study of Transcendental Meditation. Thus, when the AAFC opened MVU, TM became a critical component of the university’s curriculum as a “technical” program that provided the students with both objective and subjective knowledge. The entire first month of classes at MVU consisted solely of physical TM training and a Science of Creative Intelligence (SCI) program that explored the practice’s theoretical basis. Regular academic subjects only started in month two. Throughout their four years at the university, the students were required to engage in twenty minutes of TM each morning before classes and twenty minutes of meditation each evening.

The teachers who spoke with us claim that meditation practice sessions increase student happiness, mental quickness, and orderliness. Practitioners report better sleep, higher levels of energy, increased peace in personal relationships, and an improved interaction with one’s wider community. Additionally, the teachers emphasized that TM is not a religion, but simply a technique that improves learning. They likened the technical learning and practicality of TM to programs in computer or telephone repair.

When AAFC suddenly pulled its funding and stream of teachers from MVU in 2008, the TM curriculum was discontinued under the new funders: the Ministry of Education, the Ministry of Youth and Sport, and a collection of powerful individuals from Prey Veng province. Chea Sim—the university’s new namesake, incumbent president of the Cambodian Senate, and Chairman of the ruling Cambodian People’s Party—was among these funders and required the removal of the TM curriculum as a condition of his contribution. Though the current university leadership says that TM is a waste of time, the teachers claim that its removal is predominantly the result of this financial conflict of interest.

Though the removal of this crucial part of the curriculum and mission of the university seemed odd to us, other downfalls of TM beyond simple funding politics at MVU and throughout Cambodia, surfaced as Laura and I continued our tour. A clue to the weaknesses in the TM programming was suggested in the mention that TM had actually grown out of favor at the university even prior to the change in funders. The reason for the inability to sustain TM education at MVU became more apparent as Laura and I watched an hour-long educational video containing a series of clips from American news stations showing the benefits of TM in classrooms. Watching Dateline and NBC interviews with American teenagers suffering from ADHD and practicing TM to pay attention at school struck Laura and I as oddly out of tune with the context of Cambodia and the experiences of most Khmer students. As American teenagers offered testimonies on how TM helped to alleviate their stress, distraction, aggression, and angst, Laura and I asked our hosts if the news videos made sense or felt relevant to Khmer students. We were told that the videos didn’t make much sense, even to the TM teachers at CSUK, because the 6 hours of materials had never been translated into Khmer. In addition to the totally out of context DVD collection, Laura and I were also given a wide array of print literature about TM that was left by the Australian volunteers. There is certainly no shortage of learning materials about TM at the university, but the accessibility of the materials and TM practices to Cambodian students is certainly questionable.

The issue seemed to extend beyond even the university curriculum. The TM teachers at MVU are still able to teach informally to those who are interested to learn, but this number has become quite small. Laura and I still thought that perhaps TM has experienced more success outside the university setting, since we have viewed a wide array of meditation centers and techniques gaining successes in Phnom Penh and the countryside; however, when we asked if TM held much appeal to Khmer people, the CSUK TM instructors told us that the practice was not growing in Cambodia as rapidly as they had hoped. They believed that the reason behind this slow growth was that Cambodia is so poor that people have to concentrate all their efforts on simply acquiring the necessities to live and thus are too busy to meditate for 20 minutes each day. The instructors also mentioned that business was a significant obstacle to meditation practices in Cambodia—namely because people have a great desire to make money which distracts them from spiritual pursuit.

I saw several other potentially more influential obstacles. First, the TM technique itself is purposefully and accidentally somewhat of a mystery to learners. Lack of proper educational materials probably extends outside the university, but this is coupled with the fact that TM can only be practiced and taught by a certified TM teacher who shares the secrets of the technique. Everyone is given a mantra specific to them which they are told never to share, and an added level of secrecy surrounds each TM practitioner’s individual mantra. Without proper educational materials, the intended mystery can become unintended confusion. Second, the typical TM training course lasts four to five days, and since a certified TM teacher is required, the cost for Khmer nationals is currently around $100 USD; many cannot afford this training or time investment. Third, TM is a form of mantra meditation, unlike the traditional Cambodian forms of Vipassana meditation that are familiar to the Khmer people. Lastly, meditation for Khmer people has the connotation of a practice only carried out in instances where one has sinned, leading to negative associations for a meditation like TM that implies daily practice.

After some further discussion with the TM instructors over lunch, Laura and I were spared the remaining five hours of educational DVDs because we had to leave early in order to beat the dark and the impending monsoon. We had the sense that there was much more to learn, but we left CSUK that day with an extensive understanding of the history of TM, Cambodian attitudes towards meditation, and higher education in Cambodia.

The story of CSUK’s transition exemplified the complexities of religious practices and sentiments in a nation where the religious hierarchy has really only formed within the past 20 years. New monks have been trained and Khmer Buddhism re-invented since the eradication of the Sangha through the killing of monks by the Khmer Rouge. CSUK’s experience with TM is a reflection of a wider Cambodian society in flux as it rapidly develops both economically and culturally. That transition requires complex compromises between foreign practices (like TM meditation) and the re-establishment of local traditions and beliefs. The evolution of the Chea Sim University of Kampucheamar from Maharishi Vedic University shows Cambodia’s shift away from foreign donor built and funded schools and programs, as the government and people begin to set educational priorities of their own. The future of TM at the university and in a wider Cambodia seems unclear.

One thing is for sure: though the water buffalo may continue to low and lumber as if nothing has changed, the metamorphoses surrounding them are likely to continue at Chea Sim University of Kampucheamar, as religious practices and private means of thought continue to shift in a rapidly changing Cambodian governance and society. 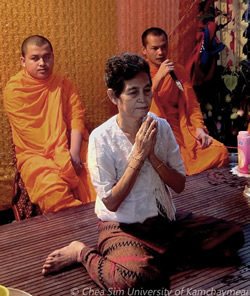