As I stare out at an expanse of lowland forest recently flooded by the monsoon rains, it doesn't take long to see the futility in attempting to keep my shoes dry on this hike. Seeing no other course of action, I roll up my pant-legs and slog ahead through the thick mud feeling oddly liberated by the experience. When following the middle path, I suppose one has to be prepared to get one's feet wet. Even though my moment of hesitation has left me a little behind pace, it's not too difficult to spot our guides up ahead, deftly weaving through the landscape, their bright saffron robes standing in sharp contrast to the dense tangle of brown and green that surrounds us.

Our guides on this walk in the woods are a handful of monks from nearby Sam Raong Pagoda, and we are wandering through the Monk's Community Forest (MCF), which they help manage. The MCF is an 18,261 hectare protected area in Cambodia's Oddar Meanchay province near the northern border with Thailand. We've come here to speak with one monk in particular, Venerable Bun Saluth. He created the MCF in 2001 and has just returned from a trip to New York where he was a recipient of the prestigious Equator Prize. The UN-sponsored award recognizes outstanding community efforts to reduce poverty through conservation and sustainable use of biodiversity. Of the eight awards given for Asian initiatives the MCF was singled out for special recognition. He's up ahead with my camera around his neck snapping abstract pictures of the high canopy above; occasionally he turns back to document the two sweating westerners struggling to keep up.

Ven. Saluth has a youthful energy, a wide smile and an infectious laugh: all powerful tools in the effort to win over local villagers to the principles of environmental conservation. As he explains, the idea for the MCF was inspired after five years spent in studying in Thailand, where there has been a growing movement of so-called "ecology monks," a particularly active subset of Engaged Buddhism, since the early 1990s. After being inspired by some of the conservation tactics of this new movement, including the tree ordination employed by many of these monk activists, Ven. Saluth returned home with a new appreciation for the sprawling forests that blanket his district. "When I returned home to Oddar Meanchey I realized the importance of these forests... In Thailand they have largely lost their forests and the government must replant huge areas. In Cambodia we should treasure the forests that we already have and preserve them for the next generation."

Indeed, the difference in forest cover between the two countries is striking. Thailand has lost nearly two thirds of its forested area since 1936 when it was estimated that 70% of the country was covered. In response to some of the deadliest floods in the nation's history, the Thai government instituted a logging ban in 1989 and now claims that forest cover in the country has stabilized at 25%, though many external sources claim the actual percentage to be closer to 15%. The 1989 Thai logging ban, while proving a boon to Thai forests, has had severe implications on environmental conservation in neighboring countries, particularly Cambodia, where much of its timber is now sourced. The vast majority of this timber trade is unregulated and clandestinely carried out by cross-border smugglers. The percentage of forested land in Cambodia currently stands at 59% but these swaths of old growth forest are increasingly under threat, not only from illegal logging but also land concessions for the expansion of large-scale commercial agriculture in cassava and sugarcane. Cambodia's rate of deforestation is estimated nationally at a 0.5% loss annually, although the figures vary greatly from province to province. The situation in Oddar Meanchey is among the most dire in the country with a 2.1% rate of loss, according to PACT, a partner organization working in the province.

For Ven. Saluth forest conservation is an elemental aspect of the monkhood. He explains, "The Buddha was born under a tree in the forest, he meditated under a tree in the forest, he achieved enlightenment under a tree in the forest and he died under a tree in the forest. You can say that the forest is the house of the Buddha. Since monks are considered sons of the Buddha, we have a responsibility to protect the house of the Buddha." In order to protect the Buddha's forest home, Ven. Saluth and MCF staff work closely with leaders from the six surrounding villages on forestry committees. These committees organize patrols designed to deter illegal logging. Since they don't have the authority to levy fines, the patrols often employ Buddhist morality, including the five precepts, to educate the offenders on the value of conservation - a value, they hope to explain, that is not only spiritual but financial as well. A key aspect of the project is livelihood diversification support through sustainable harvest of non-timber forest products (NTFPs). Mushroom cultivation has proven a lucrative enterprise for many villagers surrounding the forest, earning some families a supplemental income of as much as $150 a month. Fishing and fruit collection are also allowed so long as only traditional methods harvest methods are utilized. As we continue our walk, the evidence of another livelihood activity can easily been seen: resin collection pools have been cut into the trunks of many of the larger trees. These deep gouges blackened by fire seem to give the trees gaping mouths, many reminiscent of set pieces out of a Tim Burton film. Trees of the genus Dipterocarpus can be tapped for chor tuk resin, sold as a wood sealant; the fire helps stimulate resin production. A single tree can remain productive for over 60 years.

In this idyllic landscape with the streaks of mid-morning light dancing lazily on the forest floor, it's easy to forget this area's insidious history. After all, it was from bases here that the Khmer Rouge staged the first attacks against the Khmer Republic and back to these bases that they retreated after the Vietnamese invasion. This region was the final stronghold of the Khmer Rogue, only coming under government control in the late 1990âs, some 20 years after the regime's overthrow. Anti-personnel land mines still litter some areas of the MCF, though Iâm assured not in the areas we're strolling through today. As we sit down for lunch in a small clearing next to a muddy brook, Venerable Sov Kosal, another monk at Sam Raong pagoda, mentions that trees held a special significance during that dark period. "At that time there were no schools and no pagodas. I went to study in the trees. The tree was my school and my pagoda." Now these trees represent a path out of poverty for the rural poor of his community.

Ven. Saluth sees the MCF as only one small part in a larger effort to expand community forestry schemes to all corners of the country. The MCF is one of 13 forests linked in a pilot program to develop sustainable funding mechanisms through REDD, a UN scheme to realize the financial value of carbon stored the forests of developing countries. It is estimated that international financial flows from the reduction of carbon emissions through REDD could top $30 billion USD globally. The outcome of this pioneering effort could have a great impact on the future success of community forestry projects in Cambodia. There are already 94 community forests registered with the government of Cambodia but there remain significant challenges both for further expansion and long-term security of those already registered. The legal process from application to approval is a long and often tedious one and can prove a great test to the organization of the community groups that apply. Once legally registered, the 15-year fixed term of community forest registration also creates some anxiety among these communities. Many degraded areas will take 15 years simply to become productive and with their future legal status in question some may be reluctant to make this type of investment. These communities need committed leaders and dedicated advocates if they are to succeed in the establishment and defense of community forests in Cambodia. Ven. Saluth sees this as an opportunity for monks to bring to bear their unique role in their communities. As community advisors they can educate villagers on their legal rights and the advantages of conservation efforts. The pagoda can serve as a staging point for the initial organization of forestry committees. But with so much of this initiative embodied in one pagoda and one monk, we asked Ven Saluth what would become of the MCF if he ever decided to leave the sangha. He replied, "It takes a lot of time and dedication to promote conservation. Without myself and the other monks at this pagoda the forest would have no advocates. I have made a commitment to this forest." 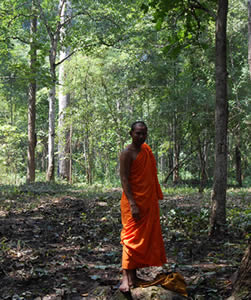