Apr 23 2013
April 23, 2013
From December 11-15, 2012, the Jesuit Service Cambodia hosted an interfaith workshop entitled “Act Justly, Love Tenderly, Walk Humbly.” This workshop provided an opportunity for people from various faith traditions to share their personal stories and experiences, learn about insights from different faith traditions, and decide on actions to take regarding key social and environmental issues facing Cambodia and the wider world.

The workshop took place at the Jesuit Service Metta Karuna Center in Siem Reap and drew from a range of experiences and faith traditions, with an ultimate aim to open avenues for dialogue, discussion, and collaborative action towards a just and peaceful Cambodia.

I was unable to attend the workshop (I was back in England for the holidays), but upon my return I managed to speak with Sister Denise, Jesuit Refugee Service Executive Director and organizer of the event, about the workshop. “It was a big success,” said Sr. Denise, “We began the program with a ritual feet washing of the participants and listened to the stories of those who had been injured by war, generally displaced, or affected by environmental destruction.” She explained that theological reflection was integrated into the responses to these personal stories. Through small learning circles, four key speakers were able to provide greater detail to the issues raised by the experiences shared. Sr. Denise explained that over the weekend, participants considered ways to encourage the growth of justice and peace in Cambodia. On the second day, Bob Maat, a former Jesuit who converted to Buddhism and has extensive knowledge of the Sufi tradition, was able to give a reflective talk about his experiences within these three distinct faith traditions. This was then followed by a sharing of insights from small, interfaith learning circles.

Sister Denise also explained that there was a Wall of Reflection introduced to encourage active reflection over the course of the three-day workshop. She commented that it was highly effective in inspiring participants to share reflections and information that they had learnt from the day. The workshop concluded with a reflection on what blockages had moved or insights had been raised for each participant over the past three days. It also sought to create responses on personal, local, and regional levels to coordinate actions together against issues relating to displacement, disability, the environment, and climate change.

One of the first responses from this workshop has been the interfaith tree planting which took place during "World Interfaith Harmony Week" which was suggested at the UN General Assembly in September 2010. In his blog posted on January 15, 2013, Max Ediger from the Mennonite Central Committee, outlined the program of the interfaith tree planting event which would take place at Choeung Ek Killing Fields, just on the outskirts of Phnom Penh, on the January 27. The program would begin at 3 pm with a one minute silence to pay respect to the souls of the Khmer Rouge victims, followed by speeches from a Buddhist monk, a Muslim Imam, and a Christian pastor. The event would conclude with the planting of fifty trees within Cheoung Ek.

Gabby Lamug-Nañawa from the Jesuit Service Cambodia commented in her blog post on March 4 why the common activity for celebrating World Interfaith Harmony Week in Cambodia has been tree planting: “Planting trees is a positive act for others and for creation that easily brings people together.” Another tree planting activity during this week was an initiative from the Cambodian Interfaith Cooperation Forum which invited children from some of Phnom Penh’s poorest communities to plant trees to promote interfaith harmony, justice, and peace.

Environmental projects are non-political and much easier for interfaith cooperation. The other issues which were raised in the Jesuit Refugee Service Interfaith Workshop--such as eviction, displacement, and statelessness--are exponentially more difficult to formulate a collaborative and peaceful action plan, both in the eyes of the Cambodian government and the different faith traditions. The issues of eviction, displacement, and statelessness create a solidarity and identity in suffering and persecution which is often entangled deeply with religious identity. Those identities are already very separated, as one can observe especially on village levels. In one village that former WFDD fellow Jenny Cimaglia and I visited during our field trip to Ratanakiri province, the whole community was living in an area no bigger than a football pitch, yet the Muslim community did not speak to the Christian or indigenous Jarai communities, and the Christian or Jarai communities would not speak to each other or with the Muslim community. This stark separation is an extreme, but it is still a representative example of something extremely prevalent in rural Cambodia. A friend of mine also recently explained that it is very difficult to be a Cambodian Christian outside of Phnom Penh or Siem Reap because villagers feel threatened and then react with persecution and ostracism which in turn links back to the fundamental concept of identity and separation.

This workshop hosted by the Jesuit Service sought to raise awareness of important issues in which all religious communities need to unite behind in order to ensure a just and peaceful country. I look forward to learning more from them about other activities and collaborations which may follow. 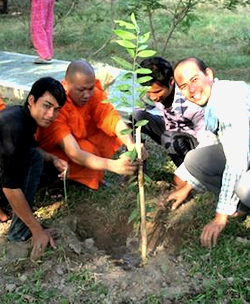