Alternative Forms of "Religion" and "Development"

Feb 2 2012
February 2, 2012
like silent earthquakes we shake
hungry like young lions we defying the odds
prayin to God Lord give us the strength to carry on
so i write to redefine the stars
"Why I Write," Kosal Khiev

Well into the third year of its pilot initiative in Cambodia, World Faiths Development Dialogue has interviewed many of the “major players” in faith-inspired development work currently active in the country. Occasionally, as a fellow in the third of year of the project, I am fortunate enough to come across a new actor on the scene or someone working independently who aspires to undertake development work through their faith in an interesting way. Through these encounters I am learning to approach the concept of “development” from a broader perspective, exploring and expanding its definition. I am also interested in exploring alternate faiths, outside of the major world religions. I have found that there are some people doing excellent work in Cambodia that are inspired by their faith or personal relationship with God which falls outside of what is normally termed “faith-inspired.” Such was the case when I first came across Kosal Khiev in Phnom Penh, when I attended his first public performance in Cambodia. Khiev is a poet and spoken word artist who draws inspiration in part from his relationship with God and religious background. His spoken word aims to provide inspiration and beauty to others struggling, constituting a distinctive type of “development” work. Khiev has worked with at-risk youth in the past and currently teaches creative writing in Phnom Penh, while also providing information and support for returnees. However, Khiev touches and impacts the largest number of people in Cambodia through his art. Khiev’s evident spirituality intrigued me, and I was eager to speak with him about the narrative of his life and to learn more about how faith, God, and religion inspire his work and art.

Like many artists, Khiev’s life story is inseparable from his oeuvre. Khiev was born in a refugee camp on the Thai border, and in 1981 his family came to the United States as refugees. They were settled in California public housing and attempted to build a new life in a new country, while at the same time dealing with many intergenerational and cultural differences. Khiev’s family had deep roots in Theravada Buddhism, and his grandmother had been a donchee, or wat granny. He recalled a friend of his grandmother’s, another wat granny, read his palm and recognized in it one of the thirty major marks of a Buddha’s enlightened body, specifically the smoothness of his (Buddha’s) hand. The donchee prophesied that Khiev would touch many lives but would undergo much suffering himself, a memory which Khiev said he recollected much later in life. After coming to the United States, the second eldest of Khiev's brothers converted to Christianity, becoming a Southern Baptist pastor. Later, when Khiev was in elementary school, the entire family converted to Christianity, including their grandmother, the donchee. He remembers the great impression that her conversion left on him, as the linchpin of their family; everyone else’s conversion, he thought, was a matter of following suit. Khiev, in recalling his close relationship to his grandmother, was marked by her conversion, discovering his own faith as a Southern Baptist. Ultimately, the family’s religious transformation would influence Khiev’s life in a huge way.

One of the largest impacts of his family’s conversion was that, at 15, Khiev was sent to live at the New Bethany Home for Boys, a Christian reformatory school in Louisiana run by Southern Baptists. Khiev was sent there, he said, because his family felt that he was heading down the “wrong path” and thought the school would do him well. The New Bethany Home for Boys housed roughly 90 boys from the ages of 8 to 18 and was built on principles of worship, hard work, and discipline. Khiev's days there consisted of bible study and farm work, attending church services on both Wednesdays and Saturdays. His faith as a Southern Baptist was steadfast and fervent at the time, although Khiev attempted to run away from the school on several occasions to escape its strict lifestyle and corporal punishment. It was ultimately shut down by the state of Louisiana for child abuse, which is when Khiev returned to his family, at 16. Instead of losing his faith, Khiev describes this period as a turbulent one in terms of his relationship with God; he struggled with issues of connectedness and strife with God. Although Khiev's faith in Jesus Christ was still strong enough that he led two of his friends to come to believe in Christianity after returning to California, the overarching feeling of the time, he described, was one of not feeling that he and God were seeing eye-to-eye.

Marked by his experience at New Bethany, and thrown back into those same circumstances of poverty and violence from which his family had tried to protect him by sending him to school, he admits to making poor choices upon his return. That year, Khiev was arrested in a gang fight and, although just 16, he was tried as an adult for attempted murder. He was found guilty by association and sentenced to a 16-year prison term, where his cycle of pain and struggle continued. In prison, Khiev was introduced to spoken word by a Vietnam War veteran, and this medium soon became a cathartic means for Khiev to shift his perspective on his previous experiences, impacting his and potentially others’ lives in a positive way. In prison, Khiev underwent what he describes as a “spiritual journey,” trying to make sense of his personal experience as well as his relationship to religion. He grew dreadlocks for five years, started a poetry class for at-risk youth, and, as part of this intense period of self-discovery, acquired a self-didactic knowledge of world religions, reading extensively on Islam, Hinduism, Buddhism, and Taoism. Khiev expanded his religious exposure and describes reading about “energy,” both cosmic and scientific, which, he said, finally made sense to him, in terms of fitting the world around him into a “religious system.” Khiev felt and still feels deeply connected to God, although that relationship has changed from his youth. In fact, during Khiev’s final year in prison, he was moved to a brand new prison facility in Arizona, lacking any established programs. Khiev said that some Asian-Americans there had keenly started a Buddhism class, but found its direction was not to their liking. Khiev wrote a proposal and was given leadership of the Buddhism class, and he soon found himself studying, teaching, and facilitating discussions on the religion of his roots, Buddhism. While he was delving into Buddhism, he continued to receive visits from his family, and he describes their conversations then as the time when he articulated and made his beliefs clear that he believed in God and felt that God has always been with him.

i write for California
the golden state where we holding weight
struggling to hold on to faith
cuz they steady packing us in prisons til we're old and grey
"Why I Write," Kosal Khiev

In 2011, upon his release from prison, the United States Government deported him to Cambodia. Although Khiev had never been to Cambodia before, in eight months he created a community of artists and like-minded individuals, found venues for his spoken word, and began teaching creative writing and visual art. He is quickly influencing the city’s burgeoning artistic scene and identity, helping it to develop its own voice. Further, Khiev has become the first artist in residence at Studio Revolt, a “collaborative media lab producing motion imagery and performance projects,” based jointly in Osaka, Chicago, and Phnom Penh. Studio Revolt is filming a series of short films of Khiev's spoken word entitled: Verses in Exile. There is an added element of religious dialogue and an interfaith aspect to Khiev’s work with Studio Revolt, in that co-founder Anida Yoeu Ali, although raised in Chicago, was born in Cambodia, and is a Muslim. Her performance art and spoken word addresses and challenges stereotypes of “Muslim” identities while also looking at their historical persecution. Through this collaboration, Khiev said he has once again broadened his religious horizons and been exposed to the modern expression and influence of another religious worldview.

Thanks in part to his collaboration with Studio Revolt, Khiev's exposure is expanding rapidly in Cambodia. Cambodia is a country in the process of re-inventing, remaking, and rediscovering itself, and Khiev is a part of that. Phnom Penh has the makings of an atmosphere where people are both rediscovering traditions and creating new ones along the way. A large part of this new national identity, aside from the “Nation, Religion, King,” which I have become so accustomed to see day-in and day-out, is the artistic development of this young nation. Development work often tends to focus on one of two things—for which Cambodia is already well known worldwide—historical preservation of sites or post-Khmer Rouge work: the trials and documentation, both of which are very important in order for the country to move forward. I am however, most impressed by work that aims to help Cambodia to face and to discover its present, in order to thrive and to survive. Khiev has given spoken word performances at 2011's TEDx Phnom Penh, Nerd Night, and lectured at the Royal University of Phnom Penh. His current works presented in the Verses in Exile project include the pieces Why I Write and Moments in Between the Nights. Khiev is one of those few who are able to plug in to the collective whirlwind of energy in Phnom Penh currently and create a new future that is truly engaged in “development” work. Through Khiev’s spoken word, he inspires young people to follow their dreams, drawing in part from his own turbulent past and personal relationship with God.


Feel free to direct any questions or comments to Jenny: jennifer.cimaglia@wfdd.us 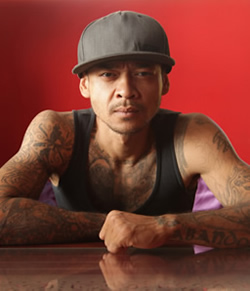