A paper recently released in the journal Science makes use of high-resolution satellite data to provide the most detailed account of global deforestation to date. The picture it paints is a grim one. Over the past 12 years more than 500,000 square miles of forest has been lost worldwide, an area equivalent in size to the state of Alaska. Even more has been degraded or replaced with palm oil or rubber plantations.

Among the countries with the highest national rates of deforestation, three of the top five (Cambodia, Malaysia and Indonesia) are located in Southeast Asia. So it’s no small matter that the region’s forests, in addition to an astonishing diversity of plants and animals, host a community of Buddhist monastics dedicated to their conservation.

Over the past three decades, these ‘ecology monks’ have built a small, but influential movement and the future of Southeast Asia’s forests may just rest in their hands.

Forests have a deep and longstanding association with Buddhism, figuring prominently in the religion’s lore. It was under the Bodhi tree that Siddhartha Gautama achieved enlightenment and in grove of Sal trees where he physically passed. While not ‘sacred’ in the usual sense of the term, many Bodhi trees have become Buddhist pilgrimage sites and the forest remains an important retreat for meditation.

This is probably best seen in the Thai thudong or ‘Forest Monk’ tradition, in which monks wander and sleep in the forest emulating the practice of the Buddha and his early disciples.

It was in Thailand in the mid-20th century where the philosophers Buddhadasa Bhikkhu and P.A. Payutto laid foundation for Buddhist environmental activism. They viewed the growing influence of capitalism in Thailand, with its emphasis on individualism and attainment of material wealth, as standing in stark opposition to central Buddhist tenets of detachment from desire and no-self. Their influential writings reinterpreted core Buddhist teachings and inspired a new generation of ‘engaged Buddhists’ in the region, who saw it as part of the religious duty to engage with society to promote social and environmental justice.

Though there are spirited debates around the question of an inherent ‘environmentalism’ in Buddhist theology, it is easy to draw parallels between the two worlds. Interconnection, the crux of ecology, is a central theme in Buddhism.

Those who argue for the existence of an inherent Buddhist environmental ethic often point to paṭiccasamuppāda or “dependent origination” as a key concept. It states everything comes into being through a complex set of causes and conditions, which, in turn, become the causes and conditions for other phenomena. The world from this perspective is a great web of interdependence, in which human and environmental well-being are inseparable, as is one’s own well-being and the well-being of others.

After a series of floods and landslides ravaged Thailand in the 1980s, killing and displacing thousands, deforestation came under sharp scrutiny. The suffering that resulted from short-sighted economic exploitation gave an increased resonance to the Buddhist environmental narrative. Monks began to utilize direct action to draw attention to their message, inventing new religious traditions in the process. One of these new strategies, tree ordination, has come to symbolize the loosely tethered movement.

The ceremony, in which a tree is wrapped in the monk’s saffron robe and blessed, implies that nature should command the same respect one reserves for monks. In Theravada Buddhist countries where monks are often the most revered figures in society, the act was highly provocative. It angered some and captured the imagination of many others, but whatever their reaction, people were paying attention.

Sermons too have been an important vehicle for the message in local communities, often focused on merit-making, one of the primary aspects of Buddhist practice in Southeast Asia. For most lay Buddhists achieving enlightenment in this lifetime is not a realistic goal. Rather, through merit making they can better their lot in the next life. Many ecology monks have reframed merit-making to promote activities that benefit environment and society.

As we grapple with the increasingly visible effects of climate change, we should not miss the opportunity to build on the innovative strategies of the growing Buddhist environmental movement.

Deforestation accounts for more than one-sixth of greenhouse gas emissions globally. With high carbon density, the forests of Southeast Asia have been a critical focus of programs such as REDD (Reducing Emissions from Deforestation and land Degradation), which is designed to incentivize forest conservation by transferring funds from developed to developing countries for carbon storage and ecosystem services that we all benefit from.

In Cambodia, monks have been instrumental to early REDD successes.

Venerable Bun Saluth was inspired by the Buddhist environmental movement while studying in Thailand. He founded the Monks Community Forest in Oddar Meanchhay Province, which was once the final stronghold of the Khmer Rouge. Cleared of much the physical remnants of war, the province is now home to 13 community forest groups that comprise the nation’s first REDD pilot project.

With equal parts wisdom, charisma and moral authority monks have huge potential to forge consensus and influence action on issues such as deforestation in their own countries. But beyond that, there is potential for the unique philosophy that undergirds their movement to deepen international understandings about our shared responsibility to the environment and to our fellow humans.

Across Southeast Asia ecology monks are forging a middle path in development, one that recognizes both the instrumental and the intrinsic value of nature and balances economic growth with the rights of local communities. We would do well to take note. 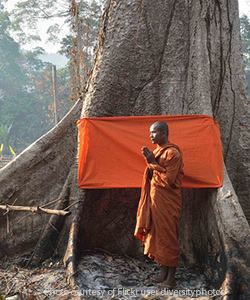