Jan 13 2012
January 13, 2012
This fall, Cambodia was hit by its worst floods in recent history, with over a million people displaced and countless crops ruined. In the aftermath of this natural disaster, the Prime Minister of Cambodia, Hun Sen, cancelled the 2011 Water Festival, one of the most important holidays in Cambodia. The government had decided that it could not afford to spare resources on entertainment, and it seemed hardly fitting to hold a festival amid such a natural disaster. It was in the middle of these floods that women from the Hotel de la Paix Sewing School and PAGE (Program Advancing Girls’ Education), two Buddhist-inspired projects of the Life and Hope Association, collected food donations for hundreds of patients at Siem Reap provincial hospitals who had been displaced by the floods, were ill, and could not return home. The women visited the hospital themselves in order to deliver the parcels: donations which had been solicited and collected by the sewing school and PAGE students. Food emergency packs were distributed to 500 patients across four hospitals, comprised of 15kg of rice, 2 cans of fish, 1kg of sugar, and 1 bottle of soy sauce. I read about this display of empathy and kindness demonstrated by the women from LHA this fall and, knowing that LHA was housed on the grounds of Wat Damnak in Siem Reap, I was eager to learn about the religious values behind their flood relief work.

I arrived at Life and Hope Association (LHA) at Wat Damnak, and was greeted by a smiling Venerable Somnieng, the most charismatic monk with whom I have had the pleasure to speak since arriving in Cambodia. Over the course of our conversation, he displayed an enormous capacity for empathy, telling me that he impresses upon the students to work hard, be kind, and become better citizens. The inspiration for these two LHA-run schools, he explained, was strongly tied to his Buddhist beliefs. Through LHA’s first program, Food for Education – a program that provides food to poor families as an incentive to send their children to school – Venerable Somnieng came into contact with many young women who had never had the opportunity to receive an education or a vocational training. He saw these women and, practicing a long held Buddhist tradition, he imagined his mother in their place—a woman who also lacked education and gave birth to him and his three brothers at a young age. Empathizing with the cycle of poverty illustrated in their lives, Venerable Somnieng realized that these women would have children at a young age and, in turn, those children would become young parents, unable to provide for their children. With the aim of breaking this cycle, he created the Hotel De la Paix Sewing School, and, after presenting the idea to the hotel management, they agreed to fund the project in its entirety. Today, Hotel de la Paix Sewing School teaches sewing skills as well as basic life and work skills to young women from disadvantaged backgrounds. It also provides room and board on the grounds of Wat Damnak for all students, providing a safe and stable environment in which these young women can learn. Upon graduation, students are provided with a sewing machine and starter pack with which to commence their work and a brighter future. PAGE, on the other hand, has a different target. It is a total educational support system: providing room, board, and school supplies for young women who were attending secondary school, but had to stop due to financial circumstances. Although the two programs have distinct structures, targeting different young women, the students of Hotel de Paix and PAGE schools are very close and worked together admirably on the Emergency Flood Relief project.

Having the opportunity to sit down and talk with some of the students from each school, I spoke first with two young women from the Hotel de la Paix Sewing School, Chang Trey, 17 and Khan, 22. Both women told me that they had applied to the sewing school because they had no schooling and saw the sewing school as a means of “catching up,” a way to make up for their missed opportunities. A similar story was told by the young women from PAGE, Sovanna, 19, and Srey Na, 20. They recounted stories of having been forced to quit their secondary schooling due to a lack of money and were referred to Venerable Somnieng. Both were accepted at PAGE and began their studies. The fall floods gravely affected these young women’s families; they received phone calls from home describing flooded rice fields, ruined crops, and ill livestock. They wanted to do as much as possible to help their families but felt that their hands were tied with their commitment to the sewing school and to PAGE, respectively. Feeling like the only way to help their families was in the long-term, they were frustrated that they were unable to send funds to their families.

All four women explained to me that they saw the connection between their families' suffering and that of others in the region, just as Venerable Somnieng saw his mother in them. When they saw how people's animals were dying, roads were underwater, and the rice crop was ruined, the young women were reminded of the difficulties of their early youth and wanted to help out in any way they could. They met with Venerable Somnieng, telling him that they were heartbroken and wanted to share with others the kindness they had received at LHA; helping those affected by the floods was a way to follow the example taught to them by the monks. In their discussion, they suggested providing food to those worst affected by the floods as a means of reducing expenses for flood victims. The idea emerged to collect and procure donations for emergency relief packs, and the students quickly mobilized. The young women handed out flyers in Siem Reap and collected goods for the emergency food relief. Upon delivering their packs to the hospitals, they described a feeling of happiness in spending time with the flood victims. LHA had been generous to its students through the Buddhist principles of compassion and kindness, and now, having internalized those same principles, these young women were thrilled to be able to extend loving kindness to others. Seeing them glow from the generosity they had received as well as given to others, I was impressed by their deep empathy and quest to give back to their communities. As such, Life and Hope Association is a great example of how faith-inspired development can inspire those it aims to help to undertake their own development projects, remaining true to the religious principles imparted to them. 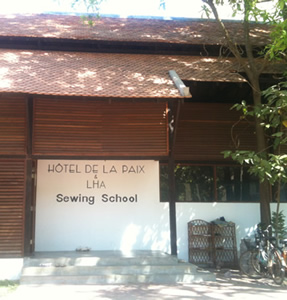