I recently sat down with Set Muhhammadsis, Administrative Officer for the Cambodian Muslim Development Foundation (CMDF) at the office of the Mufti, Cambodiaâs highest Islamic council. The office is located in Russey Keo, a heavily Muslim commune on the northern outskirts of Phnom Penh. We met in the officeâs foyer, surrounded on nearly all sides by shelves slumped under the weight of countless thick leather-bound volumes of religious text. Mr. Set was taking leave of his normal duties to work on the very first translation of the Qurâan into the Khmer language and was kind enough to forgo his lunch to meet with me.

I hadnât come to discuss this process, significant as it is, but rather to discuss Zakat (alms-giving), which functions as the primary system of welfare for the poor and deprived in Islamic communities. I was interested to learn more about how Zakat functions within the Cambodian context and explore its potential to address modern development challenges in the country.

Alms-giving, as an act of religious virtue, is a concept that exists in one form or another in many world religions. In Buddhism, alms in the form of money or food are generally given by laypersons to a monk or nun as a means of earning merit. These daily alms-rounds also represent an important opportunity for interaction between monks and the communities they serve. In many Christian traditions alms or tithes are collected during church services with the passing of the collection plate, as they are during Roman Catholic mass. These voluntary donations often serve to support a churchâs mission and cover its operating budget. However, in no other religious tradition is the act of alms-giving more fundamental or more prescribed than it is in Islam under the system of Zakat.

Indeed, as the fourth pillar of Islam, performing Zakat is one of the most important religious duties in the life of a Muslim. It involves the obligatory donation of a percentage of oneâs wealth to any of eight categories of persons including the poor, the destitute and those in debt. Although no exact percentage is specified in the Koran, the writings of some early Islamic scholars do go into much greater detail on topic. This includes detailing Zakat rates for any particular number of camels, sheep, goats or buffalo an individual may have in their possession. For example, if you have between 5 and 25 camels you can get away with paying a goat for every five camels. Much as in modern taxation systems, the rates are incrementalâ”keep over 25 camels and you find yourself bumped up to the next Zakat bracket, owing a one-year-old female camel. Now camels arenât quite the criterion of wealth that they once were, but there are other stipulations more relevant to modern circumstances. These specify the Zakat rate for gold, silver and other money in bank or in hand at 2.5% of the total value. Most Islamic organizations tasked with the collection of Zakat generally utilize this figure: 2.5% of wealth possessed, calculated for a full lunar year. The minimum Zakat-able income, however, is determined contextually by these local authorities. In Cambodia, for instance, only those making over 2,000 USD a year are required to pay Zakat.

Zakat was utilized in the Islamic world to decrease wealth disparity and increase social solidarity long before the advent of the notion of âdevelopmentâ as we know it today. Indeed, many now believe it only natural to harness this time-honored religious rite to confront modern development challenges, utilizing it as a sustainable source of funding for both humanitarian and development efforts.

This is an argument recently exemplified by Dr. Ahmad Zahid Hamidi of the Malaysian-based International Zakat Organization (IZO). âEvery Muslim should take into consideration the fact that the whole Muslim nation, both individuals and governments, has the responsibility to solve the collective crises of poverty, corruption and inequality suffered by millions of Muslims throughout the Islamic World. The only way to solve these crises is through the duty of Zakat. We will see how a properly implemented system can solve the current economic problems of not just Muslims, but of the whole world.â

The past decade has seen the creation of several such systems and some countries in the region, including Thailand and Malaysia, have already established authorities dedicated to managing Zakat at the national level. Modernizing Zakat, however, poses significant challenges in countries such as Cambodia where Islamic institutions do not yet have adequate capacity or financial infrastructure for such large-scale collection and redistribution. Compounding this are religious and political divisions within Cambodiaâs Muslim community that makes determining which NGO would handle redistribution a contentious matter.

Building institutional capacity may not be the greatest challenge in modernizing Zakat management in Cambodia. There is also the monumental task of convincing the countryâs Muslims, who now pay Zakat directly to individuals in their communities, to instead funnel their payments through the Mufti. Many Zakat contributors are understandably reluctant to surrender the level of personal discretion they now enjoy; resistance to the change resembles in many ways the public welfare vs. private charity debate currently so salient with conservative Christians in America. Establishing trust in the new system will be an uphill battle in a country where corruption and graft are not exactly uncommon practice.

Mr. Set of CMDF recognizes this; âWe need to build the confidence as wellâ¦ Our Mufti here is trying to appeal to each Muslim household and each Muslim village to ask that during Ramadan they pay Zakat to the Mufti.â The hope is that Zakat payments can begin to support some of the Islamic development initiatives already underway, such as the Cambodian Islamic Center (CIC), which is struggling with a lack of funding. âThe Mufti needs some budget to give to the students at the CIC. We have about 600 students at the center, they are orphans but they study under the guidance of the Mufti.â

Despite the many challenges, CMDF is working closely with the Mufti and moving ahead in their attempts to craft a modern Zakat system for Cambodia. Last year CMDF convened a workshop entitled âHow to build a Zakat system by following the Malaysian system.â The system they hope to emulate, Lembaga Zakat Selanger (LZS), was established in 1994 and has employed some progressive tactics for Zakat collection, from direct salary deductions to internet banking transfers. Malaysians can now even opt to pay Zakat on their mobile phone by SMS. Owing in part to these innovative methods LZSâs receipt of Zakat has increased substantially over recent years. In 2009, Zakat revenues totaled over 92 million USD.

It is clear that centralizing Zakat collection at the national and international levels does have the potential to generate a very large funding pool for humanitarian and development initiatives. Humayon Dar, CEO of BNB Islamic, a Sharia financial advisory firm based in London, recently highlighted the potential at the 2009 launch of the World Zakat Fund. He estimates that there are about 400,000 âhigh net worth Muslimsâ (individuals with over 1 million USD in liquidity) in the Middle East and North Africa alone. âIf we have 200,000 high net worth Muslims and get 2.5% of their wealth, we can raise $5 billion and thatâs just from one source.â

With such large sums of money involved in centralized Zakat management, misuse of these funds has already become a worry of some interests in the West. Advocates argue, however, that in addition to bolstering effectiveness, centralization will also result in greater transparency and accountability. This would likely be the case in Cambodia, where a national system of Zakat would be preferable by most to the mosaic of Islamic trans-national NGOs currently funding development programs in these communities. This, of course, wouldnât end the need for external assistance, but as Set Muhhammadsis has suggested, the new system would reduce reliance on these foreign donors in Cambodia. âIf we had a system like this things would be easier and we would have our own funds to help the poor.â

To get in touch with Nathaniel Adams, email nathaniel.adams@wfdd.us 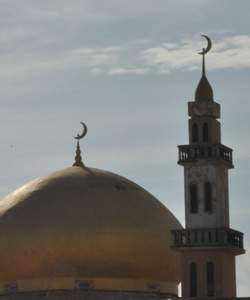