Jun 5 2012
June 5, 2012
Phnom Penh has no shortage of quaint, air-conditioned, Western-style cafes sprinkled throughout the city. Several of these popular eateries were founded and are run by faith-inspired organizations or are the social enterprise arm of a faith-inspired organization. These cafes are perhaps the best and most visible example of a “business as mission” concept in Cambodia. A fairly contemporary term and concept, it stems from the idea that there are other – perhaps more effective – ways to bring faith to people than the traditional missionary model. “Business as mission” believes in the positive transformation of people and communities through for-profit business activities, creating a model that attempts to integrate business goals with a call to the whole church to spread the Gospel. Seen as a response to the line in the Christian tradition’s “Lord’s Prayer,” “Thy kingdom come, Thy will be done on Earth as it is in heaven,” this model is viewed as a step toward creating God’s kingdom on Earth in the here and now. I sat down with the founders or current managers at three such restaurant/social enterprises in Phnom Penh: Daughters of Cambodia, Hagar, and Café Yejj. Each café and organization has a unique history, aesthetic, menu offerings, and social goals; what ties them together are the challenges they face by working in the hospitality industry, as well as the positive impact they create.

I sat down with Lois Cunningham in the Daughters of Cambodia café on street 178. Located on “Artists’ Street,” Daughters of Cambodia is nestled immediately off the Tonle Sap in a tourist-frequented area known for its painters and art galleries. The café is airy and light, and, despite its low-impact opening over a year ago, it has become very popular, having expanded to include a clothing shop and salon. The menu is Western fare, and there always seems to be a flurry of activities, whether in the café or the building’s other rooms, where employees can attend classes. Daughters of Cambodia focuses on providing employment for female sex workers whom they consider to have the ability and desire to leave the sex industry, but whom lack employment opportunities. Cunningham explained that the offer of employment at the café was the missing, necessary element for these women to leave the sex industry. Daughters of Cambodia refers to its staff members as "clients," like any other clients served by an NGO, and they are viewed as staff only in that they do the bulk of the work in the restaurant. The women “clients” are also provided with daycare and medical centers. Daughter of Cambodia sees its business as a “relational” one, where the organization builds relationships with the women working in the restaurant. They believe that God transforms people and designed people to be in relationships with Him and each other. A pastor/director runs the day-to-day business and inspires a great amount of respect from the women through leading by example. He also fulfills the role of a “safe man” in these women’s lives, providing both interpersonal, religious, and work counseling. The atmosphere in the restaurant is one of hard work and joy; the women exude their gratitude for the opportunity to learn new skills and receive training from an organization interested in them and in their development as people.

I met with Rapytha Bonamy at Hagar’s main restaurant on street 306 in Phnom Penh. It is a large, buffet-style, modern Western restaurant, and is one of Hagar’s many projects. Hagar is a Swiss Christian NGO that aims to provide needed life skills training to people, particularly women, in order for them to find employment. (Hagar works across Southeast Asia and also runs the successful JOMA cafes in Vietnam and Laos.) Their cafes – two buffets, one Western, the other Khmer, in Phnom Penh – are thus intended as bridging job opportunities. As these cafes have become increasingly financially successful, the Hagar leadership was conflicted about identifying as an NGO while making such a sizeable profit, and they ultimately decided to change its registration in Cambodia from an NGO to a private business. While Hagar maintains the same management, the private business assets are 20 percent owned by Hagar NGO, with the other 80 percent owned by private investors. Still, there remains a major social enterprise aspect to Hagar’s work, even as a private business: for entry-level positions, Hagar hires beneficiaries from other NGOs as a priority.

However, the cafes themselves are no longer Hagar’s main business activity in Cambodia. The largest bulk activities are now focused in Hagar’s canteens, which Rapytha Bonamy claims have the biggest social impact. This impact is seen particularly in Cambodian garment factories, but Hagar also has such high-profile clients as the US Embassy in Phnom Penh and luxury hotels such as Raffles le Royal and the Intercontinental Hotel. The canteen business refers to the provision of on-site lunches for employees at their place of work; the employer pays for them, and Hagar provides the meals. Persuading the Garment Manufacturers Association of Cambodia (GMAC) of the merit of these canteen meals for their employees remains a big part of Bonamy’s job, although these benefits may seem self-evident to anyone else. Conditions in Cambodian garment factories range from poor to deplorable, achieving infamy as the subject of many documentaries and journalistic articles over the years. In this context, Hagar’s canteens would increase productivity, improve the health of workers, and provide a safe place to spend the lunch break. Bonamy explained that if a garment factory provides lunch for their employees, who are almost all women, the real benefits are actually greater than a salary increase for the garment workers. Most come from the provinces or return to the provinces after work, so salary increases would be a direct increase in the amount of money that workers send back to the countryside. As such, a pay increase does not correspond with a higher quality of living for the garment workers themselves, while a nutritious lunch, which may be the only complete meal the women will eat all day, has enormous benefits. These canteen meals are high in vegetables and protein and include unlimited rice, which accounts for 50 percent of the normal Cambodian caloric intake. The cost of the meal for the garment manufacturers is 2,000 riel, or 50 cents per employee. Hagar is currently working to expand this aspect of its work, convincing GMAC members that canteen meals are a good idea for both themselves and their employees. In focusing on its canteen business, Hagar still maintains a large social focus and impact, while remaining a mostly private company.

Of the three faith-inspired businesses I investigated, Café Yejj springs most directly from the “business as mission” model and heritage. Ten years ago, after arriving in Cambodia as a missionary, Trevor Sworn founded Yejj. Coming from a commerce background, Sworn initially considered several business options, such as opening a bed and breakfast or hotel, but he ultimately decided upon opening a restaurant. Having worked as a sous chef previously, Sworn thought a restaurant seemed like a natural idea. Today, Café Yejj is easily identified by its sunny, bright yellow interior and exterior, becoming somewhat of a Phnom Penh landmark as the first Western café to open in the largely Khmer-Russian Market neighborhood. Sworn hired a consultant to set up the Yejj menu, which focuses on a European or continental style of cuisine, but the restaurant has recently started to add Asian dishes to its menus, chosen and created by its Khmer staff members. Perhaps as a result of Sworn’s background, Yejj also does more direct business advertising than any other Christian social enterprise café in Phnom Penh. Yejj posts advertisements in tourist-heavy publications and locales, such as in-flight magazines, and its ads can also be seen on tuk tuks around Phnom Penh. Yejj understands that its business has to be profitable in order to fund its community activities, and is classified as a Cambodian non-profit organization. The Yejj staff is trained at the Yejj hospitality-training center, in which Yejj invests the major bulk of its restaurant profits. The center has educated over 2,500 students over the past six years, many of whom are immediately employed upon finishing the program at Café Yejj or other area restaurants. As the café has become more self-sufficient, Sworn has stepped away from management in order to focus on a new “business as mission” model: Yejj Consultancy. This new initiative has a social view on the practice of consulting, charging lower fees to NGOs or social enterprises for its consulting work. What started as a modest café now has evolved into several successful “business as mission” ventures for the Yejj group.

While these three businesses have very different stories and distinctive visions, there are some shared lessons and common challenges they have all faced. Working as FIOs in the hospitality industry in Cambodia, a field that demands a great amount of flexibility and understanding, they struggle with walking the fine line between NGO and enterprise management, in addition to common, practical challenges in their daily work. The foremost challenge mentioned by all three cafes is the cultivation of high standards of sanitation and cleanliness in their kitchens. Food and beverage safety is a major issue, and employees accordingly receive hygiene and sanitation educational training. The second major issue, across the board, is the interpersonal skills of the staff. Cunningham mentioned how it was not uncommon to hear of conflicts between Daughters of Cambodia’s “clients,” and in response they instituted internal “emotional intelligence” and “interpersonal skills” training, going so far as to provide mediation and psychological support services for their “clients.” Another common link between Daughters of Cambodia, Hagar, and Yejj is their focus on female employees; they all stress female hires and try to develop women employees in a working environment. Ultimately, all three share the attitude that the combination of work, creativity, risk, and thinking on one’s feet can not only generate new wealth, but also generate new skills for employees. These three organizations create new jobs and also opportunities for their Khmer staff to learn and grow, while a common thread of faith is expressed for the purposes of social change in community and society. 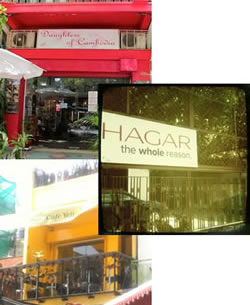