Faith at the UN Commission on the Status of Women

Mar 19 2015
Crystal Corman   March 19, 2015
This year’s Commission on the Status of Women (CSW59) held at the UN in New York focused on progress made toward women’s rights and empowerment in the past 20 years, referring back to the 1995 meeting in Beijing and its resulting declaration and platform for action. As I learned at CSW this past week, women from various faith traditions were present at the 1995 event and continue to be engaged in “gender justice” work today and at CSW59.


One of the most obvious places to find women and men of faith at the CSW is through Ecumenical Women, a coalition of faith-based organizations with offices at the UN. “Grounded in our faith and commitment to global justice”, the organization “trains and empowers an expanding network to advocate for gender equality at the UN.” I attended their orientation the Saturday before CSW59 officially began. Women of different faiths from around the world gathered for worship, fellowship, and practical planning for the weeks ahead. During CSW, these delegates can visit their respective permanent missions at the UN to advocate for gender issues. Several member organizations hosted parallel events or sponsored speakers to attend. Additionally, Ecumenical Women hosts daily morning worship at the Church Center at the UN with different denominations rotating leadership responsibility.

I attended several side events in the UN, as well as NGO-sponsored parallel events, with my eyes and ears open for where religion engages at the CSW. The rooms were filled at most events I attended, but the largest one explicitly noting religion was hosted by France titled “Women Fighting Extremism: In God’s Name?” with nearly 500 in attendance. Framed as a new form of violence against women, the panelists called for more attention to how women and girls suffer under violent extremism. Questions from the floor indicated a diverse audience with both secular and faith voices. I noted a question from a person affiliated with World Vision asking panelists if they had thought about allying with religious leaders in conflict zones.

Scanning through the NGO parallel events, I found several faith-inspired organizations hosting events. I attended events sponsored by the World Council of Churches, Lutheran World Federation, Unitarian Universalists, and YWCA to name a few (it was impossible to attend all as many overlapped or were in distant venues). “Faith” was occasionally explicit in titles, such as “Amplifying the Human Rights Agenda: Voices of Faith Communities in Advancing Sexual and Reproductive Health Rights” and “Sacred and Safe: Building Capacity of Faith Communities to Address Gender-Based Violence.” I also saw posters in hallways, including “Sharia as a Source of Women’s Rights.” As the week went on, I was handed flyers for additional events, some featuring faith actors or themes.

Listening to faith actors or questions during sessions, several topics remain contentious or marginalized. At events focused on sexual and reproductive health rights, some faith actors sought to dominate dialogue by narrowly focusing on abortion. On another panel, speakers spoke about the complexities of intervening to prevent forced marriage across religious and cultural lines. A few faith voices also called for future parallel events at CSW involving LGBTQ persons and concerns.

Faith actors and faith issues are very present at this year’s CSW – and they have been in various ways since Beijing. My experience at this CSW59 was biased as I was embedded in Ecumenical Women, but I looked and also found non-Christian actors engaged and leading. As an American, I also looked for non-North Americans privileged to make the trip to New York to speak for women and girls in their context. This diversity of faith voices has evolved and grown since Beijing 20 years ago, yet the work is not complete. Looking forward to the post-2015 agenda, faith actors joined in the voices of other activists in committing to improve gender indicators in the forthcoming Sustainable Development Goals. 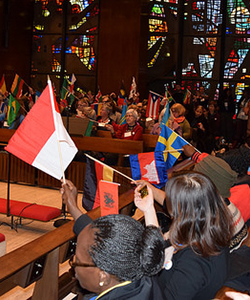