Moving Toward Hope: Observations on Religion and Counter-Human Trafficking in Cambodia

In November 2010, shortly after the annual rice harvest, five labor brokers approached the chief of Por Thi Rong village, inquiring which families would be without off-season work (note: actual locations have been changed to protect individuals’ identities). In the coming months, the brokers arranged for twenty-nine of the villages’ residents to travel toward employment across the Thai-Cambodian border. Among the migrants were infants, children under the age of eight, four 17-year-old boys and a 12-year-old girl. What the families did not realize was that the labor brokers were in fact human traffickers, and that the children would soon find themselves in the begging, labor, and sex industries*. What the human traffickers did not know as they neared the Thai border, where they planned to receive $100 for each person safely delivered, was that they were being followed by undercover investigators from Battambang’s Anti-Human Trafficking Police Unit, working with the help of investigators from South East Asia Investigations into Social and Humanitarian Activities (SISHA).

SISHA is a non-religious NGO, but it operates in a sector driven in large part by faith-inspired groups and individuals. Faith-inspired organizations, for the most part Protestant and evangelical, joined forces with abolitionist** feminists in the late 1990s and early 2000s to institutionalize anti-trafficking and anti-prostitution priorities in the United States. This coalition aligned to lobby for and pass the Trafficking Victims Protection Acts of 2000 (Allan Hertzke’s Freeing God’s Children documents how evangelical groups adopted feminist constructs to their moral and church-based grassroots advocacy in promoting a version of the bill which prioritized sex trafficking over a parallel bill that focused more on bonded labor and sweat shops). The U.S. Department of State’s annual Global Trafficking In Persons (G/TIP) report significantly drives the Cambodian government’s response to anti-trafficking efforts around the framework of prevention, protection and prosecution, while G/TIP priorities continue to determine how funding is allocated to counter-trafficking agencies, both faith-based and non-faith-based. President Bush’s Faith-Based Initiative had a strong impact in Cambodia, creating space for faith-inspired organizations to establish programs that have received continued funding in the first two years of President Obama’s Administration.

One of those recipients of State Department funding, the International Justice Mission (IJM), brought human trafficking into the homes of millions of Americans in 2004 during a Dateline special depicting a high-profile raid in Svay Pak, a brothel town located 11 kilometers outside of Cambodia’s capital and notorious for child prostitution. IJM is a faith-based organization that, like SISHA, works with police to protect vulnerable individuals from commercial sexual exploitation. In the words of SISHA’s Executive Director, Steve Morrish:

"IJM is doing investigative work like we are, but we have a much larger mandate than they do. They focus mainly on the commercial sexual exploitation of children as well as occasionally women. My philosophy is that these crimes, including human trafficking and exploitation, are all connected somewhere along the line to criminality, so we focus on every exploitation crime, including human trafficking, bonded labor, rape, sexual assault, pedophilia, and domestic violence… Another big difference between us and IJM is that we are not religious."

International Justice Mission is by no means acting alone among faith-based anti-trafficking agencies in Cambodia. Following a rescue, in conjunction with the Ministry of Social Affairs, Veterans and Youth Rehabilitation, IJM might place a survivor of trafficking with World Hope International, a Christian relief and development organization which offers emergency aftercare at its Assessment Center, providing mental and physical health assessments as well as family assessments while managing the crucial “hot period” after a raid, during which there may exist serious security concerns. From World Hope International the survivor might spend several months at RAPHA House, an arm of American Rehabilitations Ministry that provides secure shelter, rehabilitation, and vocational training while its social workers ensure that the survivor is safely reintegrated into her community.

The hub of Christian anti-trafficking agencies in Cambodia is Chab Dai (“joining hands” in Khmer), a coalition of Christian non-governmental organizations working against sexual abuse and trafficking in Cambodia. Its director, Helen Sworn, is a leading voice in advocacy to and partnership with the Cambodian government and other anti-trafficking networks within Cambodia and the Greater Mekong Subregion.The NGOs within Chab Dai—there are 49 faith-based member organizations and 30 civil society and international organization partner agencies—work on a broad range of programs, from prevention of trafficking, to raids and rescues, to aftercare for survivors, to reintegration and vocational training; they also vary in the degree to which they incorporate faith into their programming. Chab Dai coordinates its member agencies to ensure an encompassing continuum-of-care for trafficking survivors among faith-based anti-trafficking organizations, while allowing member organizations to stay true to their own spiritual mandate or mission.

That spiritual mandate can at times be problematic, as SISHA’s Morrish explains:

"We have stopped partnering with a few NGOs because of that very fact that they were pushing religion. There is no problem with being religious, whether you are Christian, Muslim, Buddhist, Scientologist or whatever you believe in. If people have belief that can be a positive thing, but there are massive moral issues when you start trying to bring it into other people’s lives that are in need of help. When a person who has been exploited or experienced domestic violence is at their lowest point … you have to be careful about what you suggest to them because they are looking for something."

James Pond, the Director of Transitions Global, which provides aftercare services to sexually trafficked girls at its Transitional Living Center, echoes this point:

"The key advice we got from professionals in the trauma field is that faith should be the last element a person is confronted with. Based on Maslow’s Hierarchy of Needs you have a basic need for safety and security, shelter, food, clothing, and then we move all the way up to altruism at the top of the triangle. We deal with girls who literally have no foundation for safety. We were told that we should take faith off the table, initially, when working with girls dealing with the level of trauma that this population is dealing with. Let the faith that the girls come with, whatever they have, carry them. Find out what that is and tap into that rather than try to influence them from the outside."

My research in Cambodia thus far has explored the role that faith-inspired organizations are playing in the country’s counter-human trafficking efforts, and one point comes up time and time again: there is a shortage of facilities, either secular or faith-based, providing aftercare for trafficking survivors who were not sexually abused, are over the age of 18, or are male. After the 29 villagers from Por Thi Rong were rescued last November, SISHA (in coordination with the Ministry of Social Affairs, Veterans and Youth Rehabilitation) did succeed in placing three of the 17-year-old boys in aftercare facilities. But it was not as easy to place the 12-year-old girl because she had not yet been sexually exploited. As Morrish explains:

"We recently sent a victim to a Christian group which agreed to take the victim initially, but then the next morning they said ‘We don’t want her now, we’ve changed our mind.’ She was trafficked, but she was not yet sexually abused…They were only willing to take her when they thought she had been sexually abused. So what, we are supposed to send her over the border and let her get raped and then we will give her back to you?"

Interviews suggest that these programmatic gaps may be fueled by the relative ease for organizations to secure funding to rescue women and children from sexual exploitation, in no small part driven by donations from international churches. It is here that the coordinating mission of Chab Dai is so important in educating would-be mission groups and donors about the realities on the ground (two major secular anti-trafficking coalitions in Cambodia, COSECAM and ECPAT, both similarly aim to coordinate their member agencies’ programs to avoid service gaps).

Additionally, the gaps in services may exist because so much of the evidence of human trafficking is anecdotal and no reliable statistics exist to measure the true extent of trafficking-in-persons in Cambodia. Victims of sexual exploitation and trafficking are more immediately identifiable than male individuals trafficked into Thailand’s long-range fishing industry, who may also be less willing to self-identify as having been trafficked. This is not the only problem with anecdotal evidence: several organizations have indicated that a single negative experience with a faith-based organization is often enough to put off an NGO from considering partnering with a faith-based organization again. This occurs across faiths, and has been brought up in interviews to explain several secular and Christian organizations’ unwillingness to partner with Buddhist monks in their programs, too.

Regardless of their beliefs, there is one thing everyone can agree on: human trafficking is not a uniquely Cambodian problem. Each year since 2001, the US State Department’s G/TIP report ranks governments around the world, including the US, in their efforts to address trafficking. In the words of James Pond:

"Sex trafficking is not a cultural issue; it’s a global epidemic that has to be addressed in a much broader context. The United States is struggling with it. I gave a lecture to a university in the United States, where a woman stood up and very indignantly asked ‘What motivates a mother in Cambodia to sell her own daughter?’ My response was, ‘The same thing that motivated a mother in Tualitin, Oregon, to sell her daughter: desperate poverty, lack of opportunities, several other siblings, and materialism.’ The mother in Cambodia sells her kid because she has three other kids to feed; the mother in Tualitin, Oregon, sold her daughter so she could get a big screen TV. There are aspects of Cambodian culture that allow human trafficking to happen, but they’re the same cultural issues we struggle with on a global scale."

*Human trafficking is defined in the Palermo Protocol to Prevent, Suppress and Punish Trafficking in Persons, Especially Women and Children as, "[T]he recruitment, transportation, transfer, harbouring or receipt of persons, by means of the threat or use of force or other forms of coercion, of abduction, of fraud, of deception, of the abuse of power or of a position of vulnerability or of the giving or receiving of payments or benefits to achieve the consent of a person having control over another person, for the purpose of exploitation. Exploitation shall include, at a minimum, the exploitation of the prostitution of others or other forms of sexual exploitation, forced labour or services, slavery or practices similar to slavery, servitude or the removal of organs... The consent of a victim of trafficking in persons to the intended exploitation set forth [above] shall be irrelevant where any of the means set forth [above] have been used."

**The term “abolitionist” refers to one who promotes abolition of the sex trade, often based on the belief that prostitution is a form of structural violence against all women. “Abolition” generally stands in contrast to proponents of legalization or decriminalization of prostitution. 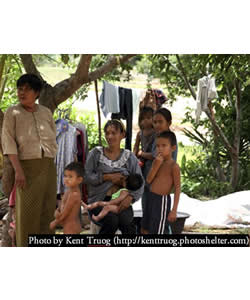