Nourishing Spirit, Nourishing Nation: Feasts for the living and the dead at the Pchum Ben Festival

For many Cambodians, the Pchum Ben Festival is one of the most important spiritual holidays because it is a time for families to reunite, as they return to their places of birth, to offer food and prayers for the spirits of their ancestors. Pchum Ben Festival is particularly important as it focuses on sending prayers to ancestors who have been unable to reincarnate.

Many Cambodians believe that although most living creatures are reincarnated at death, bad karma prevents some souls from entering a new life and traps them instead in the spirit world. During Pchum Ben, “ghosts” are released from the hell realm to roam the earth in search of their relatives. With pchum meaning "gathering together" and benda meaning "offering", the family comes together during this time to offer food and prayers to these wandering ancestors in order to cancel out the bad karma accrued.

On this final day of Pchum Ben, I am staying at my friend’s house in Takeo province, where his family has gathered together to make offerings to these spirits. The chanting that woke me at four in the morning was my friend’s mother-in-law who had risen early to pay respect to the Buddha and pray for her ancestors. The rest of the family was roused just before six-thirty to see her off as she headed to the nearby pagoda. I eagerly accepted her invitation to join.

Monks and the pagoda are pivotal to all fifteen days of ceremonies because they transfer merit to both the living and their ancestors. The fourteen days leading up to Pchum Ben are spent in a state of Kann Ben (kann means "hosting or holding”)—lighting incense and making offerings to the monks who invite the ancestral spirits to join their living relatives to commemorate life. The festival of Pchum Ben is often finally celebrated on the fifteenth day at the pagoda.

However, many historians and religious scholars argue that Pchum Ben is not a Buddhist rite, noting that the tradition is unique to Cambodia. Mr. Narin of the Ministry of Cults and Religions explained in an interview with the Cambodian Daily newspaper that “other countries do not follow such a tradition” because when Buddhism was introduced to Cambodia in the 14th century, this ceremony (of apparent Hindu origins) simply merged with the new belief system. The chief of my friend’s village in Takeo commented that even Cambodians who have converted to Christianity and attend church regularly will go to the pagoda and give offerings to their ancestors. He noted, “It is only the church leaders who do not do this, though everyone knows that this ceremony is important to the Cambodian people.”

Regardless of its origins, my experience with Pchum Ben was strongly associated with the monks and journeying to and from the pagoda.

The scene which greeted us was of excitement and commotion. We quickly grabbed plates, sliced fruit and arranged the ban xeo (Vietnamese pancake) on the plates, and placed the food near the cushions where the monks would sit. We had set aside some of the apple, banana, and sticky rice from the food and added these extras to a large metal bowl of mixed foods. I was told that this bowl was for the hungry ghosts who were not allowed to eat the monks’ food, but who needed to be fed or could cause negative things to happen to the family.

Before the monks entered the hall, we gave monetary donations to the pagoda committee who were already counting the stacks of Khmer riel notes donated by the community. One Achar held a microphone and spoke at a rapid speed similar to a race horse commentator, reading through all the names of those who had donated, thanking them for their generosity.

We then prayed to the Buddha, lit our incense, and said the names of our ancestors and friends who had passed away. The monks then entered the hall and chanted to reinforce the invitation for all deceased to attend and share the food provided by the community. Following the sermon and after the monks had finished eating, the food was distributed to the community. As I looked around the hall of people eating together, I saw that both young and old, wearing traditional and modern clothing, were present to remember their ancestors and accrue positive karma for themselves.

We returned home to find my friend’s wife and sister busy cooking rice. The men were not drinking beer in celebration—as they do during Khmer New Year but instead spoke amongst themselves and helped the children prepare for the midday celebrations at the pagoda. Just before noon we all set out to return to the pagoda to present more food for the monks. We joined a long line of people who filled the alms bowls of the monks with rice and money. This food would be distributed to the poor. After entering the pagoda, we offered more money and food and lit incense for prayers. I sat down to listen to the chanting of the monks and tried to block out the distraction of screaming kids as they re-enacted the wrestling match they had watched on television.

We then moved to my friend’s mother’s house, where the long day of food preparation and offerings continued. But this time, the offering was not to the monks or to the poor, but to the deceased ancestors directly. We prepared food that my friend’s father (who had passed away) particularly enjoyed, such as Angkor Beer. Chanting was then conducted by my friend’s mother, her sister, and the village chief.

My friend informed me that every family will conduct this special ceremony and offer food directly to their relatives because “many believe that it is important to give food to the neak ta, the spirits of those who have died, in order to help them to reincarnate.” The community leader reinforced this by adding that “if you do not feed the neak ta, they can come back to curse you or even kill you.”

The 2012 festival of Pchum Ben took on a new meaning when we arrived back to my friend’s wife’s house and heard the news of the death of King Norodom Sihanouk, who died at the age of 89 in Beijing, China. King Sihanouk was a controversial figure—a much loved, charismatic, father figure throughout decades of instability and violence who served as King and Prime Minister during the 1950s and 1960s. He was credited with the great achievements towards helping to secure independence from the French in 1953, but also associated with public endorsements of the oppressive and violent Khmer Rouge in the 1970s, before he fled Cambodia to escape execution at the end of the regime.

In Phnom Penh, hundreds gathered in front of the Royal Palace to pay their respects to the King, kneeling to pray or simply coming to see what was happening. His body was to be flown in from Beijing the following day. After spending much of his early life studying abroad and later life receiving hospital treatment abroad, his death in China was not so surprising. The passing of the King brings into discussion the relationship between Cambodia and China, as Sihanouk was a key liaison for these two counties. That relationship, and the truth of his role in the rise of the Khmer rouge, is among the many secrets buried with the King.

Many in the village were not saddened by the news of his death, but instead by memories of the pre-Khmer Rouge Cambodia he ruled. As we sat to watch old video footage of Cambodia during the 1960s that was being shown on television, I glanced at the forlorn faces of my friend’s family members as they viewed the events leading to the violent era that would claim the lives of their friends and family. One relative sadly noted, “If we had not had the war, we would be a strong country. Look at the hairstyles and the cars. We were a strong nation until the Khmer Rouge took this from Cambodia.”

Though the death of King Sihanouk and the festival of Pchum Ben brings back these memories, it also reminds the nation of its progress forward, its reincarnation, so to speak. With each step, Cambodia moves towards stability and independence from the international support which envelops the country. With the festival of Pchum Ben and communities coming together, Cambodians hope that good karma can be accrued, as a means to counteract the bad karma of the past. 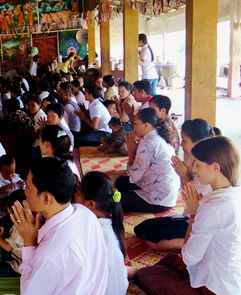