Pagoda at the heart of local debate: economic development or environmental conservation?

Mar 19 2012
March 19, 2012
High up in Bokor National Park in Kampot Province sits a beautiful and freshly painted Buddhist pagoda called Wat Sampeau Moi Roi, also known as Five Boats Wat because of the five boat-shaped rocks nearby. Once a popular leisure destination both for domestic and international tourists – first in the 1920s with French colonial authorities, and then again in the 1960s with affluent Cambodians – Bokor National Park was protected as a conservation site by Royal Decree in 1999. Overlooking the coastal town of Kampot, at 1,079 meters above sea level, Bokor National Park’s evergreen forests are home to a wide variety of rare and threatened animals, including the Indian elephant, leopard, Asiatic black bear, Malayan sun bear, pileated gibbon, pig-tailed macaque, slow Loris, red muntijac deer, lesser mouse deer, and over 300 species of bird. The Cambodian government changed its tune, however, in 2008, when it leased the Park to the Sokimex and Sokha Group, a group of hotel developers, for 99 years. Now, with the Park’s future fated for huge development, Wat Sampeau Moi Roi sits amidst a hive of construction activity of casinos and hotels, as debates continue over whether tourism development is in the interest of the Park and the surrounding community.

Conservationists are represented on both sides of the debate, since many hope that tourism development can provide income both for local communities and for the sustainable management of the Park. Citing the Park’s longstanding focus on tourism development in its Management Plan, as a result of its income generation (DNCP 1999), these hopeful parties argue that tourism reduces the exploitation of natural resources and introduces more incentives for local communities to support conservation. The extent of the redevelopment plan, however, is the main point of contention, as others argue that the Park should remain untouched, in order to protect the variety of threatened animal species that live there.

Wat Sampeau Moi Roi, excluded from consideration throughout these discussions, is home to seven monks, who sit quite literally at the center of this debate. The monks expressed concern about the increasing number of trees that have been cut down, as well as swarms of visitors that will come with the new development plans for the “Bokor Mountain Integrated Development Resort.” Devised by the Sokimex and Sokha Group, these plans include a 12-story resort and casino with 652 rooms, a large Grand Ballroom with the capacity to accommodate up to 2,000 people, and function rooms to cater to smaller groups; entertainment parks; restaurants, bars, and lounges; spas; retail shops; a championship golf course; and several eco-villas. Although the development plan purports to include wild life conservation, an official, operating commitment to environmental protection has yet to be drawn out in full.

Now, with the deadline for the completion of the Bokor Resort already passed, the only display of urgency is in the exponential growth of people living at the Park, and the monks at Wat Sampeau Moi Roi are powerless against this large scale migration . “It will be difficult and will no longer be quiet when this happens,” one monk said, but the reality for them remains: “there is nothing that can be done, we have no plans for when it happens, but it will be hard.” Even in the midst of struggle, however, the pagoda has opened its doors to construction workers and others in need of housing; Wat Sampeau Moi Roi currently houses the largest number of Vietnamese construction workers, as well as four caged and anxious looking monkeys. “We are not happy to put them in cages,” one Buddhist monk tells us. “It is difficult because we released them before, but they caused many problems and made people angry because they ate their fruit. We would be very happy if another NGO would be able to take them away somewhere else.” The four monkeys in the Bokor pagoda struck me as representative of the situation now facing these seven monks. With the rapid expansion of development and growing number of visitors causing grave concerns, the monks feel that the situation is ultimately out of their control. Following a quick phone call by my translator, the four monkeys will soon be rescued by a Cambodian Wildlife NGO and taken to a new location; however, the monks remain troubled and must face the storm which will follow from the increasing developments on this once thriving conservation site. 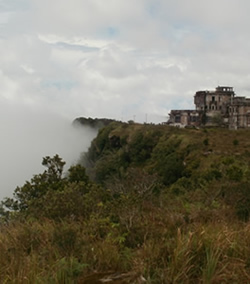