Sep 30 2011
September 30, 2011
Pchum Ben is a two-week Buddhist religious festival during which Cambodians pay their respects to deceased relatives. As the final ceremonies of Phcum Ben draw to a close, it seems a fitting time to reflect on my first few months in Cambodia as a WFDD research fellow. After all, to a certain extent, my work in Cambodia involves studying and thinking about death. My task is to research maternal mortality in Cambodia and the roles that faith inspired actors are taking to reduce it. In studying Cambodia’s progress towards Millennium Development Goal 5, barriers and potential solutions, my research has brought me into contact with doctors, maternal and child health experts, nuns, monks, NGO workers, and youth organizers.


The Pchum Ben ceremonies that I attended highlighted certain aspects of my research and also gave me new insights into the intersection of faith and development in Cambodia on a general level. In the midst of the festival, my colleague and I took a trip to Uodong Mountain, about 45 kilometers outside of Phnom Penh. We were interested in visiting the monastery located there, the Vipassana Dhura Meditation Center. The center consists mainly of Buddhist “nuns” or in Khmer, “donchee.” This is quite rare in Cambodia, as donchee don’t hold an official religious role and are far fewer in number than monks. The Vipassana Dhura Meditation Center houses roughly 200 nuns and attracts many women from Phnom Penh, especially during Pchum Ben. Several of the more prominent donchee of the center frequently visit Phnom Penh where they are involved in various service-oriented activities, ranging from education to health. On the day of our visit, we arrived at Uodong Mountain just in time to receive a blessing from the 60 or so resident monks. Entering the sala, or prayer room, my colleague and I kneeled on the floor with an almost entirely female audience as the monks begin chanting in Pali language. The donchee translated as the ceremony moved into a confession and finally a blessing. The monks, sitting on a raised platform, showered the women seated below with an array of jasmine flowers, lotus petals, and water.

When the blessing had finished, I looked around the sala and was overwhelmed by the fact that the attendees, both monastic and laypeople alike, were all women. The environment created by this all-female space was very comforting and safe. It is the only all-female environment that I have encountered since arriving in Cambodia. I couldn’t help but wonder how many times the women around me had given birth, what their experiences were like, and how many friends and relatives they had lost in childbirth. During a festival dedicated to the dead, it is impossible not to consider such questions. These sentiments, as well as my conversations with the donchee at the mediation center, led me to further reflect on the relationship this location holds to my current research.

Uodong Mountain struck me as an excellent resource for women to come together to discuss a plethora of topics, maternal health included. While there are a few programs in Cambodia that engage donchee in the arena of women’s health, this is still not widely practiced nor as developed as it could be. I thought about the fact that the main reason why donchee have been sought after to such a limited extent by the development community is directly linked to the largest hurdle in addressing maternal mortality: gender inequality. Even at such a female-friendly place as Uodong Mountain, it’s impossible not to note the gender disparity in roles performed by monks and donchee in Cambodian Buddhism. Donchee perform a similar role to that which women in secular society do: they cook, clean, and are the caretakers of the monks. The low status of the donchee and that of the pregnant mother are one and the same. What would the problem of maternal mortality look like if donchee inspired more veneration and respect? Could they become more effective development actors? Or, more importantly, what if women and mothers inspired more veneration and respect? How would this affect the maternal mortality rate?

Thus far, I have studied various positive interventions in maternal health in Cambodia. Proven successful interventions include well-trained midwives, more hospitals and clinics, and access to emergency medical care in closer range to women’s homes. These interventions are useful, but still only accessible to women who can make their own decisions about when, where, and how they give birth. The high rate of maternal mortality in Cambodia is generally indicative of the low value placed on women’s health and the lack of attention it receives. Indirect contributing factors to maternal mortality are domestic violence, a lack of family planning and unsafe abortions. These “indirect” causes ultimately stem from a women’s lack of ownership or control over her own body and an inability to make important decisions. All the positive interventions made by development actors, including faith inspired actors, are not useful if a woman lacks the power to access them. I have come to realize in my two months of research that maternal mortality cannot be addressed without first tackling gender disparity; the former is simply a symptom of the disease of inequality. As the final day of Pchum Ben draws to a close, as everyone remembers the dead, it forces me to contemplate the mothers who lose their lives needlessly each day as a result of gender inequality.

Faith-inspired organizations are often assumed to shy away from addressing gender issues, or as inherently conservative; this is not necessarily the case. I hope that my research on maternal mortality will give me an opportunity to highlight the work being done by faith-inspired organizations in Cambodia to improve gender equality. It is possible that the faith inspired actors doing the most practical work in reducing maternal mortality in Cambodia are those who educate men, who work to decrease domestic violence, and who work on women’s empowerment in every arena from livelihood training to education. There are many ways in which faith-inspired organizations can do this. Buddhist organizations could integrate gender aspects into the 5 precepts of Theravada Buddhism. The precepts already include good sexual conduct and nonviolence, and would be excellent starting points for gender equality programs, potentially led by donchee. The Cambodian Islamic Women’s Development Organization, for example, already runs women’s education programs; these could be expanded to include women’s empowerment and women’s health in their curriculum. I am keen to explore other programs over the course of my year here. As I have come to understand that the issues in and around maternal mortality are much broader and far-reaching than I could have ever imagined, I look forward to the exploration and work ahead. 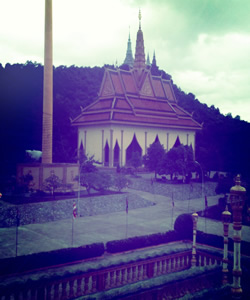