Mar 4 2013
March 4, 2013
I concluded the last Dispatch from Cambodia post with questions of whether reconciliation would follow the death of former King Sihanouk, or if there would be increasing divides amongst the population. King Sihanouk was a significant figurehead in Cambodian history, leading the country to independence, war, and then relative stability. As a result, his death has brought about a mass outpouring of grief, extravagant nationalistic rallies, and numerous Buddhist ceremonies. However, his death also stirs an awakening and awareness to some of Cambodia’s core political and social issues, with some human rights violations criticized by American President Barack Obama during the ASEAN summit last November.

This follow-up blog post set out in search of voices to learn more about the impact of King Sihanouk’s death and the future for Cambodian leadership and unity. I conversed with several individuals over the weekend following the cremation ceremonies and selected a few of those interactions to share here.

My good friend Srey Ra, is a 26 year old volunteer assistant at a conversational English school in Phnom Penh. We met for coffee before I headed to the local pagoda to conduct more interviews, where she described the difficulty of navigating the ceremonies in the city, stressing her determination to pay her personal respects to the former King Sihanouk. She explained that she had tried to visit the body of the King on the grounds where he was lying in state prior to the cremation, but she was unable to enter—first because there were too many people and then because it was closed for lunch. “I thought I would not be able to go and pay my respects, but on the third time I was lucky!” She described the atmosphere surrounding the Royal Palace and National Museum as one of “togetherness.”

Two older women were taking a break from cleaning at the pagoda when I arrived. The women were Kanika, aged 71, and Bopha, aged 67, who had both lived through reign of King Sihanouk and the events which befell the country during this era. Kanika explained, “During King Sihanouk’s time we were very happy, but when we lost him as the king and now that he has died, the people are not so happy. All the ladies who come to help here at the pagoda are sad at the death of the King Sihanouk. He is like a father to us.” She concluded that every day she prays for his safe journey and “will continue to pray for him for a long time to come.” Her friend Bopha reinforced these sentiments, adding that “everybody is sad, but we also accept it as it is a very natural event.”

At the local pagoda, I spoke with Venerable Ly who is one of the 20,000 Buddhist monks who had prayed outside the Royal Palace: “I attended the procession of the King’s Father’s body from the Royal Palace on Friday, and then on Saturday I sat alongside the other 20,000 monks as they paid their respects to the King.” He described his experience with great sadness: “When I sat there in front of the Royal Palace, I cried. I was very upset because he was a great king in Cambodia. I saw the movies about King Sihanouk and I see the good things that he did. He went to the remote area and helped people with farming. He cared about important issues such as poverty and helping others. Now I am worried that others will not.”

Sokha, an 18 year old student at the Royal University of Phnom Penh who was interested in joining our conversation, explained that she didn’t go to the ceremony but instead was at home with her family, huddled around the television set watching the Royal cremation. “My family talked about our Majesty’s history and his funeral. This experience has awakened me up from what I understood about our country’s past and I see his fabulous legacy to his nation and bringing independence.”

The local press and the movie referred to by both Venerable Ly and Sokha about King Sihanouk’s life and legacy neglects to represent the negative impacts of some of the King’s decisions, particularly his role during the rise of the Khmer Rouge and the civil war lasting beyond the 1991 UN Peace Agreements. It was also suggested by a political analyst and academic at the Royal Academy of Cambodia that the documentary has further intentions, explaining that “Prime Minister Hun Sen wants to show the link between the development during today’s regime and the Sihanouk regime.” The positive image and understanding of King Sihanouk’s reign pervades and resonates throughout the nation, with only international observers giving opinions to the contrary.

One international newspaper article about the King’s legacy maintained that following the death of the King, “Buddhism as a moral yardstick will decline in Cambodia.” However, I disagree with this statement. Based on my observations and conversations during the first Cambodian Tngi Sel (Holy day) following the cremation of the former King Sihanouk, Buddhism does not appear to be as threatened as many fear. Flowers and bananas are offered to the Buddha on the morning of the Tngi Sel, as a means of accruing merit in that month, and there was a significant increase in the volume of flower and banana sellers at the local markets across the city and far more congestion around these areas. Sokha reflected that after King Sihanouk’s death, Buddhism in Cambodia will become stronger because after all of the mourning ceremonies people in Cambodia have been increasingly exposed to the traditional rituals necessary for honoring the King and have more knowledge from the various television programs aired on local TV stations. This is certainly reaffirmed by the experience that I had whilst trying to buy my weekly bananas and finding that they had doubled in price.

At the local pagoda, Venerable Ly reinforced that Buddhism continues to stay strong, as many people in Cambodia, both young and old continue to pay their respects at the pagoda and sees this also increasing in the more rural areas of Cambodia: “In my home province of Kratie I see increased interest in Buddhism and now that there have been many ceremonies for the King, people begin to practice and pray.” Kanika concluded that “if people believe in religion, then they can change and become good people.” She maintained that even without the presence of the King, the religion and the people are still together. “I do not think this will change. But I do worry about the future. I worry because I don’t know what will happen or if there will be violence or separation. But I will continue to stay here at the pagoda where I am safe and can learn about religion.”

This undercurrent of worry and fear ran through each of the conversations, with the question of what will happen now that the “Father of Independence” has passed away beginning to rise from the lips of those interviewed. “King Sihanouk tried to help everyone. He was the first person from independence and helped the country. He knew a lot,” explained Bopha, “We are not sure what will happen in the future.” As she rid her mouth of a fire red beetle nut, she added that “it is not only the King that can keep the people together, it is also the government and officials who can do this.” “The death of the King Father can hardly bring hope or reconciliation to Cambodia,” concluded Sokha. “My family and I discussed that he was the one who had been trying to protect his country from other neighboring countries, and supported the creation of public sector jobs. Now he is gone, no one else will continue this instead of him. So I think it will cause more problems to Cambodia.” Venerable Ly was also anxious for the country’s future, stating that the King was able to make the nation as ‘one nation’, but now that he is gone, “I think more people will separate over politics and parties. King Father was able to control these parties and I am now increasingly concerned for the coming election.”

Upon saying goodbye to Venerable Ly and the women at the pagoda, my translator and I step back into the crazy lunchtime traffic. We remain silent, contemplating our thoughts, but I notice that mine cannot help but reflect the buzz of the motorcycles, tuk tuks, and cars—a variety of forces, often colliding together with catastrophic consequences. With the loss of the king as an important symbol of independence, Cambodia must find her own path for reconciliation and rebirth, not forgetting her history, but remaining resilient and prepared for the future which lies in store as this year’s election approaches. 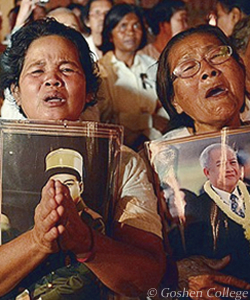