Jan 31 2013
January 31, 2013
Saturday, the 26th of January, marked 100 days since the death of King Norodom Sihanouk last year, resulting in a resurgence of energy to the national mourning. An estimated 20,000 monks from around the country gathered in front of the Royal Palace in Phnom Penh to chant and pray for the soul of the late King Sihanouk.

Clean shaven and arriving in bus loads, the monks took their seats upon the carefully sectioned lawn opposite a giant photo of the king. The 100 days ceremony was led by the Venerable Tep Vong, Great Supreme Patriarch of the nation’s Buddhist monks. Monks had come from pagodas throughout the country to chant and pray in front of the palace. One monk from Phnom Penh explained to me that the numbers of mourners admitted had to be limited because so many monks and lay people wished to come to Phnom Penh to chant and pray: “It is not good if too many monks come together in front of Royal Palace at one time. It might lose control and then there might be a problem. Groups of monks must submit a request to the organizer to be able to come to the big event.”

He explained that there has been a lot of preparation for this event, in particular arranging where the monks will sleep, “There are three places specially prepared for monks to stay: Saramarit Secondary/High School, Wat Bottom Vatey, and Wat Ordnalum.”

The death of the former King Sihanouk has had a major impact on the country. One monk in Kampong Cham province explained how significant the king had been for the Buddhist community: “He was a king who was really concerned about Buddhist Education in Cambodia during 1940 to 1970. There were many Buddhist schools and Institutes established by him. He really was great Buddhist follower and supported Ven. Maha Ghosananda’s peace work in 1992 by awarding him the title of Somdet Phra.” He explained that the monks came to chant and pray in Phnom Penh to be thankful for his help with Buddhism and the education of Buddhism. “As you can see we have Buddhist schools including primary schools, secondary schools, high schools and Universities because of him. I mean he was a really respectful king to Buddhism. So we have to pray for his spirit to go to heaven.” He concluded that this event helps the nation to practice Buddhism and to join together in a spirit of unity; that in the re-development of the country and continuing from the legacy of the king and reconciling the past years of war and unrest, the event helps “to re-develop this country again so that it could be founded on both faith and nationalism.”

With this in my mind, I gaze upon the cremation site in what was formally known as the park outside the National Museum, the Veal Preah Meru Square. Construction of the temporary structure, which includes a central spire surrounded by viewing areas and a wall, is estimated at a total cost of $5 million. However, Prime Minister Hun Sen refuted these claims in a speech made last week when he suggested that the total cost would be closer to $1.2 million. Currently, the funds are being withheld by the government until the quality of construction can be assessed.

This weekend, Phnom Penh will host an estimated 1.5 million people (in the very least) for the four day cremation of King Norodom Sihanouk. Walking around the Royal Palace and riverfront, I noted the return of black pin badges, not traditionally part of Cambodian mourning, being sold by women and their shoeless children. They were also selling posters and all kinds of memorabilia to mark this historic event. The event will also include a deafening five minute artillery fire and 1,000 military guards accompanying the King’s body as it makes its way from the Royal Palace to an extravagant temporary crematorium.

With a few days to go, the anticipation of the event increases and it is evident how swollen the city is already becoming. As the city surges with growing numbers of people, motorbikes, and emotions, the 11,000 military guards begin to pour in to police the crowds and protect a whole host of foreign leaders coming to pay their respects.

Is this rally for the King the reconciliation that Cambodia is yearning for? Does it provide an opportunity for nationalism and unity? Or is it a precursor to an outpouring of emotion and fear, in a country still suffering with deep post-traumatic stress and personal grief for family members and friends? 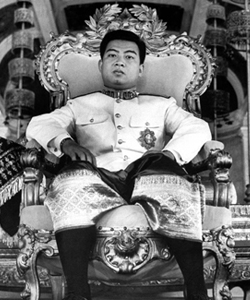