Politics, Pagodas, and Community: A Glance at the Role of Buddhism in the 2012 Elections

Jun 5 2012
June 5, 2012
As the cars, buses, and moto-dops stream across the Cambodian-Japanese Friendship Bridge in Phnom Penh, emptying the city of those hurrying home to cast their vote in the 2012 commune election, Jenny and I return from our recent field visit in Siem Reap.

Siem Reap had been buzzing with election campaigns; an endless circus of loudspeakers and moto-dop processions blocked the narrow roads along the river and circled the grounds of the Angkorian temples. While there, we visited a good friend of ours, a monk whom we met from a previous research trip, who is currently living and serving outside Siem Reap town. After counting our third procession of the ruling Cambodian People’s Party (CPP), with over 300 people in convoy, and the single 24-man parade for the Sam Rainsy opposition party (SRP), we arrived at our destination.

Our friend informed us of the recent disrobing of a young monk in Sort Nikum district in Siem Reap, named Ung Kaing (aged 25), who was disrobed after attending a National Democratic Institute (NDI) meeting along with an activist from the opposition Sam Rainsy Party (SRP). He explained, “Cambodian monks are allowed to listen but are not permitted to join in with activities or parties.” Ung Kaing was a former member of the SRP, and it was alleged that following the NDI meeting he became involved with the SRP campaign taking place outside, which Ung Kaing vehemently denies.

Despite this incident, he comments that more monks will be going to vote this year, since they are encouraged to do so by the leaders of the Cambodian Buddhist Sangha and chief monks in each pagoda.

During the Khmer Rouge between 1975 and 1979, Buddhism was totally suppressed; tens of thousands of monks were murdered, pagodas were destroyed, and Buddhist texts burned. With the swift reintroduction of Buddhism in 1979, Ven. Tep Vong was appointed as the Supreme Patriarch of the Cambodian Buddhist Sangha, with the responsibility of reviving the national religion. Since then, the pagodas have resumed their important, functional role in the community as places of learning and guidance.

In 2008, Cambodian Buddhist monks were given the right to vote in the national elections. This decision was made in light of the 2003 elections when 54,000 Buddhist monks were prohibited from voting, leading to protests which left two monks dead. This retraction came with the understanding from the Supreme Patriarch Tep Vong that the electoral participation of monks is important for democracy.

Buddhist monks hold an extremely influential position in Cambodian society, and the Buddhist Sangha is very much entangled in national politics, as the Supreme Patriarch does not hide his allegiance to the ruling Cambodian People’s Party. This close relationship between Buddhism and politics reaffirms the concerns raised by a number of monks with whom we spoke during our visit to Siem Reap.

Back in Phnom Penh, eagerly awaiting the elections and listening to the onslaught of music from the market nearby, I reflected upon the important and inseparable role of the monk within Cambodian society. A conversation with my young landlady, a devout Buddhist from Prey Veng province, added new insights to my thoughts. She said she was happy to see monks vote because she understands the importance of seeing monks voting alongside their communities. In her province, monks help to monitor and count the votes, in order to ensure that there has been a fair election. As she rushes out the door to drive the two and a half hour trip by moto-dop to join the election, she adds that she pities the monks in her village, since the pagoda is currently halfway through an expensive renovation which began only a few months ago. “If the monks in my village do not vote for CPP,” she explained, “then they will no longer receive financial support for this construction and the pagoda will not be finished. The monks would have to rely on the community to support the money for finishing the job, but the villagers are very poor. They cannot give that much money.” But how, I ask, would they know who the monks are voting for? She answered, “My village is so small; it is not difficult in the rural area to know who is voting for the opposition.”

With these thoughts racing through my mind, I leave my house to follow the growing crowds making their way to cast their votes at the local school and pagoda in the suburban area southwest of the city. The school was teeming with voters organizing themselves, and in the pagoda a similar sight could be seen: peaceful yet buzzing lines of people waiting patiently to enter the marquee to cast their votes.

I notice a group of monks towards the back of the pagoda, and I am invited to sit and talk with them. The group almost doubled as soon as I sat down, and soon there were ten of us sitting under a tree away from the buzz of the voters nearby. Only four from the ten had cast their votes (made identifiable by a stained purple index finger) and the monk closest to me, Phea (aged 30), commented that only 30 percent of monks would be voting. He told me that in Buddhism, the monk can vote or not; it is his choice. Phea explains that this is the first year that he has chosen to cast a vote. He reaffirms the voices of those we spoke with previously, telling us that the monks in the city are more involved than those in rural Cambodia. Phea moved to Phnom Penh from Battambang province, where he was born and became a monk. Explaining the differences in his experiences as a monk in these two areas, he says:

“In Battambang I would never have chosen to vote. The head chief would not encourage monks to do so because the monks in rural Cambodia rely on the community for daily food and support. If the community see the monk voting then they might stop supporting the monk or think badly on them for taking a different opinion. We were afraid to vote. But here in Phnom Penh, it is different. The monks who are here have a better education and are surrounded by the election campaigns and [have] access to information. I see my friends here voting, and it encourages me to also vote. If I have an illness and I don’t go to a doctor, then I won’t get better. It is the same for society. I need to choose the leader who will be the best person to lead the country and resolve the problems that people are facing. The monks who do not vote are too young, but will vote in the 2013 elections to determine the Prime Minister. Others just don’t want to be involved because they don’t want to be seen criticizing someone else or taking sides. That is okay, but now I see that it is good for monks to help. But if I was still in my home in Battambang, I would still be too scared to vote.”

The other monks nod in agreement when this is translated, and I am reminded how wide the urban-rural divide in Cambodia remains. I thank them for their time and wish them luck. Leaving the buzzing crowd behind me, I am left with an overwhelming sense of the hierarchical grip that is deeply ingrained in both religion and community. I await the election results with a greater understanding of the interdependence of the community and pagoda: a separation of the two is inconceivable, and a governmental hold appears to be continuing to grow in both. 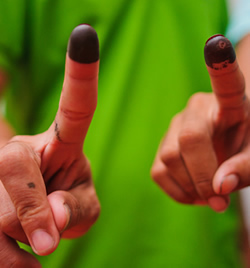