Oct 9 2012
October 9, 2012
As Cambodia becomes increasingly immersed in the globalized world through cooperation with the Association of Southeast Asian Nations (ASEAN), its government ministries have worked to sustain and coordinate Buddhist traditions as a force for solidarity and identity. I witnessed an example of these efforts in August when I attended a training course held by the Ministry of Cults and Religion (MoCR) in Phnom Penh for lay Buddhists priests called "Khmer Achars."

A Khmer Achar is a lay individual, usually over 50 years of age, who leads traditional ceremonies in Cambodia. An Achar either has or has had a family, and thus can provide marriage and parenthood counseling. The Achar is not just an advisor for community members but also integral to the many Buddhist ceremonies and traditional festivals that over 90% of the Cambodian population will undergo from birth to death. As explained by H.E. San Samphoss, head of the Department of Research, Promotion of Buddhism and Connection to Society, “When a baby is born, the Achar and the monk are invited to the naming ceremony and when the baby grows up and they get married, they will need the Achar again. If the person becomes ill, they ask the monk and the Achar to help them to get better.”

Though Achars are present throughout a Buddhist individual’s life and have long been an essential part of Cambodian Buddhist culture, the continuation of their practice was threatened under the Khmer Rouge regime. H.E. San Samphoss noted that under the Khmer Rouge, “many documents were destroyed and knowledge wasn’t passed on.” Because of this destruction, there is little unified information on Achar ceremonial duties and community roles. In response to the rising demand for Achar knowledge, Prime Minister Hun Sen called for comprehensive Achar training sessions and unified training manuals. The MoCR was given the responsibility to implement these initiatives and created the Department of Research, Promotion of Buddhism and Connection to Society, led by H.E. San Samphoss. Since its founding in February 2011, the department has conducted 11 training sessions to instruct an estimated 4,000 Achars. But with an estimated 4,500 pagodas nationwide, each with at least two Achars to train, H.E. San Samphoss notes that there is still a long way to go.

The training session I attended in the middle of August, was a part of this initiative and invited over 300 participants, selected from 500 applicants, to the Ministry of Cults and Religions (MoCR) in Phnom Penh. Achars of varying ages and knowledge levels were brought into one long room for 46 hours of instruction in 29 subjects over eight days. The teachers were specialists in the field of traditional culture, usually from the MoCR, Ministry of Art and Culture, and Ministry of Information; one in particular was a traditional musician from the Royal Palace.

Before this official MoCR training came into existence, the only instruction available was at the community level with older Achars passing on their knowledge to the new ones. However, some elements of the tradition were lost, had changed, or had even been completely distorted through this training process. H.E. San Samphoss explained, “it is good because now everyone can work using the same instructions.”

H.E. San Samphoss also emphasized the need to record this information in the form of printed media: “There are many guide books to support an Achar, explaining all of the tasks during the traditional ceremonies, but it is important to combine all of the different ideas into one comprehensive training manual which can then be published and taught by the MOCR.” The new guide book contains information for reference about all aspects of the traditional wedding ceremonies, from cutting the hair and flowers to identifying songs and chants for the monks.

A video is also being produced that will instruct Achars on how to conduct a wedding ceremony. The MoCR boasted that it can be broadcasted on TV through Cambodia and even overseas, so that more people can learn about Cambodian culture and tradition. The MoCR continues to expand their use of media to provide other realms of instruction for Achars, emphasizing that “the video and the book to take back to the province are only meant to be guidelines. For example, there is a document about traditional music to use for specific ceremonies, but it still allows flexibility. It just helps to remove any conflicts or uncertainty in the Achar’s work.”

I noticed that there were a few women also in attendance at this training. H.E. San Samphoss informed me that there has been a steady increase of female participants each year since they were invited to join the first training session in 2010. There are now 14 women who participate and this is quite a step forward for Cambodia, where even female nuns are generally not ordained. H.E San Samphoss emphasized that “we provide equal rights for men and women. They conduct the same ceremonies as the male Achars.” There are now plans to conduct similar training for Cambodian Buddhist nuns, who are usually only responsible for daily pagoda tasks like cleaning and cooking, and therefore do not have time to learn and practice the Dhamma.

After hearing about these expansions, I asked H.E. San Samphoss if the ministry had considered taking the trainings to each province instead of inviting participants to come to Phnom Penh. This would allow them to reach more people and make the training more effective than bringing participants into one long room. H.E. San Samphoss replied that this was not currently possible without the ministry’s permission and would need extra funding in order to expand out into the provinces: “We lack funds and good equipment for training. Many Achars from the province want to join the training, but there is no space for them all.”

More funding and efforts to bring Achar training out into the provinces would be beneficial for Cambodia’s cultural and religious development; but does the growing focus on preserving Buddhist traditions sometimes isolate other religious contingents, like the Cham and indigenous groups? Are there similar efforts by the government to keep these traditions alive? Additionally, does the growing focus on preserving these traditions damper the progressive and organic development of Cambodian Buddhism, or serve to strengthen a heritage that was badly damaged through years of repression?

Putting these questions aside, I saw that the training was welcomed warmly by participants and others who I have spoken to about this initiative. The lay Buddhist Achar is the important link between the monk and the community and by strengthening this role, there is the hope that knowledge of Cambodian Buddhism will continue to flourish countrywide and provide clear guidelines and confidence to those leading the ceremonies and the lay Buddhist community alike. With the loss, destruction, and misinterpretation of traditions and documentation during the years of upheaval and suffering under the Khmer Rouge, the Ministry of Cult and Religions is making a seemingly well-intentioned effort to guide the reincarnation of traditional Buddhist knowledge in Cambodia. 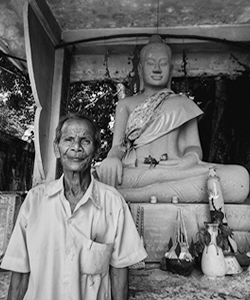