Along the banks of the Tonle Sap river, at the northern end of Phnom Penh, sits a temple unlike most you will encounter around the capital. Its distinctive and ornate bowed roof distinguishes itself from the more common Cambodian Buddhist temples and hints at its East Asian provenance. I had long been intrigued by this mysterious structure and after a year exploring countless Theravada Buddhist pagodas, I thought it was about time to learn more about this little temple, the religion practiced within and the community that it serves. This past week we were able to organize a visit and learned that the complex housed not only a venerable religious tradition, but also a very unique community development organization.

It was late afternoon as we arrived at the temple and it was immediately clear that this was a day of some significance. The whole place seemed to buzz with activity. In the the central courtyard a number of young girls in full marching band regalia milled about among carefully decorated tables. It took some enquiring around, but we soon learned that we were at Yie Xian Gong temple, which serves members of Phnom Penh’s Chinese-Cambodian (Khmer-Chen) community who practice Chinese Folk Religion, a diverse and syncretic faith that blends elements of Buddhism, Taoism and Confucianism with more ancient folk traditions. With nearly 500 million adherents, Chinese Folk Religion is one of the world’s largest faith traditions. As we stepped into the main temple building with its ornate wooden carvings and murals in timeworn hues, we quickly found ourselves transported to the heart of this unique spiritual realm. The designs and colors that surrounded us were not only beautiful, but also hold deep symbolic qualities within Chinese cosmology. We watched as visitors clutching a handful of smoldering incense sticks made their way to the temple’s far wall and bowed several times, hands raised above their heads. This was meant as an offering to the temple’s deities, made in hopes that they will bless the offerer with continued luck and prosperity. Chinese Folk Religion involves the veneration of an array of deities and this was clearly demonstrated by the many honored figures, which filled the hall. There are typically three main shrines in Chinese temples, but there can be several smaller ones found in various nooks throughout. With hundreds of local gods, goddesses and demigods it is unlikely that any two temples will feature an identical assortment. In many cases, legendary and historical figures who were well known for a certain virtue will be elevated to the status of shen (spirit god). The central shrine at Yie Xian Gong holds a carved wooden figure barely visible under the many layers of colorful robes and elaborate headdress. We were told that this was an ancient general renowned for his bravery on the battlefield.

We must have looked sufficiently out of place as we stood admiring the general because we had soon attracted the attention of an older man who approached us with a quizzical look. After a brief explanation of our intentions (luckily enough his daughter was around to translate), he invited us to sit down and was more than happy to tell us a bit about the history of the temple and shed light on the day’s events. He told us that he served as the director of a school that was part of the larger complex there. As we learned, the school currently provides supplementary education in the Chinese language, but it hoped to expand to English and other subjects in the future. That day happened to be a graduation celebration for those who had completed the program. The school, which was forced to close during the Khmer Rouge period, was also commemorating the twelve-year anniversary of its reopening.

Though the Khmer Rouge period was a tremendously significant event in its history, both the school and the temple have a storied past that stretches long before this tragedy. As was proudly boasted by the growing crowd around us, the temple was founded long before the French ever set foot in the country. Indeed, the history of Chinese settlement in Cambodia goes back at least to the 15th century. These early immigrants were primarily Hokkien from what is now Fujian province. In that era Chinese immigrants had important commercial roles as traders, shopkeepers and moneylenders. By the 1960’s the Chinese were the largest ethnic minority in the country with an estimated population of nearly half a million. The Khmer Rouge period was disastrous for Cambodia’s ethnic Chinese. As most were well-educated, urban merchants, they were especially persecuted. Chinese temples and schools such as Yie Xian Gong were closed or destroyed and the Chinese language banned, even in private settings. Many Khmer-Chen met their end in the killing fields or died from overwork; those that were lucky managed to flee abroad. By 1984 there were only about 60,000 Chinese-Cambodians left in the country. Conditions for Khmer-Chen communities have slowly improved in the years since, particularly as China’s role in the Cambodian economy has grown. Khmer-Chen have reestablished businesses building on international connections, and many have prospered.

As we talked further with the group we were very surprised to learn that the temple itself may have played a role in the success of Cambodia’s ethnically Chinese communities, both past and present. Much as the Buddhist pagoda has historically served as a community meeting place for many Cambodians, so too has the Chinese temple for the Khmer-Chen. This role of the temple took on particular significance in many overseas Chinese communities as a result of their social isolation. Several centuries ago, a unique institution evolved that was intended to function as a community support mechanism based on principles of cooperation and mutual assistance among Chinese immigrants. These institutions are known as Kongsi, or clan halls. Kongsi are benevolent associations generally founded by clans with the same surname and they have been used throughout the Chinese diaspora to overcome discrimination and economic difficulty. It is often suggested that the Kongsi concept has been instrumental to the thriving of many overseas Chinese communities. Yie Xian Gong temple has long been home to the Hok Kien Association, which serves the Hokkien community and is one of the oldest Kongsi in Cambodia. Many of the association’s members have found success in business and their donations help provide support to those members of the community that find themselves in need. This might involve providing food and other supplies to families who have fallen on hard times, or subsiding education for families that cannot afford it. There are five Kongsi active in Cambodia as we were told, each serving a different sub-set of the Khmer-Chen community. While there are only five Kongsi present in Cambodia there are many more around the world, some of which have evolved into multi-national companies. In Indonesia some Kongsi have even developed into political units. Most, however, maintain their original function providing community support.

As we left Yie Xian Gong temple, the student band had begun warming up and the event’s guests were streaming in the front gate. Many of them will head to the temple’s shrine, make an offering to the general, and ask for good luck and success in their endeavors; however, they will do so knowing that they will have the added support of their Kongsi should they need it. 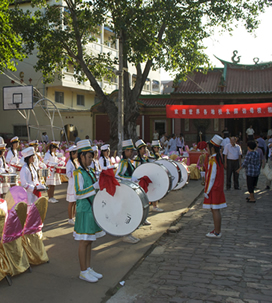