The Cao Dai in Phnom Penh: A Unique and Surprising Expression of Faith and Development

Nov 1 2011
November 1, 2011
While conducting research on the intersection and relationship between religion and development in Cambodia, I am always pleasantly surprised when my ideas are challenged and expanded of what forms religion and development take here. Even the process of finding the physical locations of organizations that we wish to interview is occasionally a surprise and challenge as well. This is exactly what happened on a recent visit to one of Phnom Penh's Cao Dai temples.

Nat and I had heard from several sources that there was one active Cao Dai temple in Phnom Penh and that it was located somewhere on Mao Tse Dung Boulevard. No one, however, seemed to know in which neighborhood to start looking for the temple, and the idea of locating an exact street address of the Cao Dai temple was completely moot. Despite numerous drives up and down Mao Tse Dung Boulevard, this Cao Dai temples remained elusive to us. Until one day, while walking down the road, Nat noticed the “divine eye” of Cao Dai peeking out at him from down an alleyway. We quickly arranged for a research assistant to come with us to the temple to translate and went traipsing down the little alley to investigate. We discovered that this “lone” Cao Dai temple was actually one of two Cao Dai temples, with the other located just around the corner. Upon arriving at the first temple, we were directed to the second temple in order to find someone who would be willing to speak with us, and once at the second temple, we found some Caodaists who were happy to explain to us both their religion and their “development” work. We learned that the ultimate goal of Cao Dai is for individuals to find peace and, by extension, to create worldwide harmony. At its core, Cao Dai seeks to find a way to unite all the major world religions; its ultimate message is that all religions are one and the same, and so it seeks to create a truly universal world religion. Cao Dai draws from the teachings of Confucianism, Taoism, Buddhism, and Roman Catholicism and includes a diverse array of saints, such as Sun Yat-Sen, Shakespeare, Muhammad, Pericles, Julius Caesar, Joan of Arc, and Victor Hugo. In this sense, Cao Dai is almost like an interfaith organization within itself.

During the course of this conversation, we learned that there are currently three active Cao Dai temples in Cambodia. Two are located in Phnom Penh, and one is located near the border with Vietnam. Across these three temples, there is an estimated active membership of 400-500 Cao Dai adherents in Cambodia currently. Prior to the Khmer Rouge period, there were eight active Cao Dai temples in Cambodia, but few Cao Dai temples remained afterwards, as a result of the Khmer Rouge's efforts to rid Cambodia of foreign influences, namely Cambodians of ethnic Chinese and Vietnamese origin. During that time, many Cao Dai adherents either fled Cambodia or were most likely executed. The Caodaists were targeted because their religion is and has been historically based in Vietnam; Cao Dai was founded by Ngo Van Chieu in 1925 in Tay Ninh, Vietnam, where he worked for the French administration and underwent a spiritual experience, during which he believed he encountered the divine being, the Cao Dai. Today, almost all of the Cao Dai adherents in Cambodia are of Vietnamese origin. The Cao Dai religion has managed to retain a high level of Vietnamese character: although the Phnom Penh Caodaists speak Khmer or were born in and raised in Cambodia, they still self-identify as Vietnamese. Even our research assistant was very astonished by the strength of their Vietnamese identity, mentioning to us several times after the interview how strange it was to meet people of Vietnamese origin in Phnom Penh who openly and even proudly proclaim their Vietnamese identity. There is some resentment and mistrust between Cambodians and their Vietnamese neighbors, and this usually prevents the ethnic Vietnamese in Cambodia from openly identifying as such, or even admitting that they speak Vietnamese. That the Caodaists self-identify as Vietnamese is, I think, mostly due to their primary identification with the Cao Dai religious community, from which they draw a large amount of strength and support. Their identity first with their religious beliefs, and second with their ethnicity, gives them the comfort and strength to openly state that they are Vietnamese. Within this strong and close-knit community - a marginal group even among other religious minorities in Cambodia - there is no worry of alienation as a result of their ethnic heritage.

This small religious community in Phnom Penh represents one of the most striking examples I have studied of the overlap and influence of religious and ethnic identities. Cao Dai still has a very strong geographical base in southern Vietnam; Tay Ninh continues to function as the epicenter of the worldwide Cao Dai community. The Caodaists we interviewed said that they traveled to Tay Ninh multiple times during the year. We were invited to accompany the Phnom Penh Caodaists the next time they return to Tay Ninh, which lent us the impression that the trips to Tay Ninh are extremely frequent and that the Phnom Penh Caodaists keep a very close link with the community in Tay Ninh. The two temples in Phnom Penh function almost as Vietnamese community centers. They are both fairly large, several-story houses, with gardens, playground, vehicles, and kitchens. Split between the two Cao Dai “wats” are 30 staff and clergy, most of whom live on site at one of the two temples; the permanent staff and clergy includes a chief, vice-chiefs, cooks, driver, etc. The organization of spiritual activities in the two temples, as well as the monks, nuns, anchar, and lay people who live there, mirror the mini-state organizational structure of the Holy See in Tay Ninh. There are also various branches within the Cao Dai hierarchy specializing in legislative, executive, and judicial matters, comprised of popes, cardinals, priests, and bishops. They maintain a frequent and intensive schedule of prayer, four times and day, 30 minutes each session; prayers are held at the Cao Dai temples at 6 AM, noon, 6 PM, and midnight. As such, the Cao Dai temple is perpetually busy and buzzing, with people on the Cao Dai temple grounds practically all the time, and a lot of traffic back and forth between the neighboring temples. It seemed that through the duration of our interview, there were preparations continually underway for the next prayer session or meal at the temple.

If there are comings and goings between the two temples almost all the time, what then makes one different from the other? We were told that one temple is a “mother temple” and the other a “father temple." This gendering of the temples does not indicate a difference in who can live or worship at the two locations; that is, the temples are not segregated by gender, even if one is “male” and the other is “female.” There are simply a different set of prayers and the worship of different deities that occur in each temple; in both locations, men and women pray together, but they follow different prayer scripts. At the “mother temple” prayers are addressed to the Goddess, a kind of female Buddha figure, referred to as the Holy Mother, or the mother of all the things in the universe. Partly as a result of this goddess worship, women hold a relatively more powerful role in Cao Dai than in Buddhism. Women can be ordained as priests and can preside over religious ceremonies, but may not hold the two highest positions in the Cao Dai hierarchy, those of Cardinal and Pope. Gender equality is also an important tenet of Cao Dai as it comprises part of the effort to create peace and harmony in the universe. Thus, women do have a relatively higher level of prestige, but this relative power in the community has yet to manifest itself in female clergy taking a more active role in development work, as I had hypothesized could occur in the Buddhist community in my last blog post.

Even if the female clergy has yet to take an especially active role in development work in the Cao Dai community, there is still some very interesting development work being undertaken by the two temples here in Phnom Penh. Nat and I had initially been drawn to Cao Dai because we had been told that the adherents provided free burial services to anyone—whether they were Cao Dai or not. We considered this a fairly unique example of faith-inspired development work, which addresses an extremely specific need, and we were looking forward to exploring the free burial service further. The Cao Dai members we interviewed showed us the car in which they drive around Phnom Penh and the surrounding countryside, collecting any dead bodies they find and interring them. This “death-mobile” was bright blue with white curtains, with dragons protruding from it and, of course, the divine eye of Cao Dai. We had hypothesized that the importance attributed to burials and funerals, and their dedication to free burial services, could be the result of a Cao Dai injunction against cremation. However, in our interview, we were told that this was not the case. Caodaists simply believe it is important for everyone to have a proper burial or funeral, for the purpose of aiding the dead to pass more easily or quickly onto their next life, or to find repose in between the round of rebirths. The Caodaists believe that providing burials also contributes to the overall level of peace and harmony worldwide. Although quite unusual, we found this provision of community services to be a critical, albeit surprising, development activity, especially when one considers the importance of proper burial for families and for the process of mourning. Burials, funerals, and cremations are expensive, and when dead bodies are not properly removed or disposed of, they create a public health hazard. Seen from this perspective, the work of the Cao Dai community in Phnom Penh incorporates aspects of charity, religion, and public health in its work. Our experience and conversations at the Phnom Penh “mother” Cao Dai temple not only challenged our ideas of “religion” and “faith” in Cambodia—but also challenged our idea of what working in development can mean. Reconsidering all these issues as our interview drew to a close, I looked up at the “divine eye” of Cao Dai watching us and I couldn't help but wonder how many people it had carried to their final resting place and how many more people would see their way to a burial in that car. 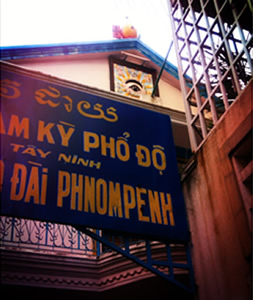