The Dhammayietra: Patience, compassion, understanding, and a border conflict (Part 1)


Dong…Dong…Dong…The pagoda gong chimes through the pitch black of this humid, early Monday morning. It is 4:30 AM, and I am pleased to have been woken up an hour later than the expected 3:30 wake-up call, which was what we had been promised the night before. Although prepared, I am bleary eyed and disoriented. Laura and I roll out of bed, while Srey Mao, our translator, decides to stay in bed. Laura and I both know that she will come seek us out later, snapping pictures and telling us the day’s instructions. We stumble around, find the key to the bathroom, brush our teeth, and arrive in the Sala Chan (normally the eating hall) before 90 percent of the monks have even stirred from their beds. There is no rush to get to the hall, no rush to start chanting, and no set hours. The strict monastic discipline of the Vinaya code that I had been expecting was not only lacking, but also far more fluid than I could have ever guessed. Eventually, the two dozen monks, mostly young and many of them novices, as well as a handful of laypeople, made their way to the hall, settled in, and began chanting and meditating.

Why were Laura and I awake at 4:30 AM? Why were we spending the night sleeping on a monastery floor? My colleague and I had come to Oddar Meanchey, a province in the very northwestern tip of Cambodia, in order to participate in the 22nd Dhammayietra peace walk, virtually the oldest institution of engaged Buddhism in Cambodia.

The Dhammayietra began in 1992, during the time that refugees in the Thai border camps were repatriating back into Cambodia. That inaugural walk was launched in response to the suffering of the Cambodian people, as an effort to spread the Buddhist principle of great compassion, bringing home its founder, Venerable Preah Maha Ghosananda, who had been in exile during the war. Each year since then, monks and laypeople have walked across Cambodia in the spring, in order to convey a message of peace.

Thus, for two day and nights, beginning on March 12, 2012 at Wat Prasat Racha, in Samrong Town, Laura, Mao, and I joined the Dhammayietra, while the monks continued onwards for four more days, until the 18th. They would end at Wat Kiri Mongkol O’Smach, also in Oddar Meanchey province, at the border between Cambodia and Thailand for the second consecutive time. Border provinces were chosen for the 2011 and 2012 peace walks because of the escalating tensions and violence at the contested border, in order to broadcast and highlight both Thailand and Cambodia’s desire for peace and harmony. Thus, the Dhammayietra serves as a peace walk to counterbalance nationalistic tendencies.

Still at the pagoda, after morning chanting and meditation were finished, the organizer of this year’s Dhammayietra, Oddom Vann Sivorn, gave a dharma talk, a mixture of Buddhist teachings and practical advice for the 25 monks, saying:

“Make sure to cover your heads with your robes in order to protect you from the afternoon heat. Eat breakfast and lunch and rest afterwards. Tie your robes well this morning so that you won’t have to retie them throughout the day. If other monks ask to join the walk, allow them to. If someone asks you what the Dhammayietra is, do not reply, ‘I don’t know.’ Do not accept monetary donations from laypeople along the route; instruct them to give the donation to their local wat.”

With the instructions finished, we were off, with six kilometers to walk until our next pagoda stop—and breakfast—as the candies we had been given after chanting would provide enough energy to take us only so far. Laura and I were both impressed and surprised by what we witnessed over the first few hours of the walk. The monks we walked with were received extremely warmly in the villages and schools they passed throughout this tough border region: dry and full of men with protective tattoos to guard them from bullets during the long years of civil war. Families, children, the young, the old, and even soldiers came rushing out of their houses, kneeling at the roadside to receive a water blessing (tuk mon) from the young monks. Those along our route who heard about the Dhammayietra's approach were well prepared with ample donations and the entire family ready at the roadside for their blessing. Others scrambled for any donation they could lay their hands on, gathering food, water, and other items. The donations from laypeople were so many that a truck, which collected and stored gifts, followed the entire Dhammayietra procession. As the monks blessed person after person, Srey Mao explained to me that the water blessing is one of the first things a Khmai monk learns. When asked why this was so, she explained the importance of the monks’ immediate ability to give back to the communities which support them entirely. Otherwise, a monk who does not know how to give a blessing is seen as essentially taking advantage of the Sangha around him.

Around 10 AM, we arrived at Wat Bos Sbouy. Everyone was hot, dusty, and tired. The monks lined up to receive their breakfast, which consisted of that morning’s donations picked up along the route. The monks finally fed, the nuns and laypeople, who had been waiting patiently for their turn, settled onto the floor of the prayer hall and helped themselves to their breakfasts. Everyone was feeling a bit lethargic after the meal, which soon gave way to post-breakfast confusion over the proper route for the next six kilometers. As the sun climbed higher in the sky and the heat increased, post-breakfast confusion soon turned into post-lunch confusion. Laura, Srey Mao, and I decided to hang up our hammocks while waiting for an undetermined amount of time and promptly fell asleep in the afternoon heat. Several hours later, the organizers had decided upon the route with renewed vigor and awakened us, setting off five hours later than scheduled. At this point in the afternoon, the Dhammayietra had no longer become an academic exercise for me or a test of my physical limits, but rather a much bigger lesson in patience and waiting.

Back on the road again, we passed our first school on the Dhammayietra’s route. This is one of the main goals of the peace walk: not only to hand out information and pamphlets in the villages, but also to stop at schools and give lessons on Buddhist principles, hygiene, environmental conservation, and morality. Everywhere we went, the monks distributed leaflets about the five precepts and sanitation. As the procession of monks passed by the elementary school, we were greeted by yet another surprise: hundreds of smiling children rushed up to the gates of the school, in order to present donations and gifts of food to the Dhammayietra monks. The effect was overwhelming. Three monks broke away from the march to stop and teach at the school, and Laura, Srey Mao, and I followed to see for ourselves what these lessons were and how they would be both taught and received. When the monks entered the schoolyard, I watched in awe as the hundreds of children lined up neatly in rows, kneeled, and fell silent, waiting for the lesson. The amount of respect and authority the monks commanded from the students was astounding; I had never seen anything like it before. Over the next hour as the lesson was taught, they remained seated, obedient, quiet, and attentive. The lesson outlined and explained the five Buddhist precepts, which are as follows:

The five precepts were somewhat updated and adjusted for the young audience. Precept 2 was explained in terms of what one should do if one finds something that does not belong to them on a classroom floor. Precept 4 was explained in terms of how one speaks to one’s parents and teachers. The lesson finished with an environmental message about the planting of trees, handing out of learning materials, chanting, and, finally, blessings over the students. When all was over, the young students filled the donation truck with bags of cooked rice, candies, and packages of instant noodles. The teacher-monks, Laura, Srey Mao, a few other volunteers, and I climbed into the truck and nestled ourselves unsteadily onto the piles of papers and instant noodles, and the truck lumbered off to our final destination for the day.

After a short but bumpy ride through backroads, we arrived at a big, beautiful wat overlooking a lotus pond. It was peaceful, serene, and pretty—everything one could ask for after a hot and demanding day’s walk. Our relaxation and regrouping was interrupted within a few minutes of arriving, however, when the pagoda began to broadcast a radio announcement complete with loud, musical accompaniment. Announcing the arrival of the Dhammayietra and its itinerary for the next day, the radio show was loud enough to be heard across the surrounding villages and countryside. Its deafening volume rattling in our heads, Mao, Laura, and I set off in search of a quieter place to sleep. We found the quarters of the young novice monks, set back from the main temple complex, and were granted permission to sleep on their porch. Soon enough, my hammock was up, and Laura and Mao were protected, lying on a mat under a mosquito net. Once we had rested, our last problem to solve for the day was for the three girls to figure out how we would bathe with a dozen underage monks lounging about. The bucket shower was squarely placed on the front of the porch, in plain view of, well, everyone, but fortunately the evening’s chanting soon started and created an opportunity and diversion for Laura, Srey Mao, and I to take our bucket baths in the open night air. We quickly bathed and were back in “bed” again before the young novice monks returned. As I lay in my hammock, I dozed to the sounds of monks listening to music on their cell phones, chatting, smoking cigarettes, playing, and generally rustling around the dark porch. It was only 8:30 PM, but I was determined to get some sleep as I knew the next day would bring with it another 4:30 AM start.

Thus ended March 12th, day one of the 2012 Dhammayietra Peace Walk. As I woke up several times during the night to the barking of dogs, the hum of a generator, the chirping of a gecko, I felt safe, happy, and protected… at least until I thought about getting up again at 4:30...dong…dong…dong...

For more information on joining in or donating to the Dhammayietra, contact Oddam Vann Sivorn at: syvornoddom@yahoo.com. 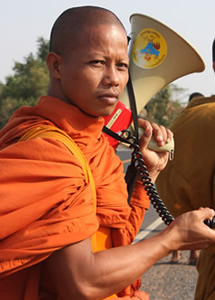