The Dhammayietra: Sharing stories of hardship and hope (Part 2)

Mar 30 2012
March 30, 2012
After circling the pagoda once, the bright orange train of monks embarked on the first six kilometers of the 2012 Dhammayietra peace walk, leaving Wat Prasat Racha in Sam Rong Town, Oddar Meanchey Province, for the Cambodian-Thailand border town of O’Smach. This was the twentieth anniversary of the 135-kilometer journey, as Dhammayietra volunteers have followed in the footsteps of Venerable Preah Maha Ghosananda since 1992, when he first responded to the people’s suffering in Cambodia by bringing the message of peace and the act of compassion to the countryside.

My colleague Jenny, our translator Srey Mao, and I followed behind the monks, excited to be part of this unique experience, with the opportunity to listen to the stories and testimonies of those walking with us and those that we would meet along the way.

The first opportunity arose as we walked alongside the only other foreign volunteers at the rear of the train, Volkmar Ensslin from Germany and another volunteer from Thailand. Volkmar is the managing director of Kikam, an interfaith, German-based NGO that helps children in Cambodia through cooperation with local, professional and inter-religious organizations. Registered in Germany for administration and taxation reasons, the organization supports training, education, and accommodation for impoverished, orphaned, or abused children and promotes the sponsorship of Cambodian children and prevention of drug addiction, child trade, and child prostitution. Volkmar sees the Dhammayietra as a way to work towards a few of the organization’s fundamental objectives, namely, “stabilization of peace” and “establishment of a sustainable society for Cambodia children.” Consequently, each year Kikam provides the funding for the printing of resources for the walk, including leaflets, posters, and books.

Donations for the Dhammayietra have decreased significantly over the past few years, owing mainly to the world economic crisis and other relief causes that divert funds, but this year donations have been exceptionally small, largely due to the widespread perception that the walk represents a political movement. These concerns have led to fewer participants as well. “This is the shortest and smallest Dhammayietra that they have ever had,” Volkmar told us, “The concern has been that [the walk] might be stopped by authorities.” Despite publicizing the event as a walk for peace, not politics, he said, “it was difficult to convince volunteers to join.”

Before I was able to process Volkmar’s insights fully, I observed three nuns walking ahead of us, each completely different in both appearance and mannerism. The oldest of the three (aged 60) had a closely shaved head, traditional white robes, and a strong pinched expression. She walked with an air of elegance and understanding, as though with each step there was great thought and intention. The middle-aged nun (aged 43) had her hair in a loose black bun and brightly colored underwear showing underneath her dusty white robe. Her speech was loud and direct, with a playful personality and endless confidence. The third nun, Vanda, (aged 26) from Banteay Meanchey, struggled along the dusty road with a clubbed left foot. As the other two quickly outpaced her, I caught up to Vanda.

Soon after I initiated conversation with her, I realized that Vanda most likely chose nunhood at such a young age because of her foot, which makes it difficult for her to work on her family’s farm, as well as a mental illness. Despite struggling with conversation, Vanda explained that this Dhammayietra was her third, exuding a thirst for life and learning, and unexpectedly bursting into Thai at moments! We walked together, holding hands to keep her upright at times, until we were so far behind that the truck collecting the offerings pulled up alongside us. Vanda climbed in, not disheartened, but allowing herself to rest until the following morning when she would walk again.

Once I caught up with the rest of the group, we enjoyed a short respite before continuing to the second pagoda for a lethargic lunch, followed by an educational lesson at a local school. We soon returned to reality upon arrival at the Wat Goan Kriell in Khtum Village. The large pagoda is desolate with few signs of monastic day-to-day life. According to a committee member of the pagoda we spoke with, it was not always like this. He explained to us that he became a committee member in 2009, after a development company seized all five hectares of his land the year prior. In total, the company claimed 200,000 hectares in order to grow cassava, a crop infamous for its devastating impact on soil quality. The company employs workers from other provinces, in order to pay a lower wage, antagonizing the local community that would be earning a lot more if they still had their own land. Knowing the danger it faces with growing hostilities, the company has sought the protection of the police, who guard the area. “I am not allowed to go near my land,” he said.

Consequently, an increasing number of the local community have migrated to Thailand for work and return only for ceremonies or special occasions, making the manageable 20-kilometer trip between Khtum village and the Thai border. He estimated that only five percent of the population returns to live in Cambodia permanently again, saying, “[The work in Thailand] is irregular, but not as hard work as it is in Cambodia.” This has severely impacted this once-thriving pagoda, where 30 monks lived at one point. “There were many monks because the villagers used to come and give food and pray, but now it is hard for the monks to get food because the villagers do not come,” the committee member explained, “They have no time because they must go to Thailand to find work and spend money to go.” Pointing to a pile of scaffolding and rubble, the remains of a now-abandoned construction project for a new home for the monks, he explained sadly, “We had to stop. We had no money and there were no more monks.”

These brightly robed monks were the focus of my second day on the Dhammayietra, beginning at 4:30 the next morning. My first glimpse was offered in conversation with the slow-paced and warm spirited Venerable Sun Peng (28) from Baneay Srey in Siem Reap. The oldest of six, Sun Peng told me that it was important for his family that he became a monk, and from the ages of 12 to 21, he lived the monastic life. He explains, “I wanted to become a monk because of the training and education it provides and also because of the important ceremonial function that monks play in the community.” Once he had finished his novice training, however, he left the monkhood and studied art with the support of UNESCO Norway, and later lived as an artist in Siem Reap for a few years. Sun Peng continued to be involved in environmental awareness and conservation, providing voluntary support to an NGO working to protect the wildlife in Phnom Kabal Spean, in Banteay Srey. Nine years later, he returned; “I went back after nine years,” Sun Peng explained, “because I felt ready to continue my training at a higher level.”

Now, in his first year as a volunteer on the Dhammayietra, Sun Peng explains his motivation in joining the peace walk: “It is very important to see the reality of how people live, and I like the opportunity to teach about environment and health to the communities.” He recalled a time that the area had many forests, and noting the deforestation that taken place, he said, “It is difficult without the forest. It is hotter and there is pollution, but we can help on the Dhammayietra by planting and encouraging communities to plant trees.” In this way, the Dhammayietra is a way to spread hope throughout the region.

Another hope for the future is embodied in the novice monks, who were invited to volunteer for the first time this year, owing to the decline in participants. The four novice monks walked together on the first day, but by the second, three decided to help collect offerings on the truck. Soppana (14), from Wat Prasat Racha in Sam Rong Town in Oddar Meanchey, showed his determination, as the only one who did not want to sit on the truck and chose to walk with the older monks instead. One of five sons in a farming family in Siem Reap, he was the only one in his family to choose the monkhood as well and plans to continue until he completes his novice training at the age of 22. Although he does not know what he will do afterwards, he stated with excitement, “I have many ideas for my future.”

As the second day soon came to an end, our journey with the Dhammayietra was over. Each one of the inspiring individuals we had the privilege to walk alongside has their own distinctive and significant story. The small, but influential, walking train did not stop with us; it continued its journey winding north towards O’Svay and the border to Thailand, stopping to bless those looking for peace and compassion along the way. 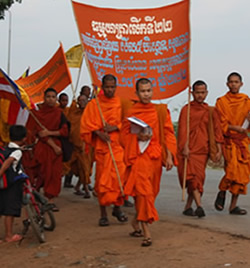