Up to the TASK: Addressing the Changing Nature of HIV's Impact in Phnom Penh's Mean Chey District

Nov 15 2010
November 15, 2010
Crossing the Bassac River from downtown Phnom Penh, the Mean Chey slum was in plain sight. The housing looked dilapidated and the river was encroaching, as there had been heavy rains upstream. Inside the slum, however, the view is of three walls: one of corrugated sheet metal, one of plywood, and one made of wire. We are sitting on mats in the living room; the bedroom is on the other side of a cardboard wall. "I don't have a fourth wall," says the host. "We use our neighbor's." On the wire wall hang packages of peanuts, other snack foods and small goods, all part of a fledgling microenterprise.

I am visiting this home with Mr. David Crooks, Tearfund's Country Representative, and Mr. Pich Sovann, a Project Manager for Trotrung Ning Apivaet Sokapheap Neak Krey Kror (which translates roughly to "Supporting the Health and Development of the Poor"), or TASK. Tearfund, an international Christian relief and development organization which has worked in Cambodia since the early 1980s, currently partners with seven faith-based organizations including TASK, a Christian-inspired Cambodian NGO. David and Pich have allowed me to join them and a TASK social worker in visiting three families affected by HIV, including this couple, clients of TASK's AIDS Home Care program.

The husband looks weak. Through Pich's translation, he tells David and me how difficult it is for him to earn an income. He has lived with HIV for five years, and there are few people who will hire him. He does his best to find manual labor jobs, but there are many days where he simply does not have the strength to work. His neighbors know he has HIV and, while they sometimes treat him differently, he is relieved that they no longer avoid him.

Our conversation is briefly interrupted by a neighbor who stops in to buy a package of rice crackers, handing the house's matriarch 200 riels, which she puts in a tin can by her feet. Though she, too, has HIV, her health is much better than her husband's, and she is running this small shop from their home. Seeing the transaction, I wonder: how much money can she possibly make per day? So I ask, and am taken aback by her response: she earns an average of two cents profit each day.

When TASK's Executive Director Mr. Prom Pauv (pictured above) says he wants to work with the poorest of the poor, he means it. A former medical worker, Pauv has been in Cambodia for 16 years, primarily working in community economic development and capacity building in the Mean Chey district of Phnom Penh. Like the myriad development challenges facing Cambodia, TASK's participatory approach to development work is in continual transition. Each of its project managers conducts regular program evaluations, planning actions on the basis of clients' recommendations. Speaking with me earlier in the day, Pauv attributed this approach to Tearfund's guidance, saying, "TASK is constantly changing to respond to new community needs and challenges. In that regard we have learned a lot from Tearfund. In over 15 years of service we have tried to develop a community development and counterpart approach to our work."

Nowhere in TASK's programming is this clearer than its AIDS Home Care and HALO (Hope Assistance and Love for Orphans) programs. HALO provides money to vulnerable single parents and, when necessary, arranges alternative foster care so that children are not forced into orphanages. Pauv recognizes the inherent connection between TASK's AIDS Home Care and HALO programs:


"[HALO clients] are children and teenagers, many of whom have been orphaned once or twice because of HIV. It was truly a pandemic, with its peak around 2003, so there are still a number of children in the program. Our program has changed considerably since 2000, before we were localized [in 2004]. Back then, our AIDS Home Care program was essentially palliative care. People prepared to die. So we had the AIDS Home Care program for parents and HALO for their children, which allowed us to put them in foster care and do follow up support with volunteer social workers."

While there is no nationwide data for the number of children orphaned by HIV/AIDS, children between the ages of 0-17 affected by HIV (including those with the disease and those whose parents either have the disease or died of it), are particularly vulnerable. Orphans and children affected by HIV are much less likely to access education than children unaffected by the disease with both parents alive, and they face heightened food insecurity and lower household income levels (see UNICEF HIV/AIDS Basic Indicator and The National Multi-sectoral Orphans and Vulnerable Children Task Force).

The course of the HIV/AIDS pandemic has undergone a dramatic shift in the past decade. Cambodia has seen a nationwide decrease in the rate of HIV-positive adults aged 15-49, from approximately 2% in 1998 to approximately 0.8% in 2008 and a projected 0.7% today, earning the Cambodian National Government a Millennium Development Goal Award for its efforts to combat the disease. With these improvements comes hope, and a change in TASK's approach. Pauv states: "Since ARVs [anti-retroviral drugs] have become so much more accessible, our AIDS program provides livelihood support and vocational training. Instead of preparing people to die, we are preparing them to go back to what they used to be before they contracted the virus."

From the slums of Mean Chey we travel to visit two more families affected by HIV. The first family, headed by an HIV-positive woman whose husband died of the disease several years before, is a client of both the AIDS Home Care and HALO programs. She cares for five children including her eldest son, who leaves the house each morning at 6:00 to attend school. He wants to be a doctor. We then visit another HALO partner family: three girls aged 21, 20, and 14, living on their own. These girls' parents had been AIDS Home Care clients. Their father made sure to link them into HALO before his death. The two older daughters are nearing completion of their degrees in finance and accounting, and as we finished speaking with them, they resumed the English lesson for their younger sister which we had interrupted. Clearly, HALO project managers have been successful in communicating the importance of education, a central tenet of TASK's mission. TASK partners with the Urban Resource Centre and Ministry of Health to provide identification cards for vulnerable families to access free health care, and even this effort is education-focused; in Pauv's words, "HALO families and our impoverished clients can now go to any hospital where URC partners, so it frees up a lot of money for education."

TASK measures success by more than its financial return on investment, enabling it to serve the poorest of the poor. Yet it is also committed to promoting systematic change, and strives to make sure that its clients transition out of its programs. Beginning this year, the AIDS Home Care program will discharge several families. To ensure the sustainability of its work, TASK plans to refer many more families from the program to a local microfinance institution (MFI). Among Mean Chey district's poorest families, those affected by HIV/AIDS would generally not make ideal clients for MFIs. Health complications may cause consistent absences from work, and many make so little income that it is difficult to serve them in an economically efficient manner. Yet HIV-aware MFIs have demonstrated their ability to work at the community level in enhancing social support mechanisms and serving HIV-prevalent communities (see Microfinance, the Labour Market and Social Inclusion: A Tale of Three Cities, USAID's Microfinance and HIV/AIDS NOTE 1, and The Foundation for Development Cooperation). TASK's greatest strength seems to be this partnership approach to community development and its ability to connect vulnerable people to appropriate government or social services.

TASK's partnership approach to working with government stands in stark contrast to traditional, confrontational advocacy. TASK has demonstrated its ability to adjust to the changing trajectory of HIV/AIDS in Cambodia, although emerging government policies have the potential to either support or set back earlier successes. This is most apparent with regard to Cambodia's 2008 Law on Suppression of Human Trafficking and Sexual Exploitation. Pauv is concerned that the law may set back current prevention efforts on the frontline of the fight against HIV/AIDS by pushing brothels underground or disincentivizing condom use. He says, "The same activity is still going on in secret... [I]f you go to a karaoke bar you can still find prostitutes, but you will not find condoms there because then the police would have cause to say, 'This is a brothel.'" Pauv is not alone in this criticism.

As we cross back over the Bassac River, I have returned with a deeper understanding of the changing nature of HIV's effect on families in Mean Chey. As we reach downtown Phnom Penh, I am surprised to learn that all three of the families we visited are Buddhist. Discussing this with Pauv, he comments: "A commune leader once said to me: 'You are Christian, so you must only serve Christians.' I tell everyone that we are Christians but that we serve all. If you don't believe it, come see for yourself." 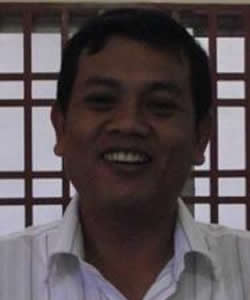