Dec 2 2014
Lauren Herzog   December 2, 2014
A group of Senegalese religious leaders, accompanied by a representative of the Senegalese Ministry of Health and Social Action, visited Morocco from November 16-21, 2014. The visit’s purpose was to exchange information about family health and family planning programs, and especially the involvement of religious leaders in designing, communicating about, and executing these programs. The members of the Senegalese delegation are part of a Working Group which is committed to active engagement in support of the national family planning program within the leading religious communities.

The meetings in Morocco with leaders who have worked on family planning allowed the Working Group members to better appreciate the roles religious leaders have played and are playing in Morocco’s family planning efforts and, in particular, how far family planning is accepted in Moroccan society. Many conversations focused on the themes of women’s rights, youth education, Islam’s views on family planning, and the importance of interreligious work in their efforts.

Before the visit, most members of the Working Group favored family planning for Senegal, albeit with some questions and reservations. Meetings in Morocco served to reinforce their belief that family planning is acceptable within their religious context and that it offers important benefits for their communities. A few members were not initially entirely persuaded that Islam permits family planning; the meetings succeeded in convincing them that it does. A skeptical Working Group member remarked on the profound social changes that Morocco and Senegal were experiencing. Morocco, this member suggested, seemed more developed and productive in light of substantial poverty reduction and lower birth rates; this member saw these changes as a result in part of Morocco’s family planning program.

Recommendations focused on the importance of working with discretion and sensitivity in Senegal. Some members argued that women should be more actively involved in religious discussions and promotion of family planning. All agreed that it would be beneficial to widen the scope of the work from family planning to well-being of the family or reproductive health. Working Group members agreed that the Moroccan evidence should suffice to convince Muslims in Senegal that Islamic teachings do indeed permit family planning and can have numerous benefits for their communities. The visit allowed them to draw important lessons on how to strengthen their efforts and better engage their communities, and they look forward to applying the lessons learned in Morocco to their communities in Senegal.

The visit was organized by the World Faiths Development Dialogue (WFDD), an independent organization based at Georgetown University in Washington, D.C that works at the intersection of religion and development. It is part of a program, supported by the Hewlett Foundation, to engage Senegalese religious leaders in efforts to improve maternal and child health within their local communities. A Groupe de travail, or Working Group, was created in the summer of 2014, composed of Senegalese religious leaders and a representative of the Ministry of Health and Social Action. The Working Group’s members have committed themselves to promoting more active communication about family planning within Senegal’s religious communities. A priority Working Group objective is to explore experiences of collaboration between government, civil society, and religious actors on family planning initiatives in other Muslim-majority countries.

The Rabita Mohammadia des Oulémas has been particularly active in the promotion of family planning for six years; this institution works to engage religious leaders and communities on the issue. The Rabita has conducted recent studies on what religious leaders need in order to promote family planning efforts. In conjunction with UNFPA and UNAIDS, the Rabita has published guides on the position of Islam on numerous health and social issues, such as HIV/AIDS, family planning, gender-based violence, and women’s rights.

Aicha Haddou presented a recent conference that the Rabita organized on women in religion. She stated that some have interpreted Islam to the detriment of women, which has drawn wide criticism to the religion. The recent conference brought together women from monotheistic religions to discuss women’s rights. In addition to their religions, the women also examined the role of culture and tradition in treatment of women.

The meeting also featured a discussion on the need to incorporate reflection alongside rote memorization in religious education. Interpretation of text is crucial to the treatment of vulnerable populations, such as women and religious minorities in the Muslim world. A central theme that emerged was that religion promotes the well-being of all people, and supports the preservation of life: “La préservation du corps avant la préservation de la religion.” [“Preservation of the body before preservation of religion.”]

In the meeting, UNFPA Morocco asserted that arguing in favor of family planning is a rather outdated topic in Morocco; religious communities have long since come to accept and even encourage family planning. With that obstacle overcome, UNFPA Morocco’s biggest challenge today is to promote the use of long-term contraceptive methods over short-term methods. The organization also works to integrate youth into the program because they are often overlooked in family planning. Although the national family planning program serves only married couples, Morocco has seen social shifts, such as delayed marriage, that point to the importance of targeting youth in programming. UNFPA estimates that there is now an average of 14 years between a Moroccan’s first sexual encounter and marriage.

Although the social realities in Senegal differ from those in Morocco, the members of the Working Group all observed that they have had the same difficulties in integrating youth into family planning efforts, whether as religious leaders or as part of the Ministry of Health and Social Action. Religious leaders, in particular, are faced with the dilemma of how to respond to the needs of the population without compromising religious beliefs. Additionally, the word “sex” is very shocking in Senegalese society. The religious leaders discussed the need to review the framing of family planning in Senegal; the use of language that is different from medical terminology could help them reach a broader set of segments of the population.

Morocco’s Direction de la Population frames the issue of family planning as a long-term investment for improving quality of life, protecting maternal and child health, reducing rates of maternal and infant mortality, and fighting poverty. Given the success of the national program, the focus is now more on the protection of women and children than on population concerns. The program’s objective is not to require everyone to use contraceptive methods, but rather to give Moroccans the information necessary to understand their reproductive health options and make the best decisions for them.

After the program began in 1965, Morocco’s ulamas quickly understood the benefits of family planning, and they now use the same language as the Ministry of Health when discussing this issue. The national program serves only married couples, but health professionals can provide information to youth on reproductive health. The Working Group members were engaged throughout the presentation and requested further details about the role of religious leaders in the family planning program.

The Muslim religious leaders agreed that Islam is a religion that seeks to find solutions, particularly in the context of the well-being of the family. A member of the Working Group observed, “Nous avons accepté de souffrir mais nous n’acceptons pas que les enfants souffrent ; il faut les protéger.” [“We have accepted suffering, but we will not accept that children suffer; we must protect them.”] The goal of family planning is not to limit births, but rather to organize the family, promote women’s rights, and reduce poverty. Even today, many Senegalese are unsure whether or not Islam permits family planning. As members of the Working Group, they have been sensitized and are prepared to discuss the issue in their communities. Although many actors have previously worked on family planning and religion in Senegal with little success, they are optimistic that their country could become a model for other countries.

Despite the optimism and engagement of the members, they raised a few concerns. They noted that it is difficult to work on a sensitive issue such as family planning because the term itself creates fear in Senegal. It would be preferable to make the language broader and more encompassing. Focusing solely on family planning could cause them to miss larger issues in reproductive health and family well-being.

An ulama involved with the Rabita spoke with the group regarding the views of Islam on marriage and reproduction. He discussed the importance of marriage in Islam, as well as the dangers of early marriage and sexual relations outside of marriage. He spoke at length about the need to educate youth on sexual and reproductive health and parents’ responsibility to foster a dialogue with their children on these topics. Members of the Working Group had extensive exchanges with him about interpretations of the Qur’an and women’s roles in society.

L’Association Marocaine de Planification Familiale has been instrumental in the promotion of family planning for decades in Morocco. When the organization was founded, reproductive health and family planning were still considered taboo topics; today, they are universally accepted in Morocco. The organization’s approach is to take religion into account alongside health and science—partnerships between doctors and religious leaders are critical. By 2020, AMPF plans to triple its sexual health services, and obtain widespread recognition for sexual and reproductive health as human rights.

Although many organizations in Morocco focus solely on family planning within married couples, AMPF discussed the gap that exists for providing services to youth. This gap originates from the exclusion of youth in family planning strategies given the taboos around educating youth about sex and sexual health. The Working Group engaged with AMPF staff in discussions about how to create dialogues with youth on these topics. Members of the Working Group noted that demographic growth is a serious issue to be addressed in Senegal, and there needs to be an expansion of sexual and reproductive health education.

Visit Debrief
The members of the Working Group agreed that the exchange visit to Morocco was a success; they were particularly satisfied with the content of the meetings and the materials that they received. Although they had worked together on numerous occasions in Senegal, this was the first time that they have been able to spend time together, build relationships, and understand each other’s motivations. As a result of this visit, they concluded that the group dynamics have changed and there is an excellent culture of trust within the group.

A Working Group member remarked that WFDD may have been the last actor to begin working on family planning in Senegal, but it has made important strides in the short period of time. Following the visit to Morocco that WFDD organized, the Working Group members feel obligated and prepared to continue their work in Senegal. They say that action needs to be taken at the community level; developing argumentaires tailored to the realities of Senegal will aid in this work. They feel that this trip was only the first stage of their work; although this is a difficult project, they are reenergized by the visit to Morocco. 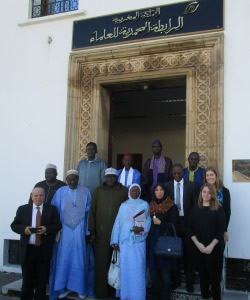