For many people and faith institutions, the welfare of mothers and children amounts to a sacred duty. It is also enshrined in the year 2000 Millennium Development Goals. One effort to translate these goals into reality was reflected in the launch at Georgetown University of a movement and partnership called A Promise Renewed. Leading partners in this effort are UNICEF, USAID, Religions for Peace, and CIFA (Center for Interfaith Action on Global Poverty). The promise to future generations has been formulated in straightforward terms as Ten Promises to Our Children.
This document reflects the efforts of CIFA and WFDD to set out both what the promises mean specifically, and how faith communities are acting and could act to further the global effort. It extends the actions that were initially framed for children to mothers also. The promises are technically rigorous, but they are also understandable and, we hope, inspirational. The document grew from a sense that tangible evidence could support a much broader effort in carrying goals into reality.
PDF 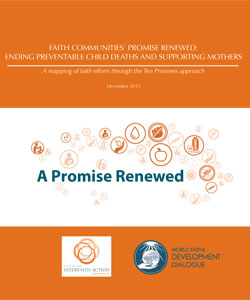