On the Ground in Senegal: The Influences of Religion on the Practice of Family Planning

Since 2014, Senegal’s Cadre des Religieux pour la Santé et le Développement (CRSD), supported by WFDD, has promoted family planning consistent with religious teachings. The starting hypothesis was the idea that religious leaders and communities influence (both positively and negatively) decisions around family planning and should be involved in preparatory phases and in implementation. This poster draws on the qualitative data collected during the midline evaluation in March 2017 to highlight religious influences on family planning, decisions by couples, and the counsel of religious leaders. It was presented at the annual Ouagadougou Partnership conference in Conakry, Guinea in December 2017 by WFDD Executive Director Katherine Marshall and CRSD President Sheikh Saliou Mbacké. 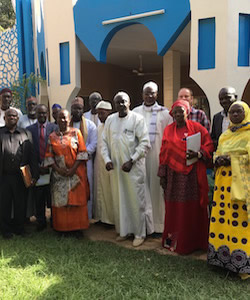