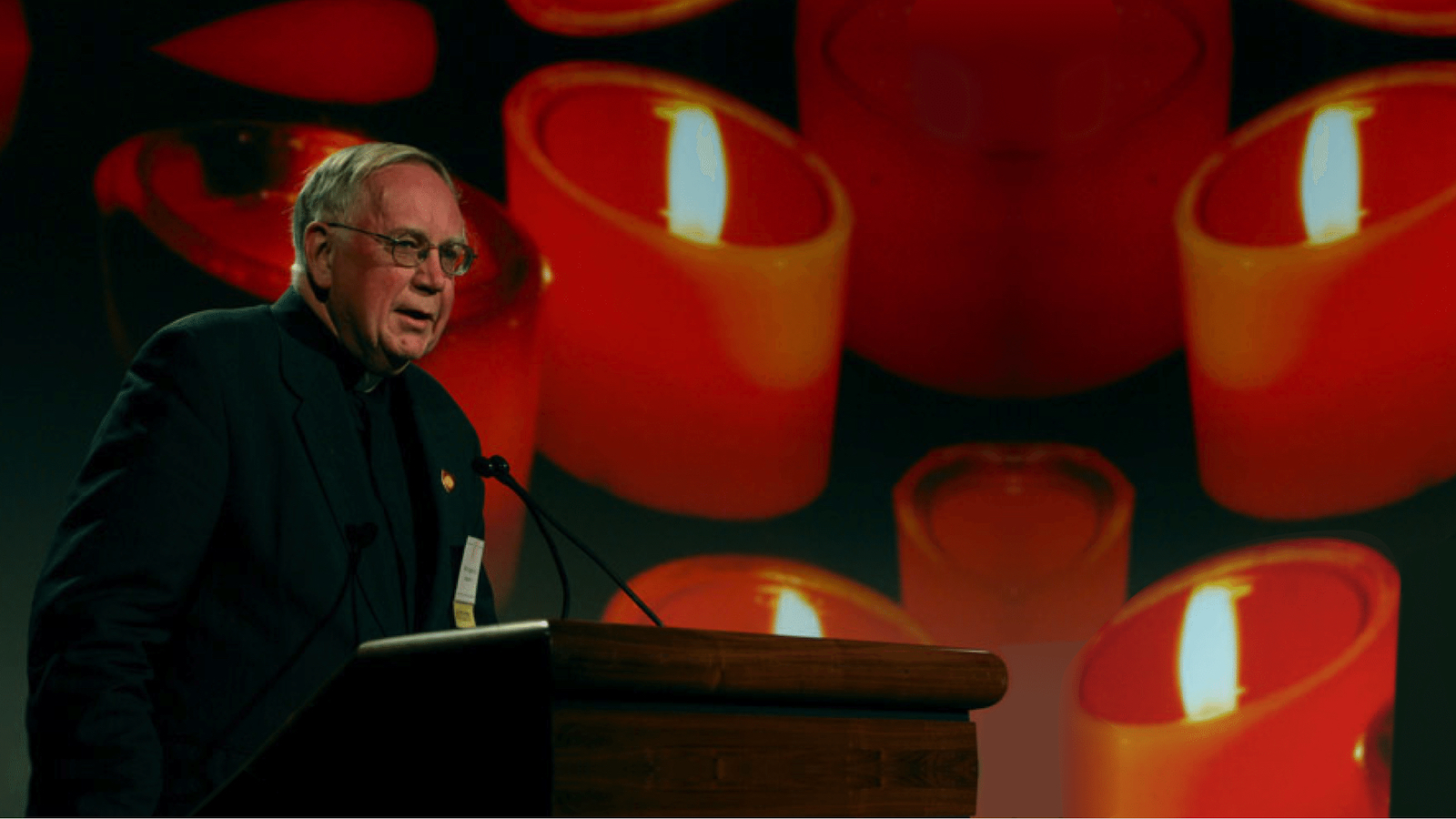 The Berkley Center and the wider Georgetown community mourn the loss of scholar, colleague, and friend Rev. John Langan, S.J., who passed away on Friday, March 20.

Langan was a faculty fellow at the Berkley Center, Rose Kennedy Professor of Christian Ethics at the Kennedy Institute of Ethics (KIE), and Cardinal Bernardin Chair in Catholic Social Thought at Georgetown University. His work addressed pressing issues in Christian social ethics, from just war theory and human rights to capital punishment.

The Jesuit scholar joined Georgetown in 1987 and served on the Berkley Center’s faculty advisory board beginning in 2007 before becoming a faculty fellow in 2015. Vice President for Global Engagement Thomas Banchoff remembers the contributions Langan made to the center.

“John accompanied the Berkley Center from the start with generous and incisive advice,” recalls Banchoff, founding director of the Berkley Center. “We have been incredibly fortunate to have one of the world’s leading experts on the Catholic Church, war, and peace as part of our community.”

​A Jesuit for Justice

Langan, who entered the Society of Jesus in 1957, devoted his career to the promotion of justice, a guiding Jesuit concept.

He was deeply shaped by a project at Georgetown's Woodstock Theological Center. The project brought together scholars, practitioners, and activists to explore the relationship between Christian thought and human rights, breaking early ground on the subject.

"John and I worked together on the Woodstock project exploring human rights in the Americas," recalls Berkley Center Senior Fellow Rev. David Hollenbach, S.J. "His interest in international justice was evident in that project, and he was deeply impacted by the assassination of one of its contributors, Rev. Ignacio Ellacuría, S.J."

That dedication to justice shaped how Langan approached his work across a variety of disciplines, from philosophy and theology to bioethics.

“His passion for social justice led John to ask questions about the justice implications of topics in bioethics that many of us had not considered,” says Daniel Sulmasy, a senior research scholar at the KIE, who also serves as André Hellegers Professor of Biomedical Ethics at Georgetown.

Langan examined the ethical challenges of living in a multicultural world. His scholarship touched on a wide array of issues in global affairs, including humanitarian intervention, nuclear disarmament, and peacebuilding.

“John Langan was a scholar who combined a deep knowledge of the Catholic moral tradition with a precise philosophical mind,” says M. Cathleen Kaveny, Darald and Juliet Libby Professor at Boston College. “His careful, nuanced reflections shed light on complicated and neuralgic questions of morality and public policy, particularly on questions of war and peace.”

Langan also pursued the common good through public theology. He drafted the 1980 “Statement on Capital Punishment” for the U.S. Conference of Catholic Bishops and published commentary pieces on timely issues in popular outlets such as America Magazine.

“John’s voice in the field was steadfast and eternally focused on the dignity of persons and the most vulnerable,” says Michael Kessler, managing director of the Berkley Center. “His scholarly legacy and his pastoral dedication to caring for others will endure.”

​Service for the Common Good

Langan shared his pursuit of a more just world with generations of students at Georgetown, where he taught for nearly 30 years before moving to a Jesuit residence in Baltimore in 2017.

He helped shape intellectual life across the university thanks to appointments in the KIE; the School of Foreign Service, where he served on the core faculty; and the Department of Philosophy.

University Professor Terry Pinkard, who chaired the Department of Philosophy in the late-1980s, recalls the contributions Langan made. "The department's strength in ethical philosophy was only strengthened further by John’s own work in just war theory and in Christian ethics as a whole," Pinkard recalls. "John also knew all the literature from the secular side of philosophical ethics, providing a kind of anchor for the department."

A gifted teacher, Langan passed on his expansive knowledge of Christian ethics and secular philosophy to hundreds of students at the university and served on many dissertation committees, including that of Georgetown President John J. DeGioia.

He also took on important leadership roles at the university and within the field, serving as rector of the Georgetown Jesuit Community and as president of the Society of Christian Ethics.

"During my years editing the Journal of the Society of Christian Ethics and subsequently the Journal of Religious Ethics, I called upon John frequently as a reader of manuscripts—partly because of the breadth of his competencies, but mainly because he was a dispassionate reader, a remarkably articulate analyst, and a demanding but constructive evaluator," recalls Diane Yeager, Thomas J. Healey, C'64, Family Distinguished Professor at Georgetown.

Friends and colleagues remember Langan as a widely read scholar with a passion for the arts. “John was a true intellectual with a very keen sense of realism about him,” says Pinkard. “As far as I could always tell, he seemed to be interested in everything.”

His intellectual passion also extended to genuine interest in people, a personal connection Kessler experienced when he first met Langan in 2004.

“He was immediately generous with his time and mentored me through a number of transitions to life at Georgetown,” says Kessler. “We had many common intellectual interests, and John generously shared his insights and wit over long lunches.”

Langan embodied the ethos of pastoral care, approaching personal and professional relationships with a view toward the whole person. “To be attentive and able to listen is part of what we are called to do,” he shared at a group discussion on the role of Catholic clergy and women religious in the public square.

Reflecting on the human touch Langan brought to his work, Sulmasy added, “While a scholar, John maintained a pastoral sensibility as a Jesuit priest and quietly served the spiritual needs of many, many people. We will all miss him dearly.”