A Place to Call Home

Kandal Province, Cambodia - Many years ago, a small community labored under an unforgiving sun to construct a magnificent Buddhist temple high atop a mountain in Kandal Province, Cambodia. Today, only a stone's throw away from the Buddhist monument, another feat of manual labor, albeit greatly assisted by modern technology, is taking shape - a community of houses for some of Cambodia's poorest people.

On this day, some 150 local and international volunteers are busy moving earth, cutting wood, and laying bricks. The workers are volunteers with Habitat for Humanity, an international Christian-based humanitarian organization best known for the tens of thousands of houses it constructs worldwide each year for the globe's poorest citizens.

My visit to the construction site takes place on a Tuesday, one day into a week-long build that is expected to last until Friday. In just five days, Habitat for Humanity volunteers will construct 21 houses complete with a living room, bedroom, kitchen, and bathroom. At only 31.5 square meters each, the houses are quite cramped, but they are a far cry from the living conditions at the Steung Meanchey dump site on the outskirts of Cambodia's capital city Phnom Penh, where the families have been residing.

To speak with the Habitat for Humanity staff and the soon-to-be-homeowners is to appreciate the unlikely path that led these families away from the dump and more importantly, the role faith affiliation has played in bringing them to this very moment.

Their journey is remarkable and begins with an Australian couple who had visited the dump for years on their own initiative to bring food and other aid to the children there. During one particular visit, the couple met Chea Chandy, who, along with his wife and seven children, called the dump home. Chandy, they discovered, was the leader of a small Christian community that had formed at the site. Chandy showed the couple, also Christians, a crude model constructed out of scraps from the dump of what he and his fellow Christians envisioned as their "dream community" recounts Melissa Cronin, Habitat for Humanity Cambodia's Resource Development and Communications Officer.

Aware that the government would soon be closing the dump, the donors were sold on Chandy's proposal. They decided to help him and his community find new homes. So they returned to Australia, raised about $15,000, and arranged the purchase of a small plot of land in Oudong District, part of Kandal Province, some 40 kilometers outside of Phnom Penh. The question then became how to transform the flat parcel of land into a livable and vibrant community. That's where Habitat for Humanity came into play.

"I think it's one of the most highly organized groups I've ever worked with," says Bernadette Bolo-Duthy, Habitat for Humanity Cambodia's Country Director, of Chea Chandy's Christian community. Bolo-Duthy says, withstanding religious affiliation, the fact that the group was highly organized factored prominently into Habitat for Humanity's decision to engage them as partners. But, she adds, "I can say that the motivation that Paul and Eileen [the Australian donors] have in working with this community comes from their Christian faith."

I've spent almost four months now on the ground in Cambodia investigating how faith-inspired organizations like Habitat for Humanity are helping to develop the country. Part of this investigation has focused on trying to better understand how, on a very macro level, the structure and organization of faith-linked groups vary depending on which faith traditions they identify with.

The story of the now 40-year old Chandy and his Christian community's unlikely rise in fortunes is evidence that religion can and does serve as a potent organizing mechanism in uniting different communities in the quest to provide social goods for the poorest of the poor. Yet it is quite clear that at a more nuanced level, not enough is yet known about why certain faith traditions may lend themselves to more predictable organizing behavior, or about what models currently exist and what the consequences of such characteristics are.

For his part, Chandy is simply overjoyed at the prospect of his new home. "The dump is a place people should not live," says Chandy as he pauses to speak with me while constructing his new home. "There is lots of disease there. People develop fevers and have trouble breathing. But now this new home, it will give benefits to me and my children and their children. We are becoming members of society." 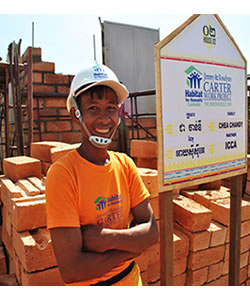