Battambang, Cambodia - It is roughly four o'clock in the afternoon. We've been traveling for more than 30 minutes by motorbike, all the while navigating around flooded patches of the pot-hole strewn roadway. The landscape here is absolutely stunning. The lush forested areas give way to endless fields of rice paddies shimmering in the late afternoon sun, belying the ugly history which saw this area, in the far reaches of Northwestern Cambodia, as one of the last holdouts of the notorious Khmer Rouge Regime.

Yet this is no ordinary school, which is exactly why my colleague and I have traveled here today. We are on a year-long assignment with the World Faiths Development Dialogue (WFDD), a non-governmental organization attached to the Berkley Center at Georgetown University, which seeks to explore the nexus between faith and development. The past decade has seen great interest directed at better understanding the critical role faith-inspired organizations and faith actors play in helping countries to develop. Our task is to carry out a "mapping" exercise in Cambodia. This entails learning who the faith groups and actors are, the issues they are addressing, and the policy questions and concerns that come with carrying out their work.

The school we have come to visit is officially called a "Center of Learning" by the Baha'i-inspired organization, Cambodian Organization for Research and Development, or CORDE. The organization was established in 1994 by a group of Cambodian nationals who had been working as dental assistants in refugee camps. The camps were populated by Cambodians who over the years fled prolonged instability that followed the armed conflict of the 1970s. To date, CORDE has established twelve such Centers of Learning in Cambodia, seven of which are in Battambang.

While no reliable data exists on the number of Baha'is in Cambaodia - this was our first encounter with a Baha'i affiliated group - worldwide, some five million people consider themselves believers of the faith, which is the youngest of the world's independent religions. The Baha'i believe God has revealed himself to the world through a series of divine messengers, whose teachings help guide the advancement of human society. These messengers include Abraham, Moses, Muhammad, Jesus, Buddha, and most recently, Baha'u'llah, who is thought to have lived from 1817-1892.

Baha'u'llah, Baha'is believe, taught the importance of creating a universal civilization where all men and women are equal. Eliminating poverty and educating young generations to be morally responsible citizens are two essential tasks to accomplishing Baha'u'llah's vision of a unified and equal society. And that's where CORDE, with its Centers of Learning and Universities in Battambang and Phnom Penh, Cambodia's capital city, comes into the picture.

"Cambodia went through a period of intellectual genocide," explains Dr. Lee Lee Loh, Executive Director of CORDE, who says that Cambodia's education system provides very little in the way of teaching students to be upstanding students. "We believe education is vital to transforming ourselves and for developing our character and the society. The English we teach has this moral basis for character development."

Five days a week, at the conclusion of the school day at the government-run schools, students make their way to the Centers of Learning, which in most cases are no more than simple cinderblock structures, the size of a typical classroom. Students are divided into different groups around the room depending on age. There is no tuition and all children in the community are encouraged to join. For some, who don't attend public school during the day, this is their only chance to get an education, albeit with a primary focus on English.

Teachers use educational materials developed by outside organizations, which place particular emphasis on short stories with moral themes. Loh explains that one of the more popular sketches is about a 13 year-old girl who is contemplating what she wants to do when she grows up. "She wants to be a nurse because she wants to serve. And her bother becomes a mechanic because it's a noble way of earning money, and at the same time, he can help the community," says Loh. "So with this story, [the students] learn to think about their future, they learn about noble occupations, and they can think about their reliance on God."

Am Sela, 15, started attending this particular Center of Learning in 2007. "I learn English and I learn how to live peacefully with my friends and people in my community," she says, taking a momentary break from her studies. "I like coming here because I get to learn English. When I grow up , I want to become a teacher." The story of CORDE and its work in Cambodia, while unique to this particular corner of the world, actually mirrors quite closely the work of so many other faith-inspired groups worldwide, who, whether filling critical holes in service delivery, or building on existing infrastructure, are filled with a strong sense of purpose and mission, and are charging headstrong in the hopes of better advancing society. Our task here, and the work of WFDD, is to try and better understand each individual group's motivations and the potential benefits and consequences of their actions. It is no small task, which perhaps is in itself a recognition of the critically important and influential role faith-inspired groups and actors are playing in the development world, and a reminder of the need to give due consideration to religion in the development discourse. 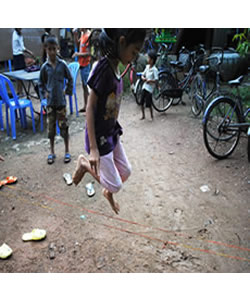