To Fight AIDS In Cambodia, Buddhist Monks Arm Themselves With Peaceful Minds and Loving Hearts

Seated around a long narrow wooden table, too large for the small room in which it is positioned, a group of women is busy putting the finishing touches on their artistic masterpieces. Laughter fills the room as the women size up each other's artistic creations. It's a scene reminiscent of a grade school arts class - except here, the teacher is a monk, the "classroom" has no glass windows (just holes cut in the wall which allow a tropical breeze to filter through), and the students, well, they are all HIV-positive women from Battambang, a rural province in northwestern Cambodia.

Cambodia has long struggled with a high HIV/AIDS prevalence rate, a problem compounded by the effects of a brutal war and genocide which left the country's infrastructure in shambles. High illiteracy rates and low education standards, a fledging health care system, a thriving sex trade, and an uptick in illegal drug use are all contributing factors to the country's HIV/AIDS rate.

Progress, though slow, has been made in bringing down the prevalence rate. According to the National Aids Authority, the government body charged with coordinating efforts to combat the disease, Cambodia's overall infection rate has dropped from two percent in 1998 to 0.9 percent in 2006, the most recent date for which reliable statistics are available. The Authority estimates that today roughly 71,000 adults and children are infected in a country of close to 14 million.

Yet for the half dozen women seated around the table today, these numbers have little relevance. Of more important concern is getting through each day; a struggle eased by the counseling and support they receive not from medical doctors or clinical psychologists, but from Buddhist monks. They are beneficiaries of a fascinating initiative by a Cambodian non-governmental organization called Salvation Center Cambodia (SCC). It's an initiative that sheds light on how mixing faith and the provision of social services can have powerful consequences.

The goals and mission of SCC, which was founded in 1994, are quite simple: have Buddhist monks, who are widely revered in the local communities, provide counsel to people living with HIV/AIDS, and educate entire communities on prevention. In a country that is 95 percent Buddhist, it's no wonder that monks have the potential to leverage religion to help the poorest of Cambodians coping with AIDS.

"Cambodians trust the monks," Tep Monyotha, the program officer for SCC's Battambang office tells me as we sit on his office's veranda. The office is located within the walls of a Buddhist Pagoda, or Wat, and traditional music can be heard drifting from the open doors of the main temple building next to us. "If the monk says something about AIDS, people will believe it." Monyotha adds that Buddhist nuns often pitch in and provide counseling services similar to the monks.

To be sure, the monks do not administer medicine, but they do refer patients to local health centers and often assist in providing money for transportation to the clinics. Neither are the monks registered psychologists, but the service they can provide is spiritual guidance - relating Buddhist teachings to the suffering of the individual.

"The monks counsel people about the benefits of being alive," says Monyotha. "Buddhists believe that if we die a good death, then good things can happen in the next birth." Monyotha adds that to die a "good death" means to die with a peaceful mind, something the monks focus on in their counseling in helping people to reach enlightenment.

SCC also organizes weekly arts and crafts sessions, like the one I witnessed, which give women a welcome chance to take pause from their responsibilities at home. (The monks pay particular attention to counseling women and children who often bear the brunt of the effects of the powerful stigmas against people living with HIV).

The Venerable Emoeak Smey is a Buddhist monk who works with SCC. He travels daily throughout Battambang Province to meet people living with HIV/AIDS. "Before, there was a lot of discrimination against people living with HIV/AIDS," Smey says. "When people would find out they had HIV/AIDS, they wanted to die. But when the monks started counseling them, I can say they were telling us they wanted to live longer."

This year alone, SCC has trained 70 monks who have counseled nearly 180 people living with HIV/AIDS in Battambang Province. SCC also maintains an office in Siem Reap, in the northern part of the country, and in Phnom Penh, Cambodia's capital city.

To be sure, sending monks out around Cambodia is far from the solution to solving Cambodia's AIDS crisis. And there is little way to tell just how effective the monk's prevention messages are. But the motto of Cambodia is "nation, religion, and king," and according to Monyotho, "it means that if we want our nation to be prosperous, religion has to support the nation." Clearly, the mixing of religion with social assistance is seen by some as not only a strategic move meant to enhance the provision of services, but as an imperative characteristic of what it means to be Cambodian. 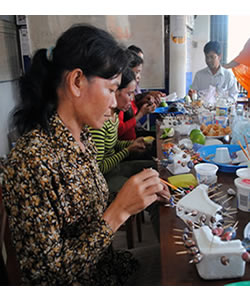