The Ubiquity of Religion in Kenya

Dec 15 2014
Elisabeth Stoddard   December 15, 2014
The pervasiveness of religion in the everyday lives of Kenyans struck me forcibly when our team was in Kenya this November. As an American who, by nature, is conditioned to keep religion relegated to the private sphere, the omnipresent manifestations of religion all around the city of Nairobi were almost jarring. The store fronts of local businesses bear the name of Mary, Jesus, or God; for instance, God’s Mercy Unisex Hair Salon. If the store name had no mention of religion, you were sure to see crosses or art depicting religious scenes somewhere within the store. It seemed as if churches, mosques, synagogues, and temples dotted every intersection. And Nairobi’s numerous schools and health facilities often showed signs of sponsorship or funding from faith-inspired organizations through their insignias or names.


Even the public transportation system highlights the deeply religious nature of Kenyans. Winding around Nairobi’s roads, there is a constant presence of wildly painted commuter vans called matatus that ferry thousands of city-goers throughout the city every day. They often are emblazoned with large taglines such as ‘God never fails,’ ‘Got Jesus?’ ‘Spread gospel not virus,’ ‘Suffering is temporary,’ and my favorite ‘God is da best.’ Christian music plays at grocery stores, restaurants, and more often than not in people’s personal cars. Religion is truly everywhere.

Statistics are spotty but those that are available underscore the religiosity of Kenyans--97 percent of the population ascribes to a religion. A recent Pew Forum survey indicates that 82 percent of Kenyans consider religion to be ‘very important’ in their life and 70 percent attend weekly religious services. As a comparison, only 24 percent of Americans attend weekly services.

Since religion is such a crucial part of the everyday lives and cultural fabric of Kenyan society, it seems only natural that development or peacebuilding would be framed within this context. However, Kenyan development practitioners during a range of interviews argued that the government and Western development actors do not effectively engage faith actors or consider religion’s role in development issues.

Religious organizations may well be the most resilient, durable, and widespread development actors in Kenya: the Catholic Church reports that it operates 28 percent of the nation’s primary schools and over 30 percent of its secondary schools. The Christian Health Association of Kenya and the Kenya Council of Catholic Bishops also run an extensive network of health facilities. But, faith actors’ reach extends not just to health and education; faith-inspired organizations are deeply involved in almost any development topic or sector.

The pervasiveness of faith actors in Kenya’s development landscape has resulted historically from the large role of missionary organizations during the colonial period, so that churches especially took on large roles in the early post-independence years when government capacity was limited. With ambitious new standards and limited resources (human and financial), the government was stretched thin. Churches and faith actors expanded their existing services to help supplement and they continue to play large roles today. However, with the strengthening of national public systems, stronger government infrastructure, and more resources, the government’s role has increased. Coupled with large numbers of external actors, the needs for strategic focus and coordination in development have grown exponentially. Faith institutions need to be part of this “harmonization” process.

Notwithstanding important shifts in understandings of respective public and private roles in service delivery, the faith actors are still important players and their work and roles deserve more attention than they generally receive. Kenya has an estimated 30,000 faith-inspired organizations which implement development programs of many kinds through established church structures, religious leader initiatives, and faith communities. Their extensive networks and first-hand knowledge can and should be utilized as new public development programs take shape.

With the lens of a Western secular society, wariness of including faith actors in the development conversation is understandable. Questions about inappropriate proselytism, heavy handed efforts at conversion, and privileging one group over another tend to spring to mind. I even found myself raising such questions despite the fact that I have studied religion and its role in peace and development for my entire academic and professional career.

To take an example, during a visit to a small public school in Mathare slum, I was invited to attend a graduation ceremony. I was eager to experience some of the school activities, so I accepted. To begin all the teachers came up to give small speeches about the year and to give advice to the students. I was taken aback to hear every teacher start their speech with ‘First, I need to thank God’ or something similar. The ceremony was also bookended with a prayer by the entire school body. The school was public (no religious affiliation) and the students were 50/50 Christian and Muslim.

My ‘separation of Church and state’ alarms sounded. Arguments against prayer in public schools began racing through my thoughts. But, I realized that my reaction is exactly the problem of Western development actors. Our own cultural lens is imposed onto approaches to international development.

We heard quite often from Kenyan development practitioners that Western views of secularism had colored the policies of the Kenyan government. Both secular and faith-inspired development actors spoke about the great potential religious leaders and faith communities can bring to pervasive issues like corruption, high birth rates, gender equality, or ethnic tensions. For many issues, they believe religious leaders and faith communities hold the linchpin.

Concerns about various aspects of religious practice may be well founded, but obviously a stereotyped, uniform conception of secularism is unlikely to translate to Kenyan realities. International development actors should recognize their biases about religion and make sure that development programs are well and truly framed within the Kenyan context. This is likely to mean more interactions with faith actors and active consideration of religious dimensions of issues like family planning or gender roles.

Faith actors’ influence on Kenyan society, along with their long histories of development programming, makes them an important part of the future of sustainable development in Kenya.

As the government continues to expand and strengthen its development work, development practitioners would do well to recognize the crucial role of faith actors and institutions in Kenya’s past and present, while learning from them to build a stronger future. 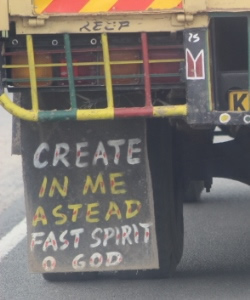