An Exchange on Women's Roles for Peace: Is Religion a Source of Strength or an Obstacle?

An Exchange on Women's Roles for Peace: Is Religion a Source of Strength or an Obstacle? Video Player

This public event concluded a two-day symposium on women's approaches and work to build peace. With an emphasis on the roles of religion, meeting participants reflected with a broader audience on their conclusions, concerns, and ideas for making their work for peace more effective. The symposium and public event were part of a larger project including interviews with participants, as well as other leaders who could not be present. The public event brought together a group of practitioners, academics, and policymakers of different faith traditions and from different world regions, including Africa, East Asia, the Middle East, and North America. Various organizations were represented including USAID, US Department of State, and the United Nations.

The symposium was co-sponsored by the Berkley Center for Religion, Peace, and World Affairs, United States Institute for Peace, and the World Faiths Development Dialogue. 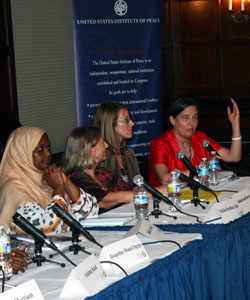 An Exchange on Women's Roles for Peace: Is Religion a Source of Strength or an Obstacle?

To recognize and understand better the role of women in religious peacebuilding, the United States Institute of Peace (USIP), the World Faiths Development Dialogue (WFDD), and Georgetown University’s Berkley Center for Religion, Peace, and World…
Opens in a new window