Gianna Maita on the ESJ Project

What did you study through the ESJ Project? What are some of the larger takeaways from your research?

I studied the new service-learning program at the Universidad Centroamericana (UCA) in Managua, Nicaragua, comparing the level of engagement of 2013 UCA students to those of the participants in the 1980s. Many of the interviewees thoughtfully considered why there had been a change in youth interest in civic involvement over the past three decades.

What did you find to be the most challenging aspects of the program?

I think the most challenging thing for me was language immersion. In Nicaragua, few people I met knew English; it wasn’t part of their school curriculum. Since I had been an advanced Spanish speaker a few years earlier, I figured it would be easy to get back into it. But I had learned other languages in between and found that searching my brain for Spanish words, instead of Arabic or Afrikaans, was more exhausting than expected! For the first two weeks, I had to work extra hard to keep up in back-to-back interviews in Spanish.

How did you change during the course of the ESJ Project?

Two major things about my ESJ experience still stick with me today. First is the passion I discovered for research. After the ESJ Project, I slowly came to recognize how useful the experience was for writing my justice and peace studies thesis. I was less nervous about interviews, transcription, and all the other aspects of fieldwork, so I was really able to throw myself into that next research process. By the middle of my senior year, I knew I wanted to keep doing research.

Second is my re-familiarization with the Spanish language and Latin American literature. In 2014, it had been a long time since I had picked up a novel written in Spanish; it just seemed too daunting after so many years “away.” After conducting a research project in the language, reading a book in it didn’t seem so difficult anymore. Today, I still read Spanish-language novels and plays in my spare time—and that is definitely thanks to that confidence boost from the ESJ Project.

What is your current occupation? How did your involvement in the ESJ Project inform your career choice and graduate study?

I studied for an M.Phil. in justice and transformation at the University of Cape Town from 2016 to 2017. My research was about how gentrification in Woodstock, a neighborhood in Cape Town, affected the senses of place of working-class residents who remained in the neighborhood.

Now, I work at an NGO focused on community development in Cape Town, South Africa, where I am responsible for research and project support. The ESJ Project definitely gave me the confidence to continue doing research. And I feel that the topic I studied (service-learning) also gave me the desire to work more on applied research. I loved academia, but I feel much more comfortable in the NGO space, where it is easier for our research findings to meet communities where they are. 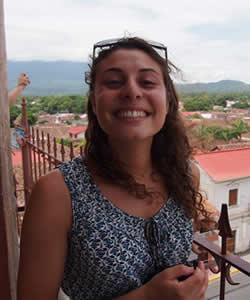