Across the world, the dominant state-based modes for asylum and protection are in crisis. Governments of both left and right have introduced increasingly strict asylum policies in an effort to deter asylum seekers. At the same time, however, the causes for people to flee and seek asylum are becoming more varied. These dynamics are contributing to a failure of asylum and refugee protection. Amid this failure, religious actors have emerged as major providers of services for asylum seekers and those who have not received refugee status, as well as significant campaigners for alternative modes of protection and belonging.

Participants discussed the current state of the asylum crisis and the present and potential future roles of faith-based actors and religious worldviews to rethinking responses to protection beyond the nation-state.

This event was organized by the University of Kent and the University of Groningen with Georgetown University's Institute for the Study of International Migration and Berkley Center for Religion, Peace, and World Affairs. It was made possible by a grant from the British Council’s Bridging Voices program. 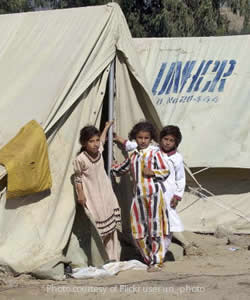