An International Response to a Global Crisis: A Conversation with Baroness Warsi on Religious Freedom

An International Response to a Global Crisis: A Conversation with Baroness Warsi on Religious Freedom Video Player

Showing the A Conversation with Baroness Warsi on Religious Freedom Video

The United Kingdom’s first ever minister for faith, Baroness Sayeeda Warsi, made the case for an international response to religious persecution. Drawing on the British government’s strategy to promote religious freedom at home and abroad, Foreign and Commonwealth Office Minister Warsi offered ways forward in tackling the persecution of Christians and other minorities—something she has dubbed a "global crisis." The Religious Freedom Project's Tom Farr was the moderator. 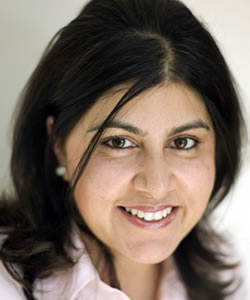 An International Response to a Global Crisis: A Conversation with Baroness Warsi on Religious Freedom

Baroness Sayeeda Warsi is a lawyer and politician who became the first Muslim to serve in a British cabinet upon her 2010 appointment by Prime Minister David Cameron as minister without portfolio. She was the United Kingdom's senior minister of state at the Foreign and Commonwealth Office and minister for faith and communities from 2012 until she resigned in August 2014, citing the government's “morally indefensible” policy on Gaza. A Conservative Party member, she became vice chairman and advisor to leader Michael Howard in 2004 and was appointed party co-chairman in 2010—the first Asian to chair a major British political party. She was elevated to the House of Lords in 2007, becoming the youngest peer in Parliament. She participated in a 2009 landmark debate with British National Party leader Nick Griffin on Question Time. Warsi studied law at Leeds University and worked for the Crown Prosecution Service before setting up her own legal practice; she also served six years at the Joseph Rowntree Charitable Trust.