Dr. Alaa Murabit is a Canadian physician and leading international advocate for inclusive peace processes. Nicknamed “Doogie Howser” by Jon Stewart, Murabit is a UN high-level commissioner on health employment and economic growth and one of only 17 Sustainable Development Goal Global Advocates appointed by the UN secretary-general. Her June 2015 TED Talk, “What My Religion Really Says About Women,” was selected as the TED Talk of the Day and one of four moving TED Talks you should watch right now by the New York Times. She was also featured on the "Forbes 30 under 30" list for 2017. Murabit is now the executive director of Phase Minus, which provides thought leadership in conflict resolution, national security, security cooperation, and defense technology. Her talk at Georgetown focused on women’s rights, sustainability, and America’s changing role in the global conversation. 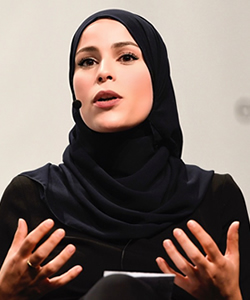 RSVP to Women’s Rights, Sustainability, and America’s Changing Role in the Global Conversation