Georgetown hosted a screening and panel discussion on Friday of an award-winning Flannery O’Connor documentary co-directed by Rev. Mark Bosco, S.J., vice president for mission and ministry at the university.

The feature-length film, Flannery: The Storied Life of the Writer from Georgia, features original animations and music alongside archival footage, personal letters, and published work of the iconic Catholic author, who passed away in 1964.

“This film is a feat of archival work alone,” said Paul Elie, a senior fellow at Georgetown’s Berkley Center for Religion, Peace, and World Affairs, who moderated a discussion after the screening. “To see all that material together is astonishing.”

As Coffman and Hardin documented the material through video and photography, key components of the documentary, Bosco discovered sources during his research on the film that were heretofore only rumored to exist.

One such source was a prayer journal that O’Connor kept while in college.

Bosco had heard about the journal, but no one knew of its location.

“And then, at the very bottom of this box, there it was,” he said. “It was the first time that I had seen it or heard that anyone had seen it before. So immediately, I handed it to Ted, who recorded every page.”

Jon Peede, chair of the National Endowment for the Humanities, which provided support for the documentary, introduced the screening.

“O’Connor wrote in Mystery and Manners, ‘It takes considerable courage at any time and at any place not to turn away from the storyteller,’” he said. “She was right. We are fortunate tonight that these talented filmmakers turn themselves toward this story, toward this unfolding of a person, a people and a place.”

Several hundred Georgetown students and community members watched the 90-minute film, which explores the connections between O’Connor’s life, from her early childhood and education to her experience living with lupus in rural Milledgeville, Georgia, and her writings.

The film, like her many short stories, touches upon still-timely themes such as disability, gender, and race.

Elie opened the conversation by reflecting on his own work as an O’Connor biographer and noted how the disorganized state of her archives complicated his research into the Southern author.

The filmmakers faced the same issue, and while they used digital versions of original photos and documents – such as excerpts from the prayer journal – they still grappled with limited source material.

“One of the challenges of the film is that there is just that one television interview of Flannery and not many photographs,” reflected Coffman, noting that the “cartoon nature” of O’Connor’s fiction led her to use motion graphics and animation in the film.

Coffman worked to assemble a team of primarily female animators, editors, and photographers to capture the unique aesthetic of O’Connor’s fiction.

“We hope that the images, illustrations, and animations speak not just to her fiction but also to her biographical life,” she says.

Walking in Her Footsteps

The combination of archival footage and animation in the film, coupled with on-the-ground filming of key places where O’Connor lived and worked, allows for an immersive look into her life and times.

“Some of the things we did were really about creating deep witnessing,” said Hardin. “So that means filming from the chair she wrote from and imagining what she would have heard. We did that in all the spaces we went to, just trying to see if we could walk in her footsteps.”

By walking in her footsteps, the filmmakers believe they have made an important contribution to scholarship on and popular knowledge of O’Connor.

“We wanted to tell her story – a story about living with disability and channeling that as a way to focus these wonderful stories,” Bosco said. “We wanted to show her relevance.” 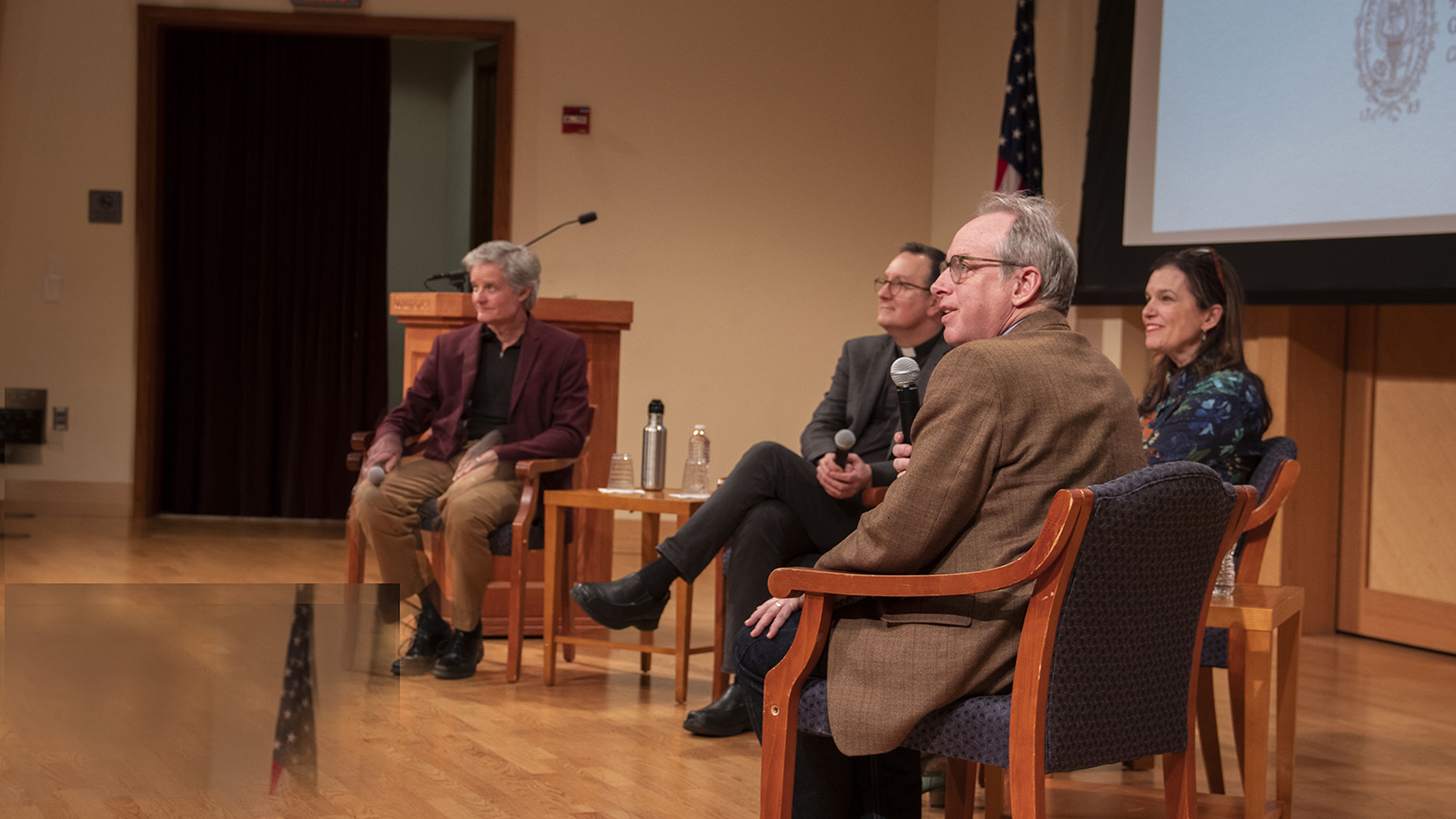 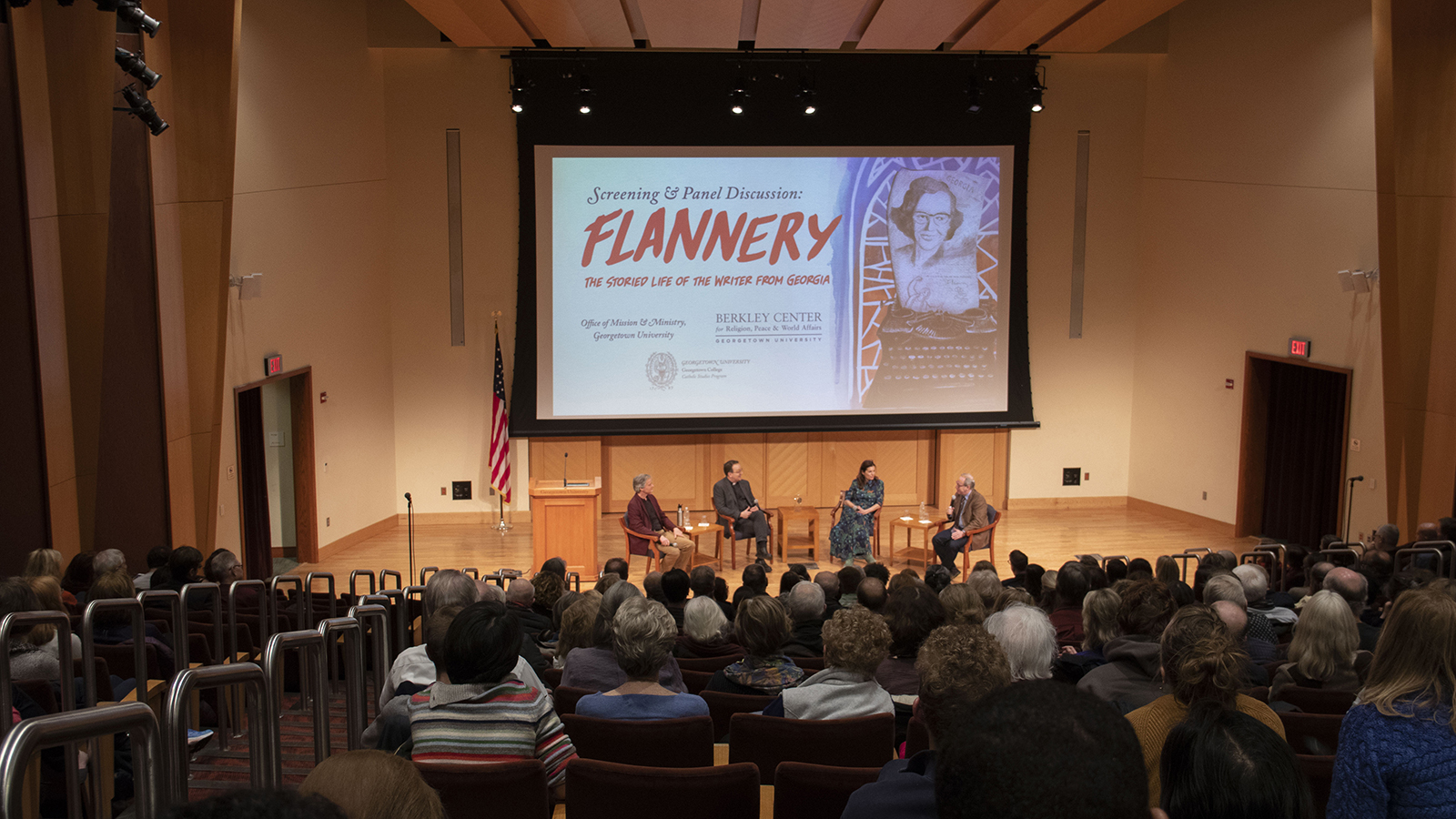 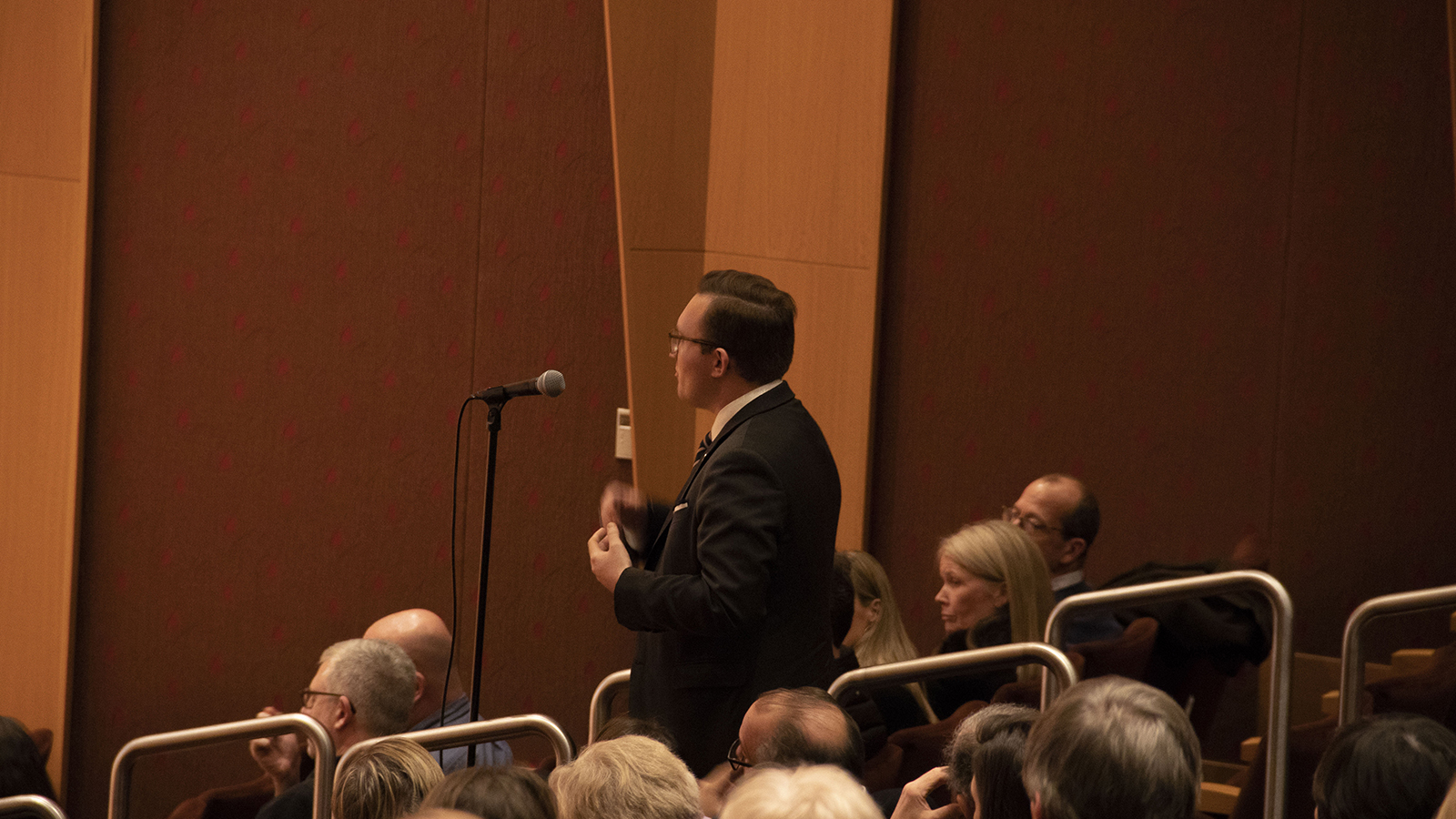 An audience member asks a question about "Flannery: The Storied Life of the Writer from Georgia." 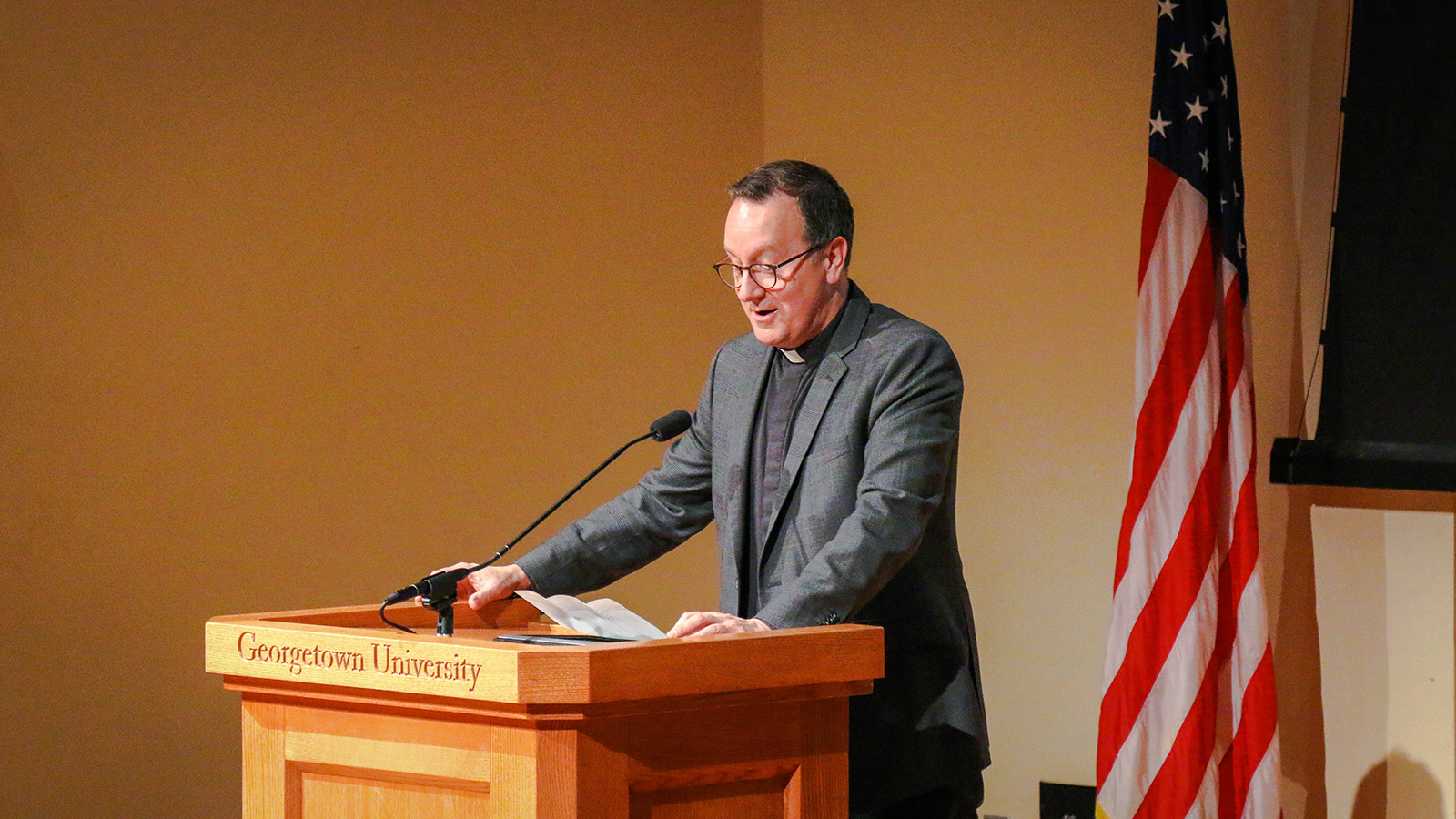 Rev. Mark Bosco, S.J., vice president for mission and ministry, at the podium. 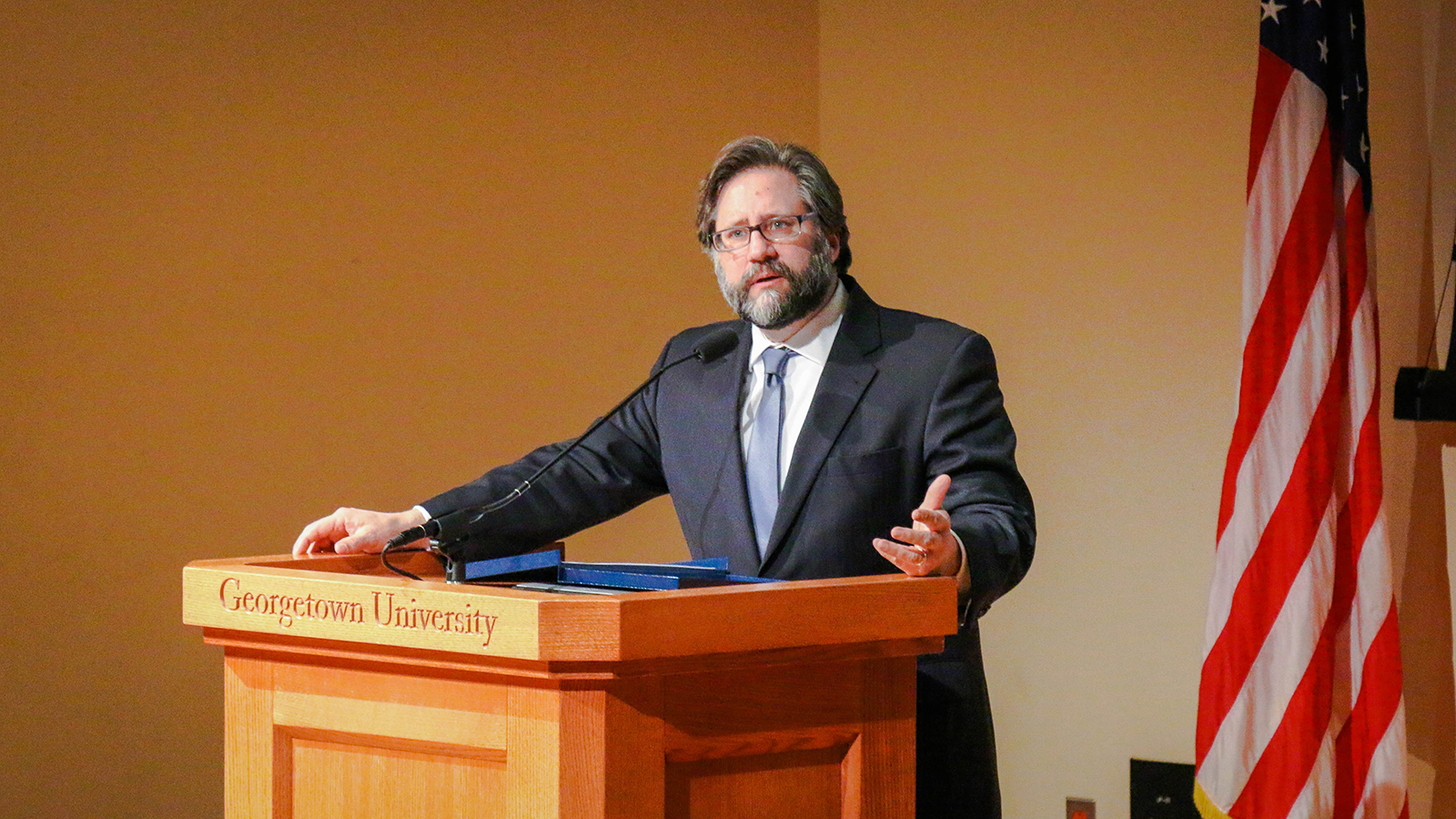