The Challenges and Opportunity of Women in Religious Leadership: The Episcopal Example

Women have been leaders from the beginning of consciousness—learning where to find edible and healing plants and leading others to gather them, and passing on that knowledge to future generations. That is at least part of what Eve is up to in Genesis. Like Miriam, women have led celebration, song, and lament throughout time, and tended to bodies before burial as did the Marys of the Gospels. Women have challenged societal injustice with the tools available—words and prophetic actions—the widow to the judge, the Syrophoenician woman Jesus engages, the suffragettes, and women’s rights workers over centuries.

Leadership means acting for change, and encouraging others to join a movement toward a different future. Christians speak of that future as the Reign of God, a society of peace with justice for all.

The Judeo-Christian tradition has had a mixed attitude toward women as leaders, particularly sacred leaders, in spite of a deep fund of feminine images of God—Wisdom, Shekinah, God as a mother bear; Ruach as Holy Spirit. God’s image is reflected across the spectrum of humanity in the Jewish tradition, with women leaders as matriarchs, prophets, judges, deliverers of their people, and in decidedly non-traditional roles and actions. Yet the formal religious leadership of Israel and Judah remained exclusively in the hands of particular groups of men until very recently. Women have always had a significant religious role in the family, including welcoming Shabbat and teaching children the ways of the covenant.

Women are prominent in early Christianity—in Jesus’ intimate circle, particularly Mary of Magdala, and as leaders of communities of his followers. Archaeological and written evidence shows women as ordained, liturgical leaders in the early church, a practice soon extinguished as Christianity became a state religion in the fourth century. Yet women continued to emerge as leaders in the developing monastic tradition, as supporters of Christian communities, as pilgrims and writers, and as theologians and mystics.

The patriarchal nature of much of human society in recent millennia has meant that only extraordinary or outstanding women leaders have been noted and remembered. Women have exercised religious leadership roles in three primary spheres: in the home and local community, as domestic tradents of the faith, through spiritual formation of children and households; in communal monastic environments; and as more public religious leaders, reformers, benefactors, theologians, and evangelists in their own right.

The great Western missionary thrust of the last half-millennium began to significantly engage women in the nineteenth century when some began to travel with husbands to other parts of the globe in search of converts. Single women found encouragement in their witness, and by the late nineteenth century were being sent into mission territories at home and abroad, coming to represent two-thirds of all Episcopal missionaries.

In 1889 the General Convention authorized the “setting apart” of women as deaconesses for ministry in both foreign and domestic environments. They developed and worked in ministries of education, healing and healthcare, child welfare, parochial and pastoral contexts, with indigenous and indigent persons, in cities, rural areas, reservations, and in foreign lands.

One of the challenges to formal religious leadership by women is a frequent perception of inexperience for their lack of formal and titular leadership qualifications. Patriarchal norms are often blind or prejudiced toward the domestic and informal leadership that makes households and communities function and thrive, yet that has been the training ground for women who have entered more formal leadership roles later in life or when those roles first opened to them.

Ordination of women has been a greater challenge than lay leadership. There is a resistant strand of Christianity that still holds that maleness represents a higher order of creation, and that since Jesus was male, no female can be validly ordained to preside at Eucharist. Objections to ordained women’s leadership have been both fierce and intransigent, yet when women leaders are experienced in local settings, such resistance often dissipates. Incarnate encounter can be radically transformative!

Florence Li Tim-Oi was the first woman ordained priest in modern times, in Hong Kong in 1944, but was only permitted to function for a few years. The Episcopal Church began to ordain women by regularizing deaconesses in 1973. Women were first (irregularly) ordained priests in 1974; and without question since January 1977.

The trajectory for ordaining and consecrating women as bishops has been shorter yet equally fraught. The Diocese of Massachusetts elected Barbara C. Harris as bishop in 1988. Despite voluminous and loud protests she was consecrated in early 1989. The pattern in the early history of women bishops has seen their election as suffragans or assistants in far greater numbers than as diocesan bishops. To date, the Episcopal Church has elected 20 women bishops, nine of whom are or have been diocesans. The Episcopal Church elected the first woman to serve as primate in the Anglican Communion in 2006.

Why does women’s religious leadership matter? Most fundamentally, the presence of women and men as sacramental, liturgical, and pastoral leaders gives incarnate evidence of human creation in the image of God.

Women often, though not universally, bring a more collaborative and participative style to their leadership. Most Western institutions are shifting away from a rigidly hierarchical style of leadership; the church is usually slower to respond. Women’s leadership has also tended to more broadly include the concerns of all members of the community. Community development workers know this in the maxim, “when women are empowered, the whole community flourishes.” This is a reality for all varieties of women’s leadership, for work with prostitutes and orphans, hungry children, forgotten prisoners, and the power that voting can bring have all been ministries frequently begun or led by women. Religious leadership can also bring access to political leadership and systems needed to transform social injustice.

The Gospel needs the voice and active ministry of women as well as men to work toward reestablishing the image of human partnership in Eden, to serve together in caring for the whole of God’s creation, and to be co-creators with God of a future that incarnates the divine intent for a restored creation called shalom. 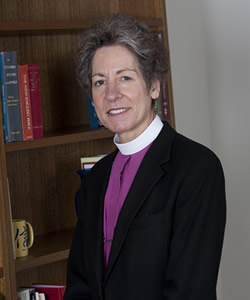 The Most Rev. Dr. Katharine Jefferts Schori is the presiding bishop and primate of the Episcopal Church, elected in June 2006 as the first female primate in the worldwide Anglican Communion. As such she is chief pastor to the Episcopal Church's 2.1 million members in 17 countries and 111 dioceses, and she joins leaders of the other 37 Anglican Provinces in consultation for global good and reconciliation. Jefferts Schori's career as an oceanographer preceded her studies for the priesthood, to which she was ordained in 1994. She then served as a priest, university lecturer, and hospice chaplain in Oregon before being elected bishop in the Diocese of Nevada in 2000. She holds a B.S. from Stanford University, an M.S. and Ph.D. from Oregon State University, an M.Div. from Church Divinity School of the Pacific, and several honorary doctoral degrees.
comments powered by Disqus