Background: As part of the Education and Social Justice Project, in April 2021 graduate student Tierra Hatfield (G’22) interviewed Kamala Bhattarai, the parent of students in the Partnership in Education (PiE) program at St. Xavier’s College (SXC) in Kathmandu, Nepal. In this interview, Bhattarai discusses her family’s experience with PiE during the COVID-19 pandemic. The interview was translated by Diya Barun, a PiE volunteer.

Could you please tell me a little bit about yourself?

I’m originally from a district in India, but I came here with my husband. Now I am a housewife and my husband has a stand in the market, so the income source is just my husband's work. It has been very difficult in this COVID-19 crisis.

How did you find out about the PiE program?

I came to know PiE through my daughter. And so, my eldest daughter was also, had also studied in high school and so, through her friends, she came to know about the PiE. There was another program called SAMPLE. So we came to know about these two programs, PiE and SAMPLE. Unfortunately, the programs had been started by us, due to the global crisis they stopped, but that's how we joined PiE and yeah sure.

How many children do you have and which of your children are in the PiE program? How long have they been in PiE?

I have three children, two daughters and one son. So, two daughters have joined the PiE and also my brother-in-law's son has also joined PiE. But they won’t do the classes, so they would not continue with class [Grade] 5. And so, she studied, for my eldest daughter, she studied for two years in the PiE program. Almost two years. She is in Grade 9 now.

Can you tell me a little bit about your experience with PiE? How has the PiE program influenced your kids’ education?

I am very really happy with the program because my kids’ academic studies are improving and have improved since the beginning, so I am very grateful toward the PiE, and I’m really happy that my children, they have joined PiE.

Before the COVID crisis, did your children go to PiE every day?

My second daughter who's studying in PiE now, was having a break. Maybe, when, when you're big in PiE she did not come regularly because she had morning classes in high school itself. And we also had an earthquake and our building collapsed, so the school building got collapsed, so from then she had to study morning classes so she could not join PiE after that. The earthquake was before the COVID, which was not more than a year. So now, my daughter joined PiE again, maybe since March again.

Did the PiE program trainees or volunteers ever visit your home?

So, I had the regular home visits before COVID for that, and since like, because of my daughter could not join PiE again in the in between, so from there, the home visit, it was stopped. But I was really happy that the teachers came and visited my home, you know, understood the situation of the family and explain to me how my children as a student is improving.

Could you tell me a little bit about what it was like for you and your family when the COVID crisis started?

So in the beginning, I was really scared of this virus because we had no preventive measures or nothing. Also it was that, the, it would affect the old people more quickly, so I had my relatives coming here in Kathmandu and so I was really scared about how to manage the old people and my children together. So, so I went back to my village with my relatives and I took my children. Also economically, since there was a lockdown, so, it made it so that my husband could not work properly, or could not earn properly, so it was really difficult for him and for us.

What are the conditions of the government schools that your children attended? Did they close down during the start of the crisis and did your children have to stop school?

So, since the government school had to be closed, and we went to the village, like I said before, I went to the village, but there was not any source of the internet connection or any devices to join the online classes. The government school, they initiated online classes, but because of our personal problems we could not have internet connection or, you know, we could, we could not connect in the internet. Back in our village, we used to buy data and used to study in online classes, but only sometimes. Sometimes I would not have money to put the data for joining the classes or it was very difficult. And you know many of the classes was missed by me and my children.

Did you get any support from the schools during the crisis, or any support for your children to join the online classes?

So, there was not a specific help during the lockdown and, but when the lockdown was kind of loose, so then, after school all the students who did not have internet connection or devices in the school itself, and so a small group study was done within the weekday, or after lunch. My daughter loves to study, my daughter loves to study and since her morning classes were stopped and also the, the SAMPLE program was also stopped doing it because it crisis, so her friends used to tell her that PiE had started again so just for studying she joined PiE again.

The public schools will have already been started by the government, and because there was no lockdown, the lockdown was like lifted late, so the school had started and then she moved back [to Kathmandu] after this was. But now all the educational institutions is closed down.

How have the decisions taken by the government schools and the PiE program in response to the crisis affected your children’s education and your family?

I understand that the PiE program and the in-person classes are shutting down again this month because the COVID cases are increasing in Nepal. How has this impacted you, and are you getting any support from PiE or from the government schools?

For now, the PiE program has done nothing for these reasons because it was closed just the day before yesterday, so there's not any government support either. We are not sure how long the schools will be closed.

During the short period between January to March this year when the lockdown was lifted, has the return to the in-person PiE classes helped your children?

My daughter is the, she has been having difficulties in studies before joining PiE, and the program has helped her to improve studies for now.

Not PiE program, but the SAMPLE program, which has not stopped right now, so they have been calling time to time and asking the help them with their, you know they provided some kinds of food and also academic payments or any difficulties.

Who runs the SAMPLE program, is it part of the government educational department services for the crisis or is it separate?

As far as I know, it was started by a group of students. I exactly don't know about SAMPLE because it has been heard a little bit about this to the children who went to SAMPLE.

Could you tell me a little bit more about your children’s experience with PiE since they re-joined the program at the beginning of this year after the lockdown?

Yes, so besides education, PiE has help for my children to really grow as an individual. For example, my daughter, she was very introverted before, but after coming to PiE her communication skills has increased and she had made lots of friends, and now she's speaking with everybody and, you know, sharing things and she is really happy here. And also I am usually being always worried about my daughter’s eating pattern, because when we were back in the village she does not eat too much, but after coming to PiE, so since January, she has improved and has had a balanced diet of eating and I am happy because of that.

Is the PiE program still doing house visits this year?

No, the teachers have not come to us for the visit.

How are you feeling now about the crisis and the increasing cases of COVID in Kathmandu?

I had a real difficulties in coping with the impacts of COVID-19 since, since that notice from the government. And the children, the children have to stay in home. And economically also my husband's work has been stopped doing this slow down, so they could not, you know, they had very difficulties in sustaining their normal days or getting out their daily activities because of this COVID-19. And for me, I faced the most difficulties because the children was in home, because you know I have not studied so much, so I could not help children with their studies. And I could not have anyone come over so that no one would have died, so it was really difficult for her.

Do you notice other people having similar or different difficulties as your family?

I think that they face, the most they face the same problems. So they had to face economic crisis all the time. And yes, and also, I live in a rented room, so you know, I am living in a room and I had very much difficulties in, you know, being there are not going out or anything.

I would like to have the children go to school, and you know, like to have the studying because the government school has been stopped. So rather than stopping the school completely, I would like to have the classes, maintaining the social distance or having a very small group of students in the school and calling them in the school itself and teaching the content rather than having online classes. And also that the government should have given us a bit time to prepare ourselves for the lockdown happening in the beginning, so yeah, I was feeling quite difficulties in doing the daily activities because of the lockdown.

Has the school been communicating with you throughout the crisis and the lockdown, to explain what decisions they've made and what is happening with the classes?

So yes, the school teachers used to call me regularly like asking us about our condition and telling us what the school has decided for the classes and when they will be back there.

For PiE, before it was like that but after lockdowns we discontinued PiE so they could not contact us but, but for the other students, they would have. PiE has contacts in Facebook and social networking site, so the trainees and volunteers used to talk to us about the distribution and what PiE program is doing during, like that.

Thank you very much for talking to me. I appreciate your time and all the things you shared with me.

I am really happy to communicate with you. 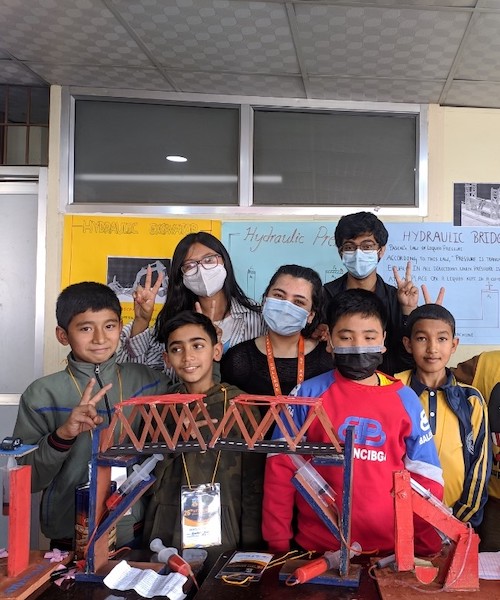 Addressing the Digital Divide in Nepal