A Discussion with Canon Andrew White, President of the Foundation for Relief and Reconciliation in the Middle East

Background: As part of the Future of Track-Two Diplomacy Undergraduate Fellows Seminar, in spring 2011 Mary Siebenaler interviewed Canon Andrew White, president of the Foundation for Relief and Reconciliation in the Middle East (FRRME) and Anglican pastor of St. George's Church in Baghdad, about the intersections of U.S. foreign policy, religion, and track-two diplomacy.

What brought you to this work?

I had already done reconciliation work in North Africa and Israel-Palestine, before beginning in Iraq in 1998. Because of the fact that I was there already—of the ties that I had already formed. I was in a good position to help with reconciliation efforts after the war.

What’s the role of religion in Iraq?

It is true that much conflict is caused by religion, and that is precisely why it cannot be solved without taking religion into account. I remember speaking with presidential envoy Paul Bremer, who was in charge of reconstruction efforts. I tried to explain to him how important religion is in Iraq and in the broader Middle East. He brushed it off, thinking that he’d take care of providing basics like water and electricity first, but he soon realized he couldn’t even do that without taking religious issues into consideration.

Do you think the U.S. government can be more effective by working with faith-based groups like FRRME?

Yes. I could do more than a secular diplomat to reach out to clerics [Sunni, Shi'ite, etc.] because I was a religious leader, too. We had that bond, and it was something real, going back before the war. And in a society where religious leaders are so powerful and have so much influence over the population, the United States must have a way of approaching them. Just recently last fall, when a lot of violence was erupting against Christians and the diplomats were wondering how to make it stop, my relationship with the clerics was once again put into play as I persuaded them to issue a fatwa against the violence.

What are the differences between track-one and track-two?

Actually, I’ve found sometimes it’s hard to distinguish track-one and track-two. Much of our work has been funded and supported by the U.S. Department of Defense, and I have regularly talked with General [David] Petraeus regarding the synchronization between our initiatives and his military objectives. In order for track-two actors to be effective, it is almost essential that they have a working relationship with the political powers.

Religious diplomacy and traditional diplomacy are mutually enriching. Religious individuals cannot approach conflict situations solely on the power of their faith. They need practical training, and they can acquire important knowledge from traditional diplomats, while retaining their own perspective to create a unique approach.

Did you work in coordination with secular organizations?

There are very few NGOs—as we Westerners conceive of them—in Iraq. We worked with []the United States Institute of Peace].

Is there an effect of rigid adherence to separation of church and state?

I’m no expert on the American Constitution, but I can say that the various political squabbles and partisan divides present in American politics have given us a lot of difficulties. It is important for us to maintain a good relationship with the U.S. government, and indeed President [George W.] Bush was very supportive of us. But it seems that an “in” with one administration automatically becomes an “out” with the next administration, as we have discovered under [Barack] Obama. In fact, Madeline Albright warned me that we would suffer from the lack of continuity in American government, and she was right. We’ve relied on the Danes a lot recently, but it is difficult. It is so important to maintain ties and have sustainable sources of support.

What is the role of religion in reconciliation?

Reconciliation is not easy. It requires long-term relationship-building. Slowly and softly, each side must be allowed to hear the story of the other, to absorb their narrative. For missions like this, it is important to be grounded in deeply-held, genuine beliefs, because they will be tested.

What are your recommendations for the U.S. government to better engage civil society abroad?

Stop seeing and doing everything “the American way.” Learn that sometimes the things you don’t like and don’t believe in are an inseparable part of the nation you are dealing with. Contextualize. I am personally very orthodox in my beliefs, and I don’t expect less out of others. It’s all about approaching the world as it is, and not as you envision it. 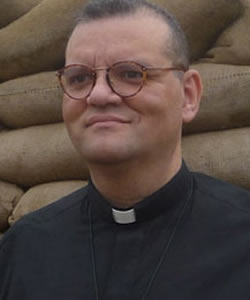