Background: As part of the Education and Social Justice Fellowship, in July 2016 undergraduate student Carolyn Vilter interviewed Carmen Escobar, a Honduran immigrant with a young daughter, outside the Mexican Refugee Aid Commission (Comisión Mexicana de Ayuda a Refugiados, COMAR) in Tapachula, Mexico. In this interview, Escobar recounts her experiences as a migrant traveling from Honduras, and she outlines on the approval process immigrants must undergo once arriving in Mexico.
What are they doing here at this office [COMAR]? What’s being denied?

Well, here we’re undergoing a process which takes around three weeks. We’re here, migrants, every Monday, to get signatures. What happens is that when you reach a quantity of nine or 10 signatures, they interview you and request a declaration of the fact that you’ve come here fleeing your country. After that, they take their time—some three weeks of working days—to watch and analyze your video to see if they can help you or not. If they approve you, [they can] give you a credential with which I think you can live anywhere in Mexico, in any state, and don’t have to return to your country. There’s also a requirement that says that it doesn’t matter whether there’s evidence or not, but even so, the majority of people who come here are being denied. They’re not approving them.

They have powerful reasons to be leaving their country, but–

Yes, but COMAR is not supporting them.

Migrants have been discussing it amongst ourselves, and we encountered a family from El Salvador, a husband and wife who brought with them two minor children. He told us that they’d presented evidence, but that his process had been denied. So I really don’t have any certain understanding of why they are denying people. Because if they tell you that you don’t need proof, then why would they reject you? And even those who present them are being denied. That’s what they’re doing.

Evidence of what kind?

Evidence as to why you’ve left your country. For example, I’m Honduran. I’m from San Pedro Sula; it’s one of the most dangerous cities. I’m threatened by a member of the Mara 18, so I migrate to here [Tapachula, Mexico, on the border with Guatemala]. I couldn’t file a complaint because I was living alone with only my baby, and I didn’t have the courage to go and present a complaint. So, I saw it as more practical to leave the country, because I couldn’t go on living there when a gang member had threatened me. I knew that I couldn’t work—there are many of them, they’re all over the country—so my life was put in danger, and the life of my daughter. Better to leave. They knew that we were there. That’s why we came here. Because of that.

And if they reject your application for refugee status, what will you do?

If they deny me, I think I’d solicit a humanitarian visa, because I’ve already started the process. And if it were the case that I needed more help, I’d go to ACNUR [United Nations High Commissioner for Refugees/La Agencia de la ONU para los Refugiados]—that’s where I’ve been going, and they’re helping me a great deal. They’re working so that my visa will be approved. Because here [at COMAR], no—here it’s very difficult.

So ACNUR is helping you?

And the process that you’ve begun by interviewing, does it cover you or your whole family?

Just for me and my daughter, because unfortunately the rest of my family—my siblings and my mom—are still in Honduras.

In the same place?

No, in a different city. I had moved to San Pedro Sula for work-related reasons. I went looking for a job that paid better, but unfortunately I ended up running into something that changed my life, because—imagine where I am now. This is what happens. I believe—a woman working in immigration told me this—“You migrants, unite! Protest! Strike outside, passively, so that these people approve your cases. Because it’s not just that you should be made to wait three or four months—there are some who’ve waited five months—for them to approve you, and they give you a ‘no’ as the answer.” It’s deceptive! It’s deceptive...it’s deceptive. We’ve left our country, as you can see, and it’s difficult to arrive here, knowing no one.

I, in my case, if I could get to the United States, I would do it. For something better—for me, but above all for my daughter. A better future. Work above all, because my baby needs many things. I just had to stop giving her milk, because I don’t even have the resources for that. And it hurts me, because she cries; it really hurts me.

When you left, did you know where you wanted to go?

Are there people there to help you cross, or do you go alone?

There are some there, but some of them charge you. You have to run, because you have to cross the river quickly, in about 20 minutes. The first crossing, from Honduras to Guatemala, I did quickly, running some 10 or 15 minutes with my daughter in my arms so that migration officials wouldn’t catch us. It’s very hard...it’s very hard. As I told you, if I had the opportunity to go to the United States, I would do it.

But it’s worth it for my daughter. Because she deserves something better. The insecurity—I don’t know if you can inform yourself, realize what the situation is like in Honduras—it’s very bad. It’s horrible.

I was working; I was doing very well. This person—I don’t know if he’d been there for a few days, checking on my routes. I didn’t see anyone, but it becomes normal to you to come across someone covered in tattoos, pass them, and if they said something I wouldn’t have answered. But I began seeing him very frequently. I realized that, too often, I was coming across him exactly where I needed to pass. Until the point where one morning, I went outside, I encountered him. I was with my baby, he followed me, and he trapped me. So I started to tremble out of nervousness. And I started to cry. Because I have my daughter in my arms, and I don’t know what he was going to do to me. I start asking him in my head, because I couldn’t speak—asking for compassion, asking that he leave me and my child and let me go home. He was still there, and he took me by the arm and started saying things to me. “Do you know what I belong to?” And I didn’t answer him. “I belong to Mara 18, and you need to do what I say.” I just shook. The fear really took me over. I couldn’t do anything. Then two people went by, and upon seeing other people, he went away and left me there.

I went to my house. I sat. There’s nothing to be done; no one to turn to. If I filed a report, no one would come with me; it wasn’t a logical option. It was impossible. I couldn’t do it. These people, they have everything covered, all your movements, from the first moment they set their eyes on you.

They have resources you don’t have.

Obviously. So I reached out to a cousin who had just moved to San Pedro Sula, but in another neighborhood. I called her when I’d calmed down, and I told her, “Something horrible has happened to me,” and she got scared, and she said, “Come, wait there, we’ll go get you,” so I say, “I’m shaking. I’m here; my daughter is with me. I don’t know what to do.” So I took a taxi to where she was, and I began to calm down and tell her what had happened to me. And she told me, “We can’t come with you to file a complaint. Because if you report this, down the road they will kill you and your daughter.” They didn’t want to help. So I stayed there a month without working, because I couldn’t leave the house to work. I knew that somewhere, I’d encounter him.

After a month, my cousin gathered up her money, and she said, “I’m going to lend you money so that you can flee.” And I agreed. All this time, my mother didn’t know what was happening. So when I got here, I called her and told her. And she got very upset. She got very bad. I said, “No, mom, it’s okay, don’t worry. We’re already here in Mexico. If they help us, great. If not, I’m not coming back, but don’t worry." She was in bed for almost a week. It really affected her...it really affected her. She had been wondering why I hadn’t called. She was waiting to hear from us, and when she heard she felt completely terrible. I don’t have a phone, but when someone allows me a call I call her and tell her we’re doing well, and she tells me, “Yes, daughter, I’m always praying to God. I know that he works many miracles.”

Thank you for sharing your story and your experiences.

Thanks to you for taking the time to come here and inform yourself about our problems. I hope, too, that you can help us in some way. Thank you...a pleasure. 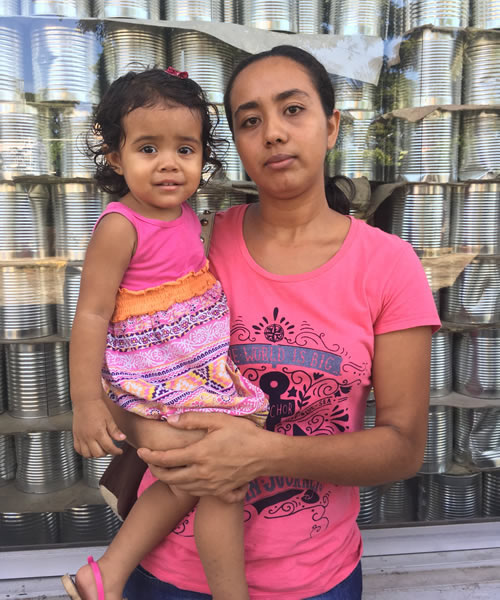