Background: As part of the Education and Social Justice Project, in July 2014 undergraduate student Gianna Maita interviewed Padre Fernando Cardenal, S.J. In this interview, he discusses his time as the minister of education during the first part of the Sandinista revolutionary government, solidarity on the part of Nicaraguan youth, and the current state of Nicaragua’s Ministry of Education.
What were your responsibilities as minister of education during the literacy crusade?

That was during the third ministry. When the triumph of the revolution came, they told me that they had promised the campesinos that they would launch a national campaign so that all Nicaraguans could read. So they told me that now that the Sandinistas were in power, it was time to fulfill that promise and that they thought I could organize this campaign. I was feeling two things at this time: the first, a sensation of satisfaction…but I also felt so much fear. I had never organized anything and this was a big task! They had given me the order but they did not give me money [to create the campaign]…There was no money; it had only been ten days since the victory [of the Revolution]. So they gave me the order but they didn’t give me money, and this made it very difficult to organize. So I felt happiness and fear.

…We had the support of the youth and their volunteer service. Volunteers went to the mountains for five months and lived in the houses of the campesinos to teach them to read. There were 60,000 volunteers in the mountains and 40,000 in the neighborhoods outside of cities, youth and also adults.

How does this part of Nicaragua’s history, with the “popular literacy armies,” affect the participation and solidarity of youth in their communities today?

The youth that went to the mountains are marked for the rest of their lives…they were youth that came from the city, from far away; they did not know anything about the lives of poor people living in rural areas. They did not know anything about poverty in this country. They lived for five months in the house of a campesino, understanding the lives of the poor. They were transformed in solidarity. They began to worry about the people of their country, about the future of their country. Their housing situation brought about strong relationships: the campesinos called the youth “son” or “daughter,” and the youth would say, “mother” and “father.” This was the relationship…This helped their engagement, because poverty is not pretty. When the youth had to leave, they and the campesinos cried about separating. Many of them returned to visit their father in the mountains. I know some who still do…It was a profound experience of understanding the people and their economic situation, but it was also one of love.

…I have some friends who were youth in the crusade, and their children have received the values [they acquired during the literacy campaign]. For example, some work at TECHO as volunteers, building houses in the poorest areas.
…Here there is a crisis amongst young people. When the corruption of some of the higher-ups in the Sandinista Front began, the youth stopped being involved in politics because they had seen their brothers, cousins, and friends dying defending the revolution. And now this group that had sent them to fight is corrupt—they only think about money. They became disillusioned; they lost the vision to do something. It was very sad for me that these youth are apathetic.

Five or six years ago, I was in Spain and after presenting they asked me, “How do you keep hope with the political disillusion you have had during the last few years?”

...Here [at the Universidad Centroamericana, Central American University], Campus Ministry has groups that do volunteer work every week…They give math classes to the poor or go to prisons and activities like this. There, students are volunteering. What they are doing are social works. I am sure that this is more profound engagement. This is human solidarity. Students are also going to TECHO for more profound engagement, until it becomes political engagement. I am sure that what happens at TECHO is the same as what happens with the student volunteers at Campus Ministry.
This interview has been helpful for my understanding of education and social justice in Nicaragua. Is there anything you would like to add?

Education [now] is a disaster, it is very bad. The minister of education never meets with anyone. I have asked her for a meeting about a multi-grade, national program in mathematics. She never answered me. I asked my friend if they could get me a meeting with her, and they told me, “Don’t worry, it is not you. She doesn’t meet with anyone.”

How can you improve education in a country with grave problems if you do not hear about the state of education? My friend told me, “She is not interested in NGOs or embassies, only in what she thinks.” …The minister has never even given a press conference about education.

…The ministry is not allowed to speak to journalists, only [Rosario Murillo, the wife of the Nicaraguan president] is allowed to. Every day she speaks to the country for 15 minutes. But the ministries of the state cannot talk.

…I was the minister for six years. I never made a decision [on my own] except for one time…All of the other decisions were made in a team, and always in consensus. I can think well, but if other people help me think, we will be more successful. I know this. I did it for six years. 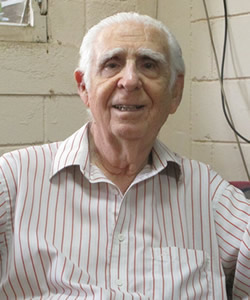