Background: As part of the Education and Social Justice Fellowship, in May 2017 undergraduate student Mary Breen interviewed Jackson Lorrain, who works in the Migration Department of Border Solidarity (Solidaridad Fronteriza) in Dajabón, Dominican Republic. Lorrain, who has witnessed the mistreatment of rural workers, explains his work accompanying, organizing, and training people who work in the countryside surrounding Dajabón. With the resources and methodology of Border Solidarity, he works to promote human rights, labor rights, and the empowerment of workers.

You work in the Migration Department of Border Solidarity and are a leader in the Solidarity Association of Migrant Workers of the Northwest Line (Asociación Solidaria de Obreros Migrantes de la Línea Noroeste, ASOMILIN). Can you explain the work that you do?

ASOMILIN is made of 10,000 members. With the opportunity to travel to Brazil and Chile, many have left. Right now, we are restructuring the associations. ASOMILIN is in restructuring. Our organization began with the celebration of the Word of God. Border Solidarity began to visit communities where immigrants work in plantations of bananas, melons, sugar, peanuts, yucca, and livestock. These people made up our entity, so our members are all workers. Women do not work because they cannot find work and are undocumented. At the beginning, we started with a majority of undocumented workers.

We start by giving them a moral document which is the identification card of ASOMILIN. This document has moral weight. It means that this person is a person of dignity and a person worth defending because he is a worker. Since the majority of the people of ASOMILIN were undocumented, we helped them. We began with a database of workers with facts, including when they entered, where they came from in Haiti, where they live and work in the Dominican Republic, the name of their Haitian family members, and their dates of birth. We have physical copies of this data in the office of ASOMILIN, in addition to the database. We began with the intention to let them know their civil rights and their rights as workers. There were many problems in their communities with the military and also in their work.

We accompany and defend them the best we can. We have a lawyer to help them and accompany them to court. We respect both sides, teach them, meet with them in groups, and visit their communities. We give talks about human rights, organization of groups, labor rights, and the school of pardon and reconciliation, where we teach them what forgiveness and reconciliation are and how to reconcile with their neighbor. After we have organized groups, Border Solidarity accompanies them with its lawyer and teaches them their rights as workers. If they have any problems, we provide help for them. We also have various monitors to observe the community to see if the group is functioning well or not. The monitor accompanies them. If I think it is necessary for the lawyer to go to court with a worker, the lawyer accompanies him. We meet with the Dominican authorities to explain to them the situation of the people. We also meet with the Haitian consulate to help members of ASOMILIN get their birth certificates. Each one of them gives their name, address, and date of birth. The Haitian official from Wanament comes, and we distribute the certificates to the members that do not have them.

For example, right now I work in the office to get passports. There is a project in Haiti to get birth certificates to people. We are helping members get their birth certificates so they will be registered in the 2017 census. With their birth certificates, they can also get a Haitian identity card. We used to have a program with Haiti and the office of identification, in which we could easily find the information of our members. With them, we coordinated the identity card, but right now we are not able to do this because we do not have that program. We are trying to find ways to achieve this type of work again. With these documents that we bring to the members, Border Solidarity always helps them with a project. Once we get the Haitian passports, we talk to the Dominican consulate located in Haiti to get visas, and then we meet with the Dominican authorities to let them know what we are doing. We always have meetings at the office, and we meet with the consulate and the communities.

We have been in this fight for many years since the beginning of Father Regino [Martínez, S.J.], who was the first director here in Border Solidarity. Father Regino was always accompanying them to the meetings with the civil society and the military authorities, also with immigration officials and leaders of the armed forces so that they know what we are doing. With the plan of regularization that began in 2014, people did not know what was going to happen with their passports that only had one or two years remaining on them. Even still, we are working in favor of human rights and workers’ rights. Our work is to serve, defend, and accompany. We are always here to accompany the community when they have problems with violence. We are always there to give our help. This part—the violence—is the more vulnerable part of the Haitian immigrants. Our work is with human rights, labor rights, and the promotion of workers.

We had a Christmas trip across the border. For the holiday, a group of our members took a bus to the border so that they could cross without a problem, without pushing and rules. They were asking permission from the authorities to cross the border and to return. We went to that side of the border in the bus and asked the Dominican officials' permission because these were Haitians who worked in the country. We spoke to them, to immigration, and to customs so that they knew the situation and could support us always. Many things occurred. For example, in 2009 we were at the border for a day and a half, since ASOMILIN members used to go across with their identification from the association. They then had problems with the authorities, who said they could not cross with this. We talked with the authorities a lot, and then they accepted that they were workers here. They were able to cross. Many people were going in and out with these identification cards, but at the same time they were not legal identification cards. They got the job done.

On January 5, 2013 there was a problem when the Dominican authorities did not allow them to go across anymore, so they had to stay six days. They came to an agreement, and the Dominican authorities gave them a passport and a visa for one year to each ASOMILIN member on the bus who were workers. Since they have the passports, everything got settled; however, then they started traveling further to Brazil and Chile. They were coming in and out too much. New people are coming, and we are doing the same stuff again. Now, we are accompanying, helping, and visiting the communities and groups that we have.

What role does education play in this situation with the workers, especially those who need to know more about their rights? Also, is there an element of societal education in terms of educating the larger population about the abuses and threats to workers’ rights?

Yes, there is more education now, which reinforces the capacity of workers. At the beginning, people did not have knowledge of their rights, and now they are able to go to court themselves with the help of Border Solidarity and its lawyer. Due to the talks, workshops, and training of Solidaridad, many more workers are capable of defending themselves. However, before we had this entity, they did not have the right to defend themselves. At any moment while they were working they could be thrown out without incriminating their employers or saying anything. Their rights began to be respected, so we were very happy with the work of Solidaridad, which came to accompany the people of the region. The work that is done here is very good. We win the vast majority of cases submitted to the court by workers and immigrants with the support of Solidaridad.

Can you explain the main reasons why workers’ rights are being abused and threatened?

Many companies and many employers work with the Haitians because they can pay a salary that is better for them. With Dominican workers, you have to pay a minimum amount and ensure they have some food, and they should have social security. In this sense, the employers here recommend working with Haitians without documents, because when you have documents they have to provide all of the services. Right now, they are not happy with what we are doing—teaching the workers about their rights. They are not in agreement with this, but we are doing it.

Are there immigrant workers from other countries that receive the same treatment from their employers?

The situation is with the Haitians. Haitians make the situation because they must come to work. Now, there appears to be another nationality coming, since many Venezuelans are coming to work. There are also other people that are working in the country, but they are girls practicing things like prostitution in the areas of tourism. In this area in which we are working, they are Haitian workers. They are from the northeast of Haiti, and they face more rejection, although they are workers.

Do you think it is important that Border Solidarity is Jesuit? What influence does religion have in this work?

The Jesuits are doing very good work, specifically for organized groups and at the border where there is enormous work to be done. Their work is very expansive, since they work not only with migrants here but also with farmers in the countryside and with both sides. I have seen that the work being done by the Society of Jesus is very good and enormous. They accompany, serve, defend, and teach how to live and share.

What would you specifically like to see change in the future to improve the situation of the workers?

To strengthen our associations, we need to train people so that they understand the laws and realize that they are bridges. We have to teach those that come because it is important work. We who are poor improve when organized and not alone. It is a better life when we live in organized groups. Since Border Solidarity was founded, the people have been able to get to know each other this way. In past years, immigrants did not have the right to walk in the streets. Sometimes someone lives on that side of the border and another person lives here in Dajabón. They are not able to know each other because they do not have a mobility route, and they need to pay a lot of money to cross. For example, a Haitian migrant needs to pay RD$100 to cross, and without papers needs to pay at least RD$1,000. So, the work of Border Solidarity is very good. 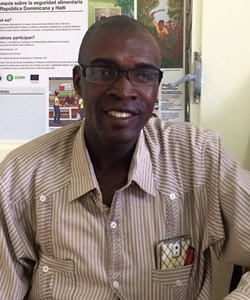 Promoting Justice through Education along the Dominican Republic-Haiti Border