Background: As part of the Education and Social Justice Fellowship, in June 2016 undergraduate student Carolyn Vilter interviewed Lorena Cano and Diana Martinez, lawyers at the Legal Clinic for Refugees in Mexico City, Mexico. In this interview, Cano and Martinez discuss their work and highlight the broader role lawyers can play in Mexican civil society to influence legislation impacting refugees and migrants.
What is your position in the clinic?

Lorena Cano: We’re both lawyers, and we will be supporting classes in human rights of refugees. We’re going to be representing cases and provide advice [brindar acesorias] to people soliciting asylum here in Mexico.

Cano: It could be any city. The idea would be to go to the states to represent the cases.

Who will participate in the clinic?

Cano: Students who complete their social service requirement with us; or sign up for Matters of International Refugee Law (Materia de derecho internacional de refugiados), which is part of the bachelor’s in law; or volunteers.

Are you going to help the students? Who will primarily direct and do the work involved in the cases?

Diana Martinez: The students, principally. Our work will be accompanying them, and giving them the theoretical part. Those who are already involved in the discipline will already have more skills and abilities. For those who aren’t, we’ll also serve as technical advisors. We’ll carry out the cases in conjunction with the students, but the idea is that it be the students who really accompany the cases.

Who came up with the idea of the clinic? I know it’s just opening. How did it all start?

Martinez: The Universidad Iberoamericana applied to ACNUR [United Nations High Commissioner for Refugees/La Agencia de la ONU para los Refugiados], who periodically call for refugee-related projects, and presented a proposal to open a clinic. It’s something that the IBERO hadn’t done before. The idea is to have a space in which the students can learn about the international rights of refugees and also practice them with real-life cases.

Is it typical for IBERO to have a program that’s this practical? That allows students to do real-life work while studying? Or is it a new idea?

Cano: I think the IBERO is new—it’s the first clinic class, at least here in Mexico City. But there are other universities that do have many clinic classes, and they’re mandatory, not optional. ITAM [Mexico Autonomous Institute of Technology/Instituto Tecnológico Autónomo de México] is one; UNAM [National Autonomous University of Mexico/Universidad Nacional Autónoma de México] is another.

When are the students going to start? This coming school year?

Cano: We had our first group of students this summer, in June, but in a normal class. Now, from the fourth of August to December, the social service students are going to start working in the clinic. Diana already did a visit to a shelter in Tabasco with students from the class.

How can the students visit migrants and visit shelters and do this work while taking other classes?

Martinez: Well, this summer we were able to take advantage of the students being on vacation, and we went on the weekend. Many of the students also work, because they’re in their final semesters. So we’ll need to adapt ourselves to the availability the students have to participate, and do the visits that we lack—because we still need to do more visits to shelters.

Have the two of you worked on this issue before? How did you arrive at this clinic?

What inspired you to do this work with migrants? Why do you do it?

Martinez: Well, in my case, after a long time getting to know the situation with refugees in our country, I think one of the things that motivated me to become part of the clinic was the fact that, over all these years, we’ve seen that lawyers aren’t a professional group that gives much time to social service work. It’s uncommon for lawyers to be in civil society organizations, so it’s very hard for refugees to have access to a lawyer during their legal process. So, knowing that being here at the IBERO would be an opportunity to instill the theme of international protection in students beginning in undergraduate, so that they can dedicate themselves to the theme farther along in their careers—if not specifically in migratory asylum, at least some kind of pro bono work, or a relationship with some organization, or providing technical advice. In the end, this [is a] necessity to begin in universities—because we didn’t used to have these types of courses of study in the university, and I think our motivations would have been different if we had. We worked a lot on skill-building for the job, and I also liked the academic angle a lot, and this was the combination that interested me—being at a university teaching classes, and at the same time instilling the theme of asylum into the students.

Cano: My discovery of the work was really circumstantial. A teacher invited me to collaborate with Sin Fronteras, and being there, I fell in love with the topic and all its implications. Migrants are doubly vulnerable in their position. There isn’t anyone who supports them, who advises them, anyone to whom they matter. It’s not like speaking about children, or about indigenous people in the case of Mexico. Migrants are in a bubble, in a situation where they can need something but not ever get it. So I really like the topic, and I’ve specialized more and more in the representation of refugee cases, and now my professional objective is to contribute to changes in the criteria, perhaps not of the law, but definitely in the criteria employed by judges. Have an influence by causing judges to see more cases, resulting in a bigger social impact.

Many people have spoken to me about the idea that “refugees” in Mexico are defined in a narrow way—that you need to meet a defined and restrictive list of requirements to be designated a refugee. So many people are in very urgent positions and can’t return to their countries, but still don’t qualify as refugees.

Martinez: Many do qualify. I’d imagine that the people who told you that are working with people on the migrant route, and that’s something we’ve been fighting with a lot—the fact that the refugee condition isn’t a migratory status, and it’s not about filling requirements, but instead is a human right to access international protection from Mexico. But this intersects with lots of things.

Mexico has a list of 11 motives that indicate that if you’re in Mexico and can’t return to your country for one of these 11 reasons, then you have the possibility of staying in the country. These 11 motives, rather than limiting, rather than being a list of very few requirements that if you don’t meet, “¡Adiós!” —it’s not like that. One of the motives that can allow a person to be recognized as a refugee is violence—that in the home country, there is generalized violence, large-scale violation of human rights, and situations that gravely affect public order. So if you look carefully, these three reasons motivate many of the people who are leaving. So many people can enter under this motive. 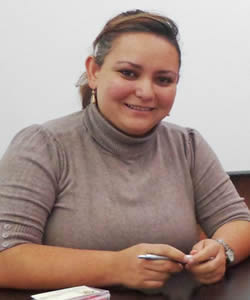