Background: In early October 2013, Georgetown undergraduate student Joelle Rebeiz interviewed Mary Ellen Giess, a freelance writer and the chief of staff and lead strategist for the Interfaith Youth Core (IFYC). In this interview Giess discusses her work at IFYC, the importance of campus engagement, the impact of interfaith education on every facet of society, and the role that college students play in interfaith initiatives.

What brought you to interfaith work?

I grew up outside Philadelphia with a pretty liberal family—both religiously (I was raised Unitarian Universalist) and politically. I went to school at University of North Carolina at Chapel Hill, and the South is traditionally more of a conservative place. Even though Chapel Hill is a fairly liberal oasis within the South, the broader community is much more conservative than what I had been accustomed to.

One of the first experiences I had with the campus was through our summer reading requirement. The book that they chose for my incoming class was Approaching the Qur’an by a scholar of Islam named Michael Sells, and it was such a controversial choice that the state actually threatened to cut off funding to the university because the book was seen to promote Islam. When I arrived on campus there were news trucks everywhere, and media outlets were trying to interview students to get our perspective. There was a huge controversy that followed, and a couple of students actually brought a lawsuit against the university because of the book.

I had actually really enjoyed reading the book; part of the Qur'anic experience involves listening to the text in recitation, and the book came with a CD. I was really moved by listening to the surahs and the beauty of the recitation. I was shocked when I arrived that this sparked such a controversy on campus—and I was shocked once again during our group book discussion to see that the controversy hadn’t been addressed at all by our facilitators. Everyone really focused on the text, and what we had learned from the reading—which was good, and probably the way they intended the discussion to go—but in light of the controversy, it just seemed like such a superficial experience. There were literally camera crews on the front steps of the building in which we were discussing the book, but no one was recognizing it.

It was in this environment that I began to feel like I was surrounded by religion, but it wasn’t being addressed by anyone. There was nowhere for me to go to have conversations about it.

How did you transition from campus life to interfaith work?

After UNC, the only place where I felt like I could explore some of the many questions I had was in the religious studies department, so after college I decided to go to graduate school.

I really wanted to get out of the South—I kept thinking “Get me back to the North, where I can be back with my ‘people;’ with the ‘Yankees,’” as they called me in Chapel Hill. So I enrolled at Harvard Divinity School to study religion further. But I remember one day sitting in a class about religion and the constitution, and hearing the people I considered "my people" talking about "those crazy people" down south who had religious beliefs. I remember being struck by their comments, and by their reference to faith as so alien. But because of my experience at UNC I knew that peoples’ religious beliefs were deeply held, and fundamental to who they were. I had had close friendships with people who had deep and intense relationships with their faith at college. But all of a sudden I found myself surrounded by people who where echoing my own pre-college beliefs—that religious belief was somehow strange or weird—and I realized that I had changed. Suddenly I became the crazy divinity school student talking about the importance of religion, religious belief, and religious believers in our diverse democracy. It was then that I recognized the importance of appreciating religious beliefs, and the harm of writing these off as some crazy thing. This issue was something I wanted to explore, and help the country proactively engage with in a positive way.

I was lucky enough to find the Interfaith Youth Core, which gave me the very exciting opportunity to broach the topic in a meaningful way. Specifically, I got the chance to work within the sector of higher education, where so much of my experience had been. Working here, I get the opportunity to work not only on issues that I care deeply about, but in contexts—college campuses—that shaped so much of what I believe today.

Why do you think college campuses are a good place to work on facilitating interfaith engagement?

We see that college campuses have the capacity to shape the future leaders of civil society. When you look at social change movements in the past, you can see that both college students and institutional leadership have been the driving force for change. For example, with the Civil Rights Movement, college students were among the key leaders and foot soldiers of advocating for civil rights in the country. After that push, institutions of higher education started quickly realizing the value of implementing programs centered on multiculturalism and diversity. The same can be said of the environmental movement today: students have led sustainability initiatives, which universities have begun to implement as key parts of their institutional strategies. On the other hand, when higher education prioritizes a certain agenda, the students learn to make it a priority as well. And then, when students graduate, they bring these ideas into the realm of civil society with them.

On another note, we know that coming to college, and being in a campus environment can lead to powerful individual transformations. Often, college is the first time that students interact with people of different backgrounds, and really start to question and establish their beliefs. Knowing that this is a time of great reflection and self-identification, we believe that interfaith initiatives give students the right tools and framing to think about how they can positively develop their own identities, while also learning to engage positively with others.

Part of the reality of living in America today is knowing how to engage successfully across lines of diversity either because of, or in spite of, your own deeply held beliefs. So whether or not students are interested in fostering the skills to deal with diversity, these skill sets end up being critical for success in the future.

What has been the biggest obstacle that you’ve encountered?

One of the biggest challenges has been helping non-religious and secular communities feel welcome and relevant in these discussions. IFYC has always emphasized the importance of including both religious and non-religious people in interfaith programing, because from our perspective, those values are just as deeply held as religious values. Being able to draw a wider circle is critical to our overall success. But there is often a feeling of marginalization—non-religious and secularist participants feel that they are unwelcome in religious circles. We all need to make an effort to include people from different backgrounds.

There is also a question about terms. When we say "interfaith," it often signals to people that don’t identify with a particular faith that they aren’t relevant to the discussion. It’s really important to be clear when we use certain words—and this means reaching out to people of all religious and non-religious communities so that they understand that they are welcome, invited, and can play an active leadership role in these discussions. We really need to go the extra mile to make sure that everyone feels welcome and accepted.

So what would your advice be to the students who are trying beginning to be interested in this type of work?

That’s an easy one! Come to the IFYC Interfaith Leadership Institute. You’ll get the skills not only to run these kinds of efforts on campus, but also to connect with other students that are passionate, motivated, and inspired about their engagement. It’s very exciting that we’re starting to see the interfaith movement—especially among student leaders—spread and gain traction. More and more people are looking to become a part of the movement, and spread it.

To learn more about the Interfaith Youth Core Leadership Institute, check out their website. 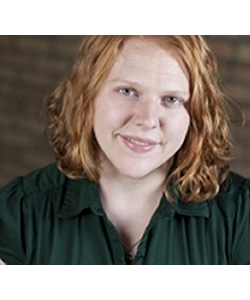