A Discussion with Robert Cekuta, Deputy Assistant Secretary of State for Energy, Sanctions and Commodities

Background: As part of the Future of Track-Two Diplomacy Undergraduate Fellows Seminar, in spring 2011 Nora Hajjar interviewed Robert Cekuta, deputy assistant secretary of state for energy, sanctions, and commodities, about the intersections of U.S. foreign policy, religion, and track-two diplomacy.

Please tell me about your current responsibilities and how you got to this position.

I’ve worked mostly in energy and security both in the United States and globally. I have worked in imported oil and sanction policy. For example, I’ve worked with Iran in measures to take to convince Iran not to create nuclear weapons. In Libya I’ve worked with them so they can take control of their own country. I’ve worked on economic sanctions, commodities, and conflict diamonds in Africa. I’ve worked with Liberia in the 1990s with the conflict diamonds so we are able to better distinguish where the diamonds come from. This is why the Kimberly Process came into place. It is a way for governments and non-governments to work together to identify where the diamonds have come from. In Zimbabwe, recently, I worked with them in their new diamond field. Recently the military drove out people who had found diamonds and were working there. We want to make sure the diamonds in Zimbabwe are acceptable and that we know where they’ve come from. I have also worked with the conflict minerals in the eastern Congo and the shortages of earth metals, which are used for micromagnets. Currently the Chinese produce 95 percent—they priced everyone else out. I’ve worked 30 years in the department, mostly in [economics]. I have served in Yemen, Swaziland, South Africa, Iraq, Albania, Germany, Japan, and Afghanistan through the Foreign Service.

As you know, I am in a class studying the intersection of U.S. foreign policy and religious factors abroad. In your experience, have you seen intersections of religious identity and faith with certain topics, regions, or policy issues?

Yes, especially in the Middle East and the changes that have occurred over the decades. In Yemen, the conflicts with the Sunni and Shi'as escalated in the late 1970s. This is around the same time as the overthrow of the shah in Iran. After these actions in the 1970s, the role that Islam played changed; it became part of foreign policy. Islam became an ideology rather than religion; it became a point of greater conflict. This isn’t just how the rest of the world begun to perceive the Middle East, but it’s also how the Middle East begun to perceive itself through the Shi'a/Sunni conflicts. Islam begins to be perceived in a way that is not fair. We begin to profile individuals. If someone has a hijab on, what does it mean? It simply means that that person is more comfortable with it on. In Afghanistan most of Western women there would have a long scarf on because they felt more comfortable in the environment. Today, the way we deal with Islam has become a threat/standing up for what we believe it, certainly much more than before. We consider Islam in foreign affairs much more today than in the past. In Albania, religious identity also was difficult. While Albanians chose to identify themselves as Albanians first and then by their religion, it became a point of contention in the 1990s as Greeks wanted to identify Albanians to be Orthodox, when in fact they weren’t. Americans are certainly more comfortable in dealing with religion in foreign affairs than Europeans. This is because Americans have values and human dignities in the way that we handle foreign policy. This becomes very important to the United States both implicitly and explicitly.

Tell me about how your training prepared you to work in the highly religious environment of today’s world.

Prior to going to Yemen as a Foreign Service officer, I had to attend an area studies course where I was taught about Islam and how to behave. As a class we went to the mosque on Wisconsin, and we learned how to behave in a mosque and how to treat the Qur'an. Prior to going to the Balkans, I received training on Orthodox [Christianity]. Even though I myself am Catholic, I was still trained on Orthodoxy. This happens before people go to India—they are trained on Eastern religions. Training on religion includes learning about the belief structure, how it is applied, what it may mean, how to respect it.

Some people suggest that within the U.S. government there are many obstacles to learning about religion, as well as barriers to engaging with religious actors abroad. What has been your experience?

I don’t believe that. President [George W.] Bush especially put effort towards dealing with faith-based organizations oversees. We have worked with Catholic churches, Caritas, and World Vision. This does not mean nineteenth century proselytizing, but they want to help because it is part of their values. Caritas has often been a contractor. For example, Caritas was a contractor in the Kosovo refugee crisis. Even though Kosovar Albanians are Muslims, Caritas still aided. It provides help to 400,000 Kosovar refugees in Albania. Caritas provided a lot of help, as Albania is a very small country itself. This did not mean they participated in proselytizing. We often rely on faith-based organizations.

Can you talk about what the term reconciliation means to you?

Reconciliation is moving forward without having to discuss full on forgiveness. This is what you saw in post-Taliban Afghanistan. This is also what you Europe do after World War II in their actions towards Germany. You recognize there are great tensions, but you have to move ahead. In the Catholic Church this is especially true because of absolutism, but other religions don’t have that. In the Catholic Church it’s based on values of human dignity and recognizing that people are something: do unto others as you want them to do unto you. In the Islamic faith you see the need for brotherhood, being part of the ummah, the religious community. This is also about finding a way forward. Presidents Bush and [Barack] Obama both put a lot of effort in claiming that Islam is not a violent religion. Despite what happened in 9/11, this was done as an effort to move forward.

What specific role is there for civil society and religious actors when it comes to diplomacy and peacebuilding?

Governments can only do so much. Governments act top down. Civil society can provide the mechanism for society. We work and use civil society in development as a way to get things does. Civil society helps to recharge things. Civil society works through some of the transitions. They work on how countries can reform themselves and learning how to trust people. Pope John Paul was a symbol of what Poland could be. He was a rock star persona. Poland breaking away set the rest of communist countries shaking. Today, we have young Mother Teresas. However, you can also have negative examples. Madrasa teachers might not be well educated and they teach interpretations of the Qur'an which might be manipulations of the words in the Qur'an.

Are there examples in your career when religious factors hindered or aided U.S. policy?

Iran. Religion became an opposition tool against the shah. Many ayatollahs agreed with Khomeini, while others didn’t. This is also the case today with [Mahmoud] Ahmadinejad. A positive example is the relation with Pope John Paul II. Also, our work with a rabbi who is into interfaith understanding in the Balkans has helped.

Over your career, how has the U.S. government’s awareness and/or response to religious factors changed (or stayed the same)?

Now, we are comfortable talking about religion. In the past this wasn’t the case, partly due to the separation of state and church.

What is the current relationship between the government and religious communities?

How are some ways government officials, such as yourself, promote civic engagement, public service, peacebuilding, diplomacy, and positive relations among various nations and communities on a global level?

All of the above. Diplomacy is about having a change in behavior. You’re moving things a certain way. In the [Quadrennial Diplomacy and Development Review, QDDR], Clinton discusses how more focus needs to be put into development. The QDDR is not just writing a treaty; it’s working with people and long-term goals to the U.S. The QDDR is just a study, just a beginning, a blueprint for the next six months. It discusses things that we need to improve on, explaining why faith-based organizations are not addressed.

What are some recommendations you would offer to better engage civil society in track-two diplomacy? Which kind(s) of approach(es) would you suggest in order to particularly target the youth to become more involved in this important process of building bridges between people?

Often with organizations and civil society, you notice extreme points. You have to be careful—obviously you want to initially aim high, and that’s not a bad thing. However, you have to realize that not all the goals can directly and initially be met. Some recommendations are realizing where the strength of civil society is and where the strengths of traditional diplomacy are. This is great because they complement each other and don’t do the same things. Civil society shouldn’t be ambassadors, but it can do certain things that governments can’t. 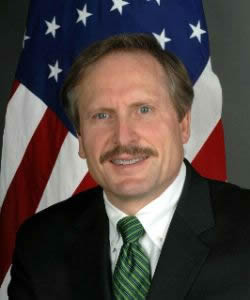