What is your official job title and what responsibilities does this role entail?

My job title is program manager for faith and justice. One responsibility is to provide direction to the program. For example, I have to engage in strategic thinking: How can I implement these activities or these particular projects? Also, I get actively involved in the formation of different groups in the Church social teachings (CST) because that’s the value base for our work. Furthermore, I am involved with resource mobilization. We have to think about what programs we want to do and how we are going to do them. I have to be active in helping to get resources for the program.

What is the overall goal of your work with the Faith and Justice Program ?

The overall goal is to offer a [Catholic Church social teachings] framework. Remember, JCTR is about promoting faith and justice. The faith aspect should come out, although it might not be all “God loves you.” It’s modeling what Jesus did. He provides a spiritual side and he provides us with values. Those values should see themselves translated into action. That action should be: How are other people enjoying their rights? We like people to actually know that we are promoting faith that is doing justice. We really want the “why” and the value aspect of our work to be emphasized.

[With the Faith and Justice Program], I’m not just talking about active participation and active citizenship. I’m talking about active citizenship so that the dignity of the human person can be realized. We focus on governance and human rights issues because governance is so significant in the realization of development itself. Governance is people making decisions. It's also demanding that decisions are actually for the good and promote dignity. I’m sure you’ve seen some of the houses with five people living in one room divided by a curtain. That obviously doesn’t encourage the dignity of the human or their right to privacy.

Under that framework of faith, justice, and human dignity, what is the primary programming you’re implementing?

The programming is CST-mainstreamed. When I'm thinking about encouraging people to participate in a particular political process, for example our access to information programming, this work isn't just for political reasons. When I'm reaching out to individuals in terms of education, there's a certain amount of empowerment for them. For example, in Monte, JCTR provided a forum where ordinary people can come and talk to duty-bearers. If they went on their own as individuals they may not necessarily have the skills. Even if they did have the skills to go and say, “You know this is not happening,” they may just be asked, “Who are you? We are busy.” But because JCTR facilitates this process, then people feel a certain amount of empowerment to say, “Okay, we can actually sit at the same table as people providing services for us so that we’re able to [provide] input into that.”

You talked about the advocacy, education, and empowerment. Are there any other strengths that you see really standing out from the faith and justice work?

I think it’s just the fact that we focus on key human rights. We are looking at this legal framework because they have implications on how people live. If you look at the Public Order Act, political space cannot be reached if other political parties are not allowed to participate. Even if you come and say, “free and fair elections,” in a sense they’re not free. So it’s pretty much again about providing spaces for people to participate. It has been quite significant and in other ways promoting human rights and good governance.

On the other side, what are the greatest challenges that you face in Faith and Justice programming?

The greatest challenge is with advocacy. I go to Kasama and talk about the Public Order Act (ATI). People appreciate it conceptually. They say: “This is a very good act.” But then every day their priorities would be: Do they have food? It’s possible that they see the ATI as far removed from what they want now and their immediate needs. In the follow-up, particularly at that level, it becomes a bit difficult to measure and discuss results. Okay, we held a radio program. We brought these stakeholders and they talked about this issue. Is this really translating into people’s lives changing immediately? It’s a challenge.

I worked with Jesuit Refugee Service, and I was doing also advocacy. There, we would go to a meeting with the United Nations High Commissioner for Refugees and the governments of Angola and Zambia and [discuss the] general repatriation process. Usually people are repatriated in June; June here is the cold season. NGOs and UN bodies see that it’s very cold, so they go into their cars and let the engine run. They’ll be warm, but there was nothing for refugees. They wouldn’t do that. Then we’d go and say: “You know, let’s find [a way to] collect firewood so the refugees can be [warm].” When that happens, you see the immediate result.

But with this sort of work, it’s a big challenge. We’ve been talking about access to information since 2011. Resources go into these processes and yet they’re not moving. You look at the amount of money that we have spent. We have media and live [programming]. We go to the chiefs and we gather maybe 500 people from the village; everyone comes and we have to feed them. We did that throughout the country. That’s a lot of money going to this process that might not even [create the intended result]. I begin thinking, “Oh my gosh, maybe this money could have gone to building schools for the children out of school.” I think it is a challenge.

Are there any particular success stories that stand out to you?

I think it all comes down to the fact that we provide platforms where people are awakened to an issue. JCTR enjoys some legitimacy among the people. If you’re talking about the Public Order Act, everybody gets to say, “Okay, JCTR is talking about this, then it must be an issue.” Catholics generally don’t talk about the value base often. So, when we approach it that way, some Catholics believe it’s quite significant. People begin to see the reason for participating in a referendum from a spiritual point of view. They would say: “I am my brother or sister’s keeper, so I should get interested.” They are no longer just saying, “Ah, politics, this is dirty so I won’t participate” or “We don’t get anything from voting for these leaders who don’t do this.” When we engage people as JCTR, we help them to see the reason why they should participate [in politics]. Even if they are frustrated with the conduct of politicians or seeing no results, at least they can say: "Okay, it’s for the good of other people."

How do you think that JCTR being a faith-based organization influences how it connects with the community and the government?

It all goes back to the Church social teaching. But beyond that, generally in Zambia if you’re a Church person you enjoy legitimacy. People will often say, "If it’s coming from the Church, then it’s authentic." That legitimacy gives us a good foundation to engage with the community and with funders. I’m sure for many funders, we receive money because we are transparent about our accounts. We have a culture of sincerity in how we work. We also have a culture of accountability and authenticity. This helps people to say, "We can trust the Church."

Have you found that working so closely with the Church social teachings on a day-to-day basis has influenced your faith in any way?

Actually, the Church social teachings have influenced my position on the Catholic Church. I love the Catholic Church to bits. During my formation, the framework on social justice wasn't emphasized. However, learning more about their framework of social justice has made me so conscious of questions such as: Who is suffering? Whose rights need to be promoted? Who is going to benefit from this? Are basic voices being included?

I’m part of the Pontifical Commission for the Protection of Minors. For me, the idea of wanting to advocate for children's rights came from JCTR. In my appreciation for children, I’m all the time trying to use the CST. I’ve learned to appreciate that faith is not about sitting and saying “God, please give me this and that." Instead, faith is doing justice. 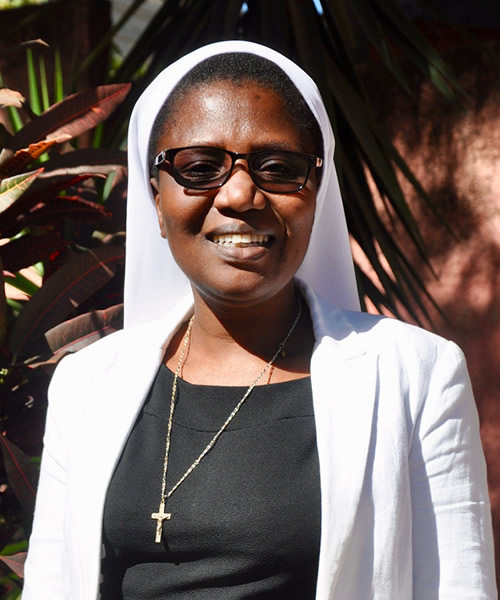